Some Testimonies from Thessaloniki

Oral Testimonies of the Jews from Thessaloniki about the Holocaust. What’s this you ask? This is the book we are going to focus on this time. As survivor testimonies are very important for the official storyline, it’s clear that the more of them we examine, the closer we get to the truth. Testimonies are also a big hurdle for many people to even consider taking a look at Holocaust revisionism, as they tend to think that so many survivors cannot possibly be lying. They can’t be blamed for that, and indeed, most of the survivors are certainly not lying. The problem is that very few people have actually read a single testimony, and those that have done so, did not do it carefully. So, let’s get down to it. 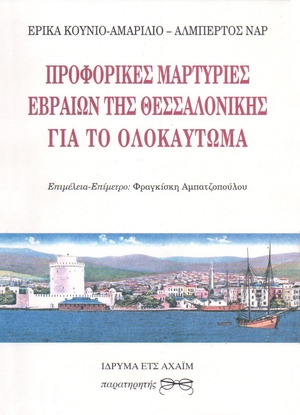 There are 51 interviews in the book (26 women, 25 men). Except for two, the rest have been in Auschwitz–Birkenau. Now, here is the interesting part: 39 out of these 51 never mention gas chambers. Not once. On the other hand, almost all of them know about the crematories (45 out of 51). This is quite unexpected. But let’s ignore this for now and see what the survivors have to say.

As we know, upon arrival at the camp, there was a selection, and many would go on their separate ways. The survivors describe in detail the numerous hardships they have suffered, and how they lost their relatives. But how do they know this? When we look for an answer, we realize that they did not actually see them die. One witness puts it this way:

“We learned it at the camp from the blockälteste, who told us to look after ourselves, because our people are no longer alive.” (p. 92)

“We have not yet learned anything about our parents. We could see smoke rising from afar and were wondering what it is. Until a prisoner, Slovak or Polish, in broken French, told us: ’What are you waiting for? There are your mothers. They have burned them. There are no more.’ That’s how we learned about the great tragedy. At first we did not believe her. We thought she was crazy. But later we learned it for real!” (p. 118)

“We found out when we entered the camp. They were other older Greek women, who came before us. […] They told us that they are burning them in the crematoria. […] Since they who had been in the camp a long time were telling us this, of course I believed it.” (p. 176)

“After we went there, we were asking the Polish who were political prisoners, what is it that’s burning? For 5-10 days they were telling us it’s rye bread they are making, and then they told us it’s our families.” (p. 242)

“At first I did not believe it. ’Impossible’, I said. ’We are being duped’. But when after a week we heard other prisoners confirming it, most of them long-term inmates, French, Polish, Jews from Russia, we believed it.” (p. 289)

“We were seeing the ovens and they told us that they went to the ovens. The other prisoners told us this.” (p. 271)

And on and on. Those of us who have served in the military know very well what kind of a rumor factory a camp can be. All sorts of things are spread from one person to the next. Nobody questions what he hears, and usually he asks someone else for confirmation who is just as clueless. Needless to say, the misinformation problem was much worse in a concentration camp with the crematories next door, in the middle of a war. And the prisoners had no way of knowing the truth.

Now, what is most interesting is that there are two women who actually saw their fathers after they had been told that they were dead. The first talked with him for a while and later received a note from him before eventually losing all contact (p. 27). The second found out that her father was at Buna and perished during the retreat (p. 143).

So, most of the survivors are not lying. They fell victim to the rumors that were rampant at the camps. Here is another well-known rumor:

“Then they gave us a little soap and told us it’s from the ashes of our parents. We did not even touch those soaps.” (p. 29)

Then, we have the selections. Selections were going on all the time at the camp. The prisoners went through numerous ones, and of course they were certain that these were life-or-death situations:

“Indeed, we knew very well then that whomever they picked not for work, he was to be burned; we had understood this well. Not only had we understood it, but it was deep in our minds that whoever was not for work was for burning.” (p. 27)

And yet in the same book we read about some prisoners who got seriously sick at the camp, but they did not “burn”. For example, one woman says:

“I contracted typhus at Birkenau. The Germans came every day to take for the oven. I wasn’t the only one at the hospital. There were others...” (p. 55)

Despite that, nobody sent her to the furnace. Instead, she was later sent to Auschwitz where she spent another two months in bed. She was eventually transferred to Bergen-Belsen.

Another woman suffered from scabies. She was treated at the Auschwitz hospital and recovered. And yet she seems to believe that:

Finally, a prisoner was accidentally shot in the leg by an SS man. But no gas for him. He was sent to the hospital, where they removed the bullet. He also had an operation for a hernia in his stomach. He stayed four months at the hospital (p. 392). Quite a lot of trouble the Germans went through for one man, right? But the prisoners were so convinced that their lives were constantly in danger that they misinterpreted everything:

“If the German took your card with him, tomorrow morning you were going to burn. They were saying that they will send you to a better camp to recover some of your strength. They did this once to fool us. A transport that left for the crematorium, came back after a month.” (p. 329)

So, it was all just an evil German trick! But the prisoners were too smart for that. Still, sometimes they realized they were wrong. A prisoner went voluntarily through a selection in order to be transferred to Germany. He thought that those who were left behind were going to be killed. But:

“The rest were not murdered then. Some of course died later. But some were liberated six months before me. It wasn’t a selection for the crematoria, as we thought. They wanted only the strongest to be sent to Germany, while they kept the weakest at the camp. But who knew this back then?” (p. 260)

Indeed. And this is why we should never jump to conclusions.

In the Preface, one of the editors writes:

“It was the year of 1989. Suddenly within a week two ’hostages’ had died, and the number of survivors from the Auschwitz and Birkenau camps was shrinking fast. At the same time, I was reading and hearing more and more about disputes on the number of the victims of the genocide of the Jews, and even on the events themselves. It became an obsession to me that I had to, as they were still alive, write down their testimonies. Nobody had ’talked’ by then; nobody wanted to open the ’box’ of his most terrible memories, which he had buried so deeply. And yet, while there are still those few survivors, others dare to dispute the undeniable facts of those times.” (p. 7)

So, the editors’ goal was to preserve the memories of the survivors in order to combat the growing doubt about the “undeniable facts.” They should be thanked for their efforts, of course, but despite what they believe, a critical reading reveals that these testimonies poke quite a few holes in the official version of events. The survivors suffered a lot, but when it comes to planned mass extermination, not only are there many inconsistencies, but even the infamous gas chambers very rarely appear. In time, this work might prove to be another nail in the coffin of the official storyline.

If the editors hadn't passed away, the only way to show our gratitude would be by wishing that they would not be around to see it.