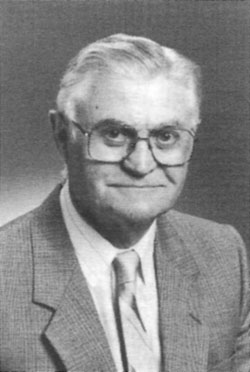 Prophecy is risky. But today [March 9] I prophesy that the Steven Spielberg movie "Schindler's List" will run away with the Academy Awards. I make that forecast without having seen it and without having any intention of doing so, since it must be the 555th movie or TV program on the "holocaust."

Fifty years after the war one tires of hate literature in the form of films. British Columbia schoolchildren are being trooped in to see this effort. In the name of piety, of course. But wasn't it Elie Wiesel, a major holocaust propagandist, who said the world should never stop hating the Germans? Such indoctrination goes on even though Germans born after 1925 or so are no more responsible for the Hitler period than are the Eskimos.

Why we are getting such an overdoes of a bad thing? One reason is that it is profitable in more ways than one. Billions of dollars are still being paid out in compensation to Israel and "survivors," of whom there seem to be an endless number – paid out by those same Germans who were not responsible for Hitler. Anyway, "Swindler's List" will hit the Academy bell because Hollywood is Hollywood and what happened to the Jews during the Second World War is not only the longest lasting but also the most effective propaganda exercise ever. It is so effective that the mere mention of Auschwitz makes even babes feel guilty. Dr. Goebbels himself couldn't have done any better. And didn't. From his seat in hell he must be envious.

Hardly a day goes by but that press, radio and television don't mention something about the six million. The figure is nonsense, but media folk go on parroting what everyone "knows." I used to do the same. That's the safe way, too, for as a recent [Dec. 1993] article in Vanity Fair magazine put it, if you question the official version you can expect trouble. But that's an understatement. You will be damned as "anti-Semitic," racist and even Nazi. After half a century of this the moguls of the movie world reckoned the time was right to cash in a big way. And Spielberg reckoned it was time for him to cash in too.

Doug Collins, a native of the United Kingdom, served with the British army during the Second World War, and then with the British control commission in postwar occupied Germany. An award-winning journalist, he has worked for several Canadian daily newspapers. His career has also included work in television and radio. He is the author of several books. Collins' presentation at the Tenth IHR Conference was published in the Fall 1991 Journal. The two essays published here are reprinted with permission from his columns in the North Shore News (North Vancouver, British Columbia) of March 9 and March 23.

"Movie of the year! Spielberg takes on the Holocaust!" screamed the cover-page in Newsweek magazine [Dec. 20]. You would have thought the war had just ended and that the film was the biggest event smce the Battle of Britain. Critics have fawned on it, especially in the US, where many of them work for Jewish-owned media and know how to adjust their safety belts. Others simply reflect what they have been programmed to reflect. Only one critic has described Spielberg's effort as three hours of propaganda. He was with the Jewishowned New York Times. Good for him. And them.

The exception that proves the rule.

In time of war, propaganda is justified. Fifty years on, it's a bit much. But it comes about because the Jewish influence is the most powerful in Hollywood. One is not supposed to say that, of course. It's the ultimate in political incorrectness. But would it be out of order to say such a thing if the Catholics ran Hollywood and we got a stream of Catholic propaganda? I don't think so.

There have been many holocausts but most of them had hardly warranted a paragraph, let alone movies. Has anyone ever made a film about the two million Armenians killed by the Turks? Or the slaughter of 500,000 Indonesians? How about the uprooting of ten million Germans from their homes in East Prussia and Silesia, the murdering of tens of thousands of them by the Red Army and the raping of their women, young and old? In August 1945, Winston Churchill warned that terrible things were happening. I myself watched masses of desperate refugees steaming into the British Zone of Occupation. (And yes, I know what the Germans did to the Russians.) The Japanese were also skilled in the killing game. Didn't they murder countless Chinese? And Brits and Aussies remember how prisoners were worked and starved to death. And beheaded. But there has been only one movie on the miseries of life and death in South East Asia – "Bridge on the River Kwai." Certainly, there has been no constant propaganda barrage. So now it's all licky-licky for the Japanese. But not for the Germans.

Am I suggesting that Hitler wasn't Hitler or that hundreds of thousands of Jews didn't die in the camps and elsewhere, as did many non-Jews? No. But propaganda is selective and Hollywood propaganda is the most selective of all. So I won't be watching the Academy Awards. Let me know if my little prediction is wrong.

Regular readers may remember that I did a column recently on the movie "Schindler's List," in which I hewed to the view that I was tired of holocaust propaganda. I called it Swindler's List, since even the wife of the dead hero has said that he was a scoundrel. But right away, the Canadian Jewish Congress was on its feet calling for blood. My blood. In Toronto, the CJC's Bernie Farber said I had "clearly crossed the bounds of decency." Well, I'm damned. Nearer home, Michael Elterman of the Pacific Region of the CJC said the Congress was "pondering legal action."

One mustn't criticize their favorite movie, you see. Still less must you question the six million story. Not that mine was a movie criticism per se. As I pointed out, I had no intention of seeing it. What I was criticizing was Hollywood's ever-flowing stream, this being about the 555th film on the same topic.

So I fear I am now listed as an anti-Semite, a description designed to put the evil eye on critics and shut them up. I am in distinguished company. President George Bush was an anti-Semite when he failed to deliver a $10 billion loan to Israel quickly enough. (Israeli cabinet minister calls Bush liar, anti-Semite – news story of Sept. 16, 1991.)

Presidential candidate Pat Buchanan came in for it, too, when he referred to the American capital as "Israeli-occupied territory." And he is another "holocaust denier." Columnist Joseph Sobran is also a villain. His stuff goes to 70 US newspapers, and he has dared to say that there is NO particular "holocaust." This had been a century of holocausts. "We are kidding ourselves," he wrote, "if we talk as it there was anything unique about what the Nazis did." And Sobran has a definition of anti-Semitism that is different from Elterman's. He says an anti-Semite used to be someone who hated Jews. Now it is anyone who is hated BY Jews.

Let me stress that there are plenty of Jews who might be considered to be "anti-Semites" in that they don't wholly hew to the party line. How about Rabbi Eli Hecht, who reviewed the film for the Los Angeles Times? His article [Jan. 2] was headed, "When will Jews let it rest?"

Michael N. Dobkowski is a professor of religious studies and has had this to say [quoted in the Jan.-Feb. 1993 Journal, p. 11], long before the film was made:

Too many books are written on the Holocaust. There are too many films and television plays that exploit the subject... There may be, in fact, "no business like Shoah [holocaust] business." ... The popularization and commercialization of the Holocaust is not only unhistorical but anti-historical.

Frank Rich, movie critic for the New York Times, and a Jew, accepts the six million story but wasn't too keen on the Spielberg movie. He mentioned [New York Times, Jan 2] the "pseudo-documentary camera work" and said that "'Schindler's List' is the (Jewish) culture's new Messiah: the antidote to the terrifying 1993 Roper Organization poll in which 22 percent of the American public expressed doubt that the Nazi extermination of the Jews actually happened." In this case "antidote" is another word for propaganda.

The propaganda is relentless, and includes the "Holocaust Museum" in Washington. And what did other Jews have to say about that? Writing in The Washington Post [April 18, 1993] when the Museum was opened, Melvin J. Bukiet stated:

It's not Jewish tragedy that's remembered on the Mall this week; it's Jewish power to which homage is paid.

Quite. For the Jews who died in the camps and were persecuted in Europe were not Americans. They were foreigners. By that measure, there should be about ten "Holocaust museums" in the American capital.

In today's press, the power referred to by Bukiet is reflected in the silence of the media lambs and the lambs of academe. You have to look to relatively small publications for much of the countervailing material. Consider the comment by associate professor Daniel Vining in the highbrow US magazine Chronicles [Sept. 1993] on the situation in the universities:

Six million is a number like any other number; you would expect to find an exhaustive analysis of it in the statistical and demographical literatures, but you don't. The reason is that it is a taboo subject... If you try to find out about the number, your colleagues will shun you. Worse, you might lose your job.

I wish the CJC good luck with its pondering. As you can see, I do a lot of pondering, too. But no pandering.

Incidentally, didn't I predict that "Schindler's List" would sweep the Academy Awards? And didn't I tell you why? Take a bow, Doug.

"There is always hope when people are forced to listen to both sides."
—John Stuart Mill