Tales of the Politically Correct: "Belsen was a Gas" flap

Hardly a day goes by without someone apologizing for something they said or did or someone else demanding that someone issue such an apology. Political correctness has been stepped up to a McCarthy-like level with the "guilty" parties finding themselves ostracized, boycotted, persecuted, and in some once-democratic countries of Europe, even imprisoned. In this brave new world where most have sacrificed their freedom of speech on the altar of political correctness we find that even discourse on many issues is a thing of the past. What is perhaps most frightening about this political shift and the frequency of such witch-hunts is the alarming rate at which we have witnessed our freedoms erode.

One minor example of such political correctness hit the news this September when Bell Canada, Canada’s largest phone company had to apologize for their latest billboard advertisement. In an apparent attempt to appeal to today’s youth, Bell Canada ran a billboard with a young woman dressed in punk-rock attire. Bell Canada missed the minor detail that one of the buttons worn by this young lady read, "Belsen was a Gas." The Bell Canada executives claim that they couldn’t even read the button in the copy that they reviewed and that only when the photo was blown up to billboard size was the phrase evident.

The news media ran with the story relaying Bell’s apology, "we would never depict such an offensive slogan in our advertising." Reuter’s explained that the phrase was from a "controversial" song title by seminal punk rockers, the Sex Pistols. Reuters also felt it necessary to mention that the billboards appeared in Toronto "which has a large Jewish community and many Holocaust survivors." 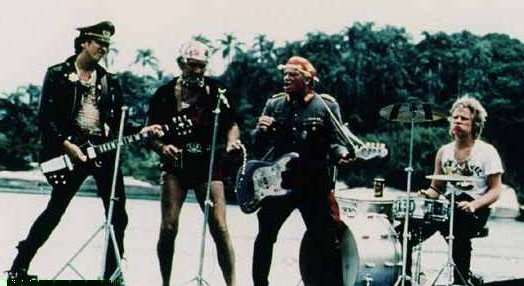 To better understand the silliness of this latest apology one needs a little background. The Sex Pistols were certainly a very controversial band when they broke onto the scene back in 1975. From their first single, "Anarchy in the UK" in which lead vocalist, Johnny Rotten shouted, "I am an Anti-Christ" to their banned single, "God Save the Queen," the Pistols were frequently in the news for shocking British society. The Pistols were banned from performing in the UK and were well known for letting the "f-word" fly on national television. For all the controversy, few will even recall, "Belsen was a Gas," a song which despite what Reuters claims was not truly controversial and received little media attention.

"Belsen was a Gas" which refers to the Nazi concentration camp Bergen-Belsen was the final song written by the band in its near-original formation. This song was supposedly strongly influenced by bassist Sid Vicious who would die of a heroin overdose following the band’s breakup. Throughout the years, the Pistols toyed with Nazi imagery, not as a political statement (they certainly never accepted nor advocated any National Socialist principles), but rather for its shock value. Both lead singer Johnny Rotten and bassist Sid Vicious were frequently photographed wearing t-shirts bedecked with swastikas. "Belsen" was written during the Pistols 1978 USA tour and was not released onto vinyl until the band was formally split. Two versions of the song appeared on the posthumous album, "The Great Rock ‘n’ Roll Swindle." Always looking for ways to create controversy, the reformed Sex Pistols (minus Rotten and Vicious) needed a new lead singer and a new bassist. They found a lead singer by making a run to Brazil and finding train robber Ronald Biggs who was enjoying life from his illegally gained monies. The Pistols would release a some-what cheesy shocker known as "Cosh the Driver / No One is Innocent" which boasted the lyrics, "God save Martin Bormann and Nazis on the run, they wasn’t being wicked God, it was their idea of fun." What did shock British society this time was the record’s cover shot which not only showed Biggs on vocals but made the assertion that Martin Bormann was the new bassist. The photo showed an elderly man in full Nazi uniform playing bass (it of course was not Martin Bormann.)

It was around this time that the song "Belsen was a Gas" was released. Hardly a pro-Nazi song, the rather simplistic lyrics begin, "Belsen was a Gas I heard the other day, in the open graves where the Jews all lay." The song ends with the repetition of the words, "Be a man, kill someone, kill yourself, be a man." Here the sentiment was clearly anti-Nazi and critical of those who were responsible for mass killing. Such thinking was largely consistent with the punk rock movement, which focused generally on hyper-individualism and less-often on true politics. When the punk bands did write political songs, they were generally supportive of the far-left. (This excludes the "Rock against Communism" movement and singer / song-writers such as Ian Stewart, which although they adopted the musical style of the punk movement, generally found themselves left out of even this fringe style.)

The Sex Pistols always intended to offend. In fact, punk rock and punk attitude intended to do exactly that. It was anti-government, anti-older generation, and anti-establishment in general. Today, as mega-corporations attempt to reap financial gain by using this very movement, which stood opposed to them, it is humorous to see them get their fingers burned. If Bell Canada were really as "cool" as the young punker they depicted in their ad, they would have told the media to "piss off." But, they did not understand what they were playing with, not culturally, and of course not historically.