After his capture on March 11, 1946 by British occupation troops, Rudolf Höss stayed alive for 401 days and nights, largely on the strength of the (in)credible stories he supplied concerning genocide conducted at the Auschwitz concentration camp during his tours as commandant of the camp. History contains many precedents for every element of Höss’s dolorous fate from the time of his capture. For example, in 2010, I reported remarkable similarities between Höss’s case and that of Henry Wirz, former commandant of the Confederate POW camp at Andersonville Station, Georgia, whose execution in 1865 by the US Army was the only execution of a war criminal to follow the US War between the States.

The framing story of A Thousand and One Arabian Nights itself may or may not be truly historical, but the story itself, even many of the stories within the story, have been so celebrated, so studied, translated, published, perhaps even in some cases believed, that the entire subject has very truly attained historical stature quite equal to many accounts of actual historical events and exceeding that of many, many more. Briefly, of course, there was in antiquity a king of Persia whose wife had been unfaithful to him and after he had her executed, he remarried and had his new bride executed on the day after their wedding night so as to eliminate the possibility of her being unfaithful to him. The king repeated this gruesome practice many times, never allowing his successive wives to survive for more than 24 hours after their weddings, until Scheherazade submitted herself as a bride with a secret plan to stop the carnage of innocent women. 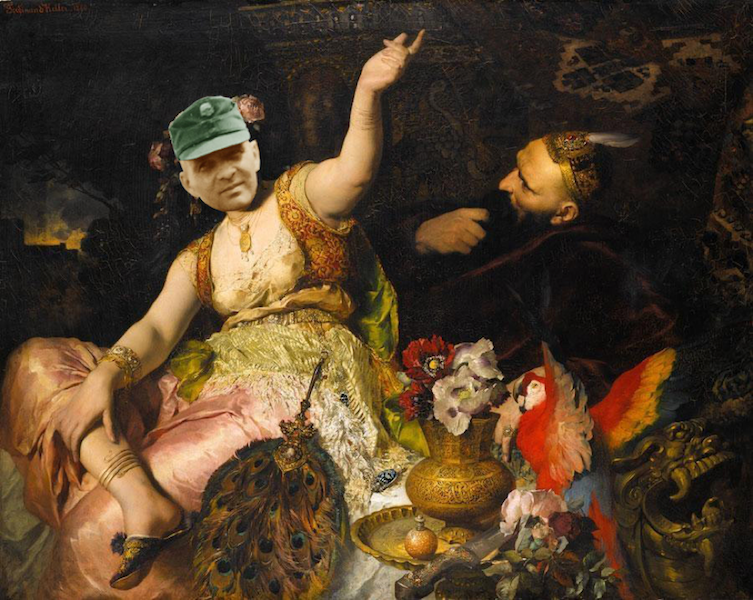 The king duly married her, with his plan to continue his well-known practice very much in mind. But Scheherazade told her murderous husband the beginning of a story on their wedding night that so fascinated the king that he allowed her to survive until the next night so that he could hear the end of the story. It is not stated whether the king, or anyone else, actually believed the story(ies), which include such chestnuts as “Aladdin and the Magic Lamp,” “The Flying Carpet” and other charming fantasies. Scheherazade, who has gone down in (cultural) history as the consummate storyteller, finished her first story on that second night, but before turning out the lamps, she started a second story, which again captivated the king. Thus our raconteuse continued through the succeeding thousand nights, the while bearing her auditor three sons, after which the king finally abandoned his lethal plans and allowed the mother of his sons to remain alive as his queen for the rest of her natural life.

Although Rudolf Höss’s real-life (and -death) story of 1946-47 was true, the stories he told were much more like Scheherazade’s—that is, contrived so as to prolong his life. How could they not have been? At first, it is incontrovertibly known, he was tortured, and he made up stories such as the ones his torturers wished to hear so as to stop the insufferable pain he was subjected to. Then, besides the relief from the pain, his tormentors improved the circumstances of his day-to-day (the days as captive of your malefactors can be so long). Höss began, as only an idiot could fail to do, to see the way to a bearable future, however short or long it might ensue to being: tell stories—wondrous stories, impossible stories, anything to delight and fulfill the vengeful men who controlled the air you breathed, the food you ate, the cold you suffered, the light you saw. One wonders whether the precedent of Scheherazade, surely known to Höss, might have occurred to him. Either way, the path to survival, at least to tomorrow, lay down the path of incredible, horrific stories and signing the affidavits that made them documented truth, at least for the gullible, the vindictive, and those who, ultimately, had further uses for the “information,” including those who would found a new state upon it—a state today secretly numbered among those capable of raining thermonuclear destruction upon the innocent billions who live within a certain distance from the seas traversed by their submarines.

Höss had, and knew he had, far more at stake than his own flayed and bleeding skin. His arrest itself had been enabled by the capture and incarceration of his wife and three children; these remained pawns in the control of the occupying victors to do with as might best serve to elicit the desired testimony from the trembling, fear- and pain-wracked shell of a man who knew not what awaited him or his beloved family by the next dawn. That he retained the use of his formidable powers of imagination and creativity is at today’s remove an object of deserved wonderment. And he rewarded his “king” bounteously, with lurid and detailed accounts of the slaughter of millions of his hapless charges in the hell-pit of Auschwitz that he had erected and operated with hideous efficiency at the behest of Heinrich Himmler, the Reichsführer-SS himself. Scheherazade has been toppled from her perch enjoyed until then as the world’s most-creative, if not most-desperate spinner of tall tales to preserve her very life.

But Scheherazade’s tales inhabit the domain of fairy tales—no one believes in flying carpets, nor are there any laws providing prison terms for anyone announcing that they decline to believe in such things.

Rudolf Höss’s desperate flights of fancy, however, inhabit a very different domain. Upon the strength, largely, of the sworn testimony of Obersturmführer Höss, a legend has arisen to challenge such as the Immaculate Conception of Christ, the Parting of the Red Sea, even the bearing of the entire earth upon the mighty shoulders of Atlas. And this body of legend has teeth: since 1952, Germany has paid over $89 billion to victims of the Holocaust. Israel continually invokes this Holocaust, attested to by Rudolf Höss and many others under similar duress and, like Höss, subsequently executed for their troubles, in expiation of the atrocities Israel visits upon the luckless inhabitants of Palestine in the Jewish state’s relentless drive to conquer Lebensraum in the Holy Land for the Jews of today and tomorrow.

The fruits of Rudolf Höss’s last 401 nights are fully detailed in Carlo Mattogno’s 2017 Commandant of Auschwitz—Rudolf Höss, His Torture and His Forced Confessions, though Mattogno concludes that Höss, rotting in a prison cell and in fear for his wife and three children, is more motivated by gratification in being the center of much attention than by anything that might be called a Scheherazade Syndrome. Perhaps the two aren’t entirely different in the first place. But I think the Scheherazade Syndrome might, for such situations, take its place alongside, for example, the Stockholm Syndrome.

Ultimately, as with so many things about that so-called Holocaust with all its testimonies and sworn affidavits, we’ll never know. Rudolf Höss was hanged at Auschwitz on April 16, 1947. We wouldn’t have known even if he hadn’t been hanged.  The Truth is ever-elusive.