When the first Cremonini-Prize was awarded[1], I discussed with Doktorand Germar Rudolf and the Committee suitable nominees for the next Prize. Of course, Deborah Lipstadt[2] was a prime nominee, but there were others such as the Gentile Eberhard Jaeckel[3], the Jewish sect Rabbis Marvin Hier and Michael Berenbaum[4] , and the mentally ill Elie Wiesel[5]. The difficulty, of course, was to select the most suitable nominee for his/her outstanding written work that would conclusively demonstrate that he or she alone merited the Prize over others. Van Pelt’s 570 page, heavily footnoted, well-indexed, broadly sourced, beautifully illustrated and packaged The Case for Auschwitz. Evidence from the Irving Trial [Indiana University Press, 2001] exhibited for the Committee all the necessary requirements for arriving at the final decision. This large book is quite scholarly, well written, possesses many photos and drawings, contains quite detailed interfacing with Revisionist books and articles, while displaying the author’s 1.) extreme prejudices against Revisionists’ and their scientific-historiographical researches, and 2) his extremist commitment in favor of a narrowly focused Jewish/Talmudic/mystical presupposition toward Jewish historiography and the uniqueness of the Jewish slant regarding World War Two and Jewish experiences – both the real and the alleged.

In short, Van Pelt holds the view that “the Jewish Holocaust Story” [= the JHS] is at bottom a religious tenet, along with Rabbi Berenbaum, and he holds the quaint view that Krema II, Leichenkeller I at Birkenau was/is an analogous locus to the Solomonic Temple of the Tenth Century BC and its “Holy of Holies” – where the presence of YHWH-God dwelled and wherein the High Priest representing the entire Israelite Nation could enter only once a year to offer blood sacrifice from a physically perfect lamb slaughtered for that purpose.

At the Dutch University of Leiden, Van Pelt took his State Doctorate in 1984 in the field of the History of Ideas with a dissertation entitled “Tempel van der Wereld de Kosmische Symboliek van de Tempel van Salomo.[6]

His first teaching position was as Visiting Assistant Professor in the School of Architecture at the University of Virginia in Richmond – to which I traveled on May 15th of 2003 and where I inquired of present professors who were there in 1985 for the “famous” or “infamous” departmental meeting that he describes on page 66 of The Case.

While I obtained one name and phone number, the professor refused to offer any comment to me at all about the incident described, which I found strange indeed. Also, the School of Architecture is divided into three departments: 1) Landscape; 2) Structural; and 3) History of Architecture. Van Pelt belonged to the latter and, I would suggest, this one was quite consistent with his doctoral specialty in History of Ideas with an emphasis on selected structures worldwide over the millennia. Of course, such a specialty and such a position would in no way make him “an architect” nor “a professor of architecture” any more than if I taught Ethics at a School of Medicine would make me to be properly titled “a Professor of Medicine.”[7]

On page 66 of The Case he describes briefly his experience with academics who seemingly were callous with regard to Auschwitz and his own “conclusion that interpretations of history that ignore evil were doomed to remain shallow and ultimately meaningless.” Van Pelt continues on the next page: “I did not understand the historiographical pull away from systematic investigations[8] of the presence of evil in history.” And, he castigates historians who can excel in their description of building construction in the past, but who “feel lost when confronted with evil.” He adds: “The gas chambers changed the whole meaning of architecture” and then makes his dogmatic analogy of the Solomonic Temple’s Holy of Holies “and the gas chamber of Auschwitz.” [Interesting to notice the singular “gas chamber” instead of the plural gas chambers that one might expect!]

He tells that in a departmental meeting in a conference room at Virginia to discuss the 750 buildings that students of architectural history were to know in order to pass their comprehensive exam, he was asked if he had any buildings to add to this list of 750. He first proposed the Temple of Solomon and there were no objections. Then he proposed the Tabernacle of Moses and the Tower of Babel [reversing their temporal order, one may observe] and these also were agreed to. 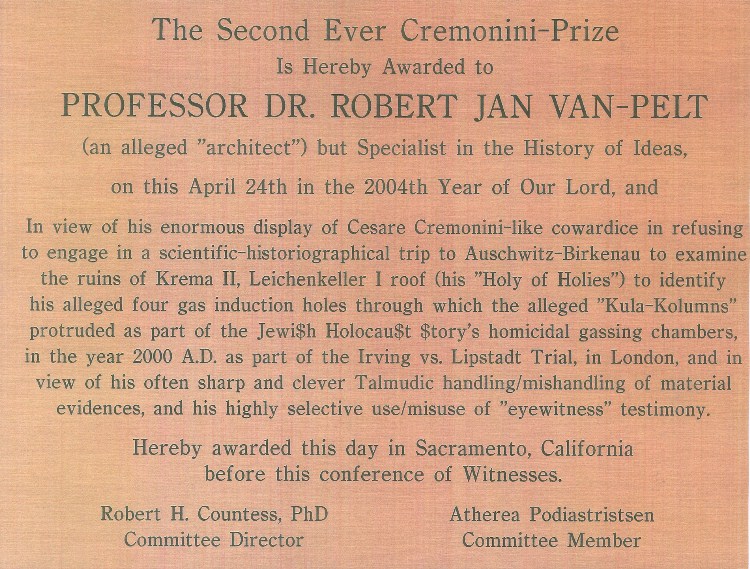 But, finally, he proposed Crematorium 2 at Auschwitz. “A stunned silence followed, broken by one professor’s acid observation that obviously I ought to consider an alternative career.” [One almost expects Van Pelt in his book narrative to label this professor an “anti-Semite.”]

Might the bold professor have been thinking that Van Pelt was rather consistently proposing structures that either no longer exist – Babel, Tabernacle, Temple – or one that had been quite devastated by one or more blasts of explosives? Might this seasoned professor have also been thinking that Van Pelt’s three non-extant structures perhaps were literary only, mythic even, and never had truly existed?

Van Pelt’s preference for non-existent structures that no archaeologist can today investigate, and his insistence upon the reality of “evil” in a modern, Western university where religious skepticism is routine, and his obsession with one Auschwitz crematorium as being “a Holy of Holies” are a large part of the justification for awarding him the Cremonini-Prize. His refusal to travel with David Irving to his “Holy of Holies” and point out the four holes in the roof through which the alleged “Kula-Kolumns” protruded, is another justification for the Prize – Van Pelt is a scholar with significant ability but he is not a man of courage. He was, more so, like Cesare Cremonini who refused to look through Galileo’s telescope into the heavens, with Cremonini being afraid that he might see something that would get him into difficulty with the Church.

Perhaps Cremonini should have considered “an alternative career”!

Although I cannot read Dutch, I did notice on page 359 of Van Pelt’s doctoral dissertation that he managed to work in his obsession with Auschwitz: “Hij bouwde zich in Auschwitz, Bergen-Belsen en de Goelag Archipel een hel op aarde, een ‘Arschloch der Welt.’”

Bizarrely obsessed, Van Pelt writes on page 68 of The Case that Crematorium 2 “was the black hole that refuted the premise that architecture adds to our world.” And then:

“Those 2,500 square feet, in which the Germans produced perhaps as many as 500,000 corpses, was to the modern age what the Parthenon had been to the Greek polis, what the Chartres Cathedral had been to Christendom. As the station of total collapse, it could be the site from which architecture could rise again, a place of renewal ex nihilo.”

I have been to the Parthenon on the Acropolis in Athens and to the more complete reproduction in Nashville’s Centennial Park, and I must say that Van Pelt’s comparison of the Parthenon with its extraordinary beauty and intricate lines and and angles and detailed East and West pediments with huge sculptures to the Birkenau Krema II is more reasonably an indicator of dementia onset.

And this man stands before youthful, pliable students at the University of Waterloo just west from Toronto and, being paid handsomely by Canadian tax Dollars, he seems to be able to succeed year after year articulating his obsession to them. Little wonder that he agreed to meet with me last April 3rd, 2003 when I went to visit Ernst Zündel in his Thorold, Ontario cell, but then refused to return my calls in order to set an exact time and place. I went to the University, found the School of Architecture, a rather modest one at that, and learned that he was not teaching that Semester but only advising students on a part-time basis. This man has no serious depth of courage to engage in serious dialogue with the opposing side. He must have found the cross-examination by Irving in Courtroom 73 of the Royal Courts of Justice in London in February 2000 rather unpleasant. No doubt, he would have relished being elsewhere, anywhere but facing serious questioning.

One might make a comparison and contrast between Professor Arthur Butz’ The Hoax of the Twentieth Century and Van Pelt’s The Case for Auschwitz. In fact, one might even imagine that Van Pelt’s book could have been titled “The Case against Arthur Butz.” Butz’ new TADP edition is 506 pages, while the Van Pelt book is 570 pages. In contrast, Butz’ book was funded privately while the Van Pelt book was funded by the taxpayers of the State of Indiana. Both Butz and Van Pelt, in my opinion, are rather capable writers, with Butz being only a modestly effective speaker. I have not heard Van Pelt lecture, although his short appearance on the Errol Morris film Mr. Death provides a basis for assuming that he is rather modest, if not boring, as a lecturer.

But, Butz has going for him that which Van Pelt can never dream to have – thorough preparation in the natural sciences, particularly engineering and mathematics, with the ability to branch out into historiography and weigh evidences in physics, chemistry, ground water problems, building construction, architecture, and propaganda. By contrast, Van Pelt is a mystic, severely handicapped by his narrowly sectarian Jewish-Talmudic kosher frame of reference on life present and past.

Butz studied and researched against the tide of public opinion, investing his own funds in his book, and he faced enormous Jewish pressures placed upon his University’s Board of Trustees to dismiss him on account of the book. By contrast, Van Pelt was lavishly supported by the Lipstadt “mafia,” if I may put it that way, and given several hundred thousand Dollars to buy his report, much of which became his book, then enjoying Jewish media and book distribution outlets and advertising promotions to make it successful, though not a bestseller by any means. Butz continues to be smeared and cursed by the Establishment crowd, while Van Pelt is praised and honored and given time off to write more books.

The biggest contrast of all, however, is that Arthur Butz was committed to Robert Faurisson’s principle of Exactitude. Van Pelt remains a religious fanatic, a hack insofar as Exactitude is concerned, willing to twist or ignore or calumniate where necessary so long as he maintains his dogma that “No holes? No Holocaust!” is anti-Semitic and that Holocaust Revisionists are evil and that open debate on the Holocaust on the same platform with the hated Revisionists is dangerous and unnecessary.

In summation, true Revisionists are willing to set forth their positions and then let the adversarial scholars “shoot at them” in the Marketplace of Ideas, and then “go back to the drawing board” and make further revisions as the data and logic require. But Holocaust dogmatists like Robert Jan van Pelt have no courage to meet scholarly dissenters in the Marketplace of Ideas. The Van Pelts prefer to enrich themselves off “the Holocaust Industry” and sit comfortably in academic departments where students are too ignorant and nescient to ask the tough questions about The Case for Auschwitz, in part because academic departments insure that the Professor Arthur Butz types are restricted to Engineering and Computer Science Departments.

The 2004 Cremonini-Prize is, therefore, most appropriately now bestowed on a man who richly deserves it.