The 50th Anniversary of the Liberation of the Camps 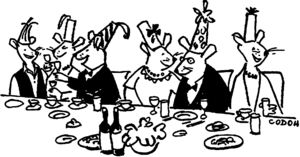 I had hoped, I had planned, to help celebrate these momentous days and weeks of the 50th anniversary of the liberation of the German concentration camps by the Allied armies at the close of WW II. We fully expected to have, and are very close to having but still do not have, an instrument of unusual clarity, simplicity and force with which to join in the great celebration that has been taking place. It was our secret weapon, but it was not to be. One small and not-so-small frustration after another. The best laid plans of mice and men...

Looking for a way to put the best light on it, I have worked out a nice theory that says it's all right, that says maybe it’s even for the best, that I leave the celebration to those who have the funds, the access to media, and the support of the intellectual elites. Maybe it's for the best that I am unable, at this particular moment in time, to go head to head with The LOBBY.

It may be a very good idea indeed for me to expend no resources at the moment The Lobby is investing millions, expend no effort to obtain media attention when The Lobby itself has got the full attention of all important media, to enter a contest where at this moment in time it would cost me everything I have to play the game but at the same time would be impossible for me to win it. Looking at it that way, it might even be a little stupid for me to try it. I'm the guerilla in this contest, an irregular. I don't command vast resources. It's not my place to square off, for ideological reasons, with The Lobby in a huge contest where it is certain I will be overwhelmed.

We’re winning the war, but we're going to lose this particular media battle by default. The Lobby is staging a triumphant media show that may last another 90 days, but when it starts to run down, I'll be there with our secret weapon which I mentioned in SR 19 and said I would be able to reveal now but which is going to have to remain under wraps for a short while longer.

The Lobby occupies the cities, the primary media, and has the attention of the intellectual elites while we're out in the countryside, swimming amongst the people like successful guerrillas do everywhere, distributing to the masses the Good News, which is rooted in intellectual freedom and an openness to the truth no matter how or where the chips might fall.

One day shortly The Lobby "liberation-of-the-camps" campaign will have spent itself, the people will have gotten tired of listening to its propaganda and suffering through its stultifying suppression of open debate, and that will be the moment. Every dog has its day. These days the Holocaust hounds are in lull cry. Let 'em run themselves into the ground. We'll pick our own time, our own place, our own weapons.