The Anti-Defamation League is anything but lazy. Every month or so they come up with some new campaign to show that they are on the side of the oppressed, the insulted, the injured. Of course, when the ADL was first formed in 1913, after the Triangle Shirtwaist Fire and lynching of Leo Frank, there was need for a watchdog organization for Jews in America. Today, however, like the other ethnic cohorts, the Jews have done pretty well for themselves in the USA and are fairly well assimilated. So new categories of oppression have to be found.

The most relentless campaign calls itself "A World of Difference" and features cute photos of kids who appear to be African, Asian, Native American, you name it. All of this, as far as it goes, is just fine. Let's all love each other and sit in a circle and eat jellybeans. But if you stop to think about the ADL's other activities, one starts to suspect that the ADL's tolerance of difference is only skin deep.

One wonders what kind of "world of difference" the ADL would endorse if each of the racial or ethnic groups pictured had attitudes and opinions—in other words, meaningful differences—that conflicted with ADL interference in everything from comic books to children's television. Would they celebrate "difference" then?

One wonders. The ADL has played a major role in the suppression of opinions they don't like—witness their role in the campaign against the publication of A Nation on Trial [ed. by Norman Finkelstein] and several other books. Witness their frequent assaults on Holocaust revisionism, witness also their attempts to sell software that effectively censors revisionist sites, as well as their even more frequent identification of "haters" as anyone who disagrees with their received opinions. 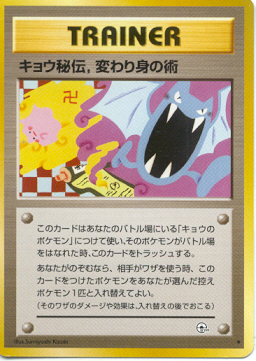 The ADL was outraged by this children's Pokemon card. Note the red swastika over the yellow background near the top-left of the picture.

In fact, as we go to press, the ADL has now taken on Pokemon: the cute animal "pocket monsters" of cards, TV, and film. It seems that someone imported trading cards meant for Asian consumption emblazoned with swastikas: a sacred symbol of hope in the Shinto and Buddhist religions. The ADL issued a press release, asking Nintendo to "talk to" the creators of the cards.

At times like this one can only shake one's head at the arrogance of those who two-facedly harp about "diversity" —the swastika is thousands of years old, arguably older than the mogen david, and it is a sacred symbol to at least two prominent world religions. The ADL's conduct here comes ever so close to crossing the line of outright religious bigotry.

Certainly, we should recognize attempts to conjure the imagery of Nazi Germany: it would fool no one if a group of neo-Nazis suddenly converted to Shintoism so they could conduct a march through Skokie, Illinois bearing "politically correct" swastikas. But what's at issue here is the need, not to reflexively reject this ancient and venerable symbol, but to educate people about the difference—as in "a world of difference."

The ADL is an important organization; it's an important part of our cultural mix, especially for Jewish Americans. But the ADL's celebration of difference rings a little hollow when one sees how they will use their voice to stifle the only kinds of difference that really matters.