The Adventure of Revisionism

With rare exceptions, a Revisionist researcher is not an intellectual closeted in his study. Even if he were to choose a hermit's life, society would soon see to the end of his isolation.

To begin with, a Revisionist must be willing to travel wherever his research requires, and to carry out investigations on the spot. And because he'll receive no help from the authorities – on the contrary – the Revisionist must learn to outwit his adversaries and overcome a hundred obstacles to achieve his goals. Life itself becomes his teacher. 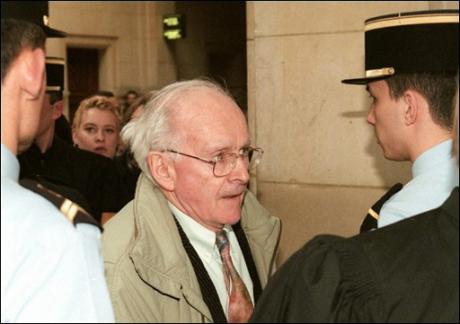 Prof. Dr. Robert Faurisson dragged in front of a French court for his peaceful, dissenting views on the Holocaust.

He must establish and cultivate contacts with fellow Revisionists around the globe, for no researcher can isolate himself from the work of others. Speaking for myself, Revisionism has brought me to many lands, in particular the United States of America, Canada and Germany, as well as Britain, the Netherlands, Belgium, Norway, Sweden, Austria, Switzerland, Spain, Italy, Poland, and a few other countries. (Historical Revisionism is also growing in Australia, New Zealand, Ukraine, Japan, Tunisia, South Africa, Iran and Peru.)

In cultivating these contacts, one discovers the ways that different mentalities – Anglo-Saxon, Germanic, Latin, Arab, Jewish, Catholic, Protestant, Muslim and atheist – confront one of the mightiest taboos in history: the Jewish "Holocaust." Revisionism, which lays bare the taboo, thus uncovers differences in outlook as well.

It reveals, too, what individuals are made of and how institutions actually function. I like to watch the face of a man or a woman, an oldster or a teenager, as he or she trembles upon hearing, for the first time, the sacrilegious words of a Revisionist. With some, the face colors and the eyes light up: curiosity is aroused. Others pale; the person who believed in his own tolerance discovers his bigotry, and the one who had easily opened his heart quickly slams it shut.

Confronted by Revisionism, institutions likewise show themselves for what they are: products of circumstantial arrangements on which time has conferred an aura of respectability. The judiciary, for instance, claims to defend justice (a virtue!) or to uphold the law (a necessity), and would have us believe that, as a group, judges care for truth. But, when a judge finds himself obliged to try a Revisionist, how odd to watch as he jettisons the scruples he and his colleagues claim to honor! When faced with a Revisionist, there exists for a judge neither faith, nor law, nor right. In confronting Revisionism, the judiciary shows just how rickety it is.

As for the petty little world of journalism, the media demonstrates how it, more than anyone, is careful to traffic only in authorized ideas and wares; while at the same time it fosters, through its antics, the illusion of a free circulation of ideas and opinions – not unlike jesters in a tyrant's court.

The Revisionist lives dangerously. Police, judges and journalists lurk in wait for him. He may end up in prison – or the hospital. He risks economic ruin for himself and his family. Little of that matters to him. He lives, he dreams, he imagines. He feels that he is free. It's not that he cherishes illusions about the impact of his findings. These frighten everyone; they are too much in contradiction to accepted knowledge. These findings strike at two great human mysteries: the general mystery of fear, and the specific mystery of the need for belief, belief in something, no matter what.

One historian, after finishing a five-volume History of Mankind, was once asked: "After all is said and done, what is the chief motivation of human history?" After a long hesitation, he replied: "Fear." There is no question that fear is an overwhelming factor, and that it assumes in man, more than in beast, the most striking, and sometimes the most ludicrous, forms, no less than the most deceptive disguises. In most men, but certainly not in all, the mystery of fear combines with another mystery: that is, as already indicated, the need, the desire, or the will to believe for the sake of believing. For this there is a saying in English that we lack in French: "the will to believe." Celine said: "The fury to lie and to believe spreads like the itch." ("La rage de mentir et de croire s'attrape comme la gale.") Before him, La Fontaine noted: "Man is frozen to truths. He is on fire for lies." ("L'homme est de glace aux verites. Il est de feu pour les mensonges.")

Revisionism can correct history, but it will correct nothing of human nature. On the other hand, the future will prove the Revisionists, as writers of history, were right. There is already too much evidence to show that the progress of Revisionism is inexorable. Revisionism is destined for a place in history as "the great intellectual adventure of the end of the century."