The Basement Showers of Crematorium III

Samuel Crowell is the pen name of an American writer who describes himself as a “moderate revisionist.” At the University of California (Berkeley) he studied philosophy, foreign languages (including German, Polish, Russian, and Hungarian), and history, including Russian, German,and German-Jewish history. He continued his study of history at Columbia University. For six years he worked as a college teacher.

Well before the Second World War ended, the claim that the Nazis lured their victims into gas chambers under the pretense that they were entering showers was widely reported in the press. This linkage of showers and gassing is probably one reason why Allied soldiers, finding naked bodies in the camps, simply assumed that these were gassing victims, although we now know that typhus victims were stripped after death in order to burn the clothing and destroy the typhus-bearing lice.

Nonetheless the linkage of showers and gas chambers enabled Jean-Claude Pressac to argue, in his 1989 book, Auschwitz: Technique and Operation of the Gas Chambers, that an inventory sheet in the transfer documents from the building office to the camp administration which listed “14 shower heads” [Brausen] for one of the basement rooms of crematorium III at Birkenau proved that that crematorium had housed a gas chamber. Pressac assumed the shower heads were fake, but, as Robert Faurisson was perhaps the first to note, that was simply presumptuous: the inventory specified “shower heads,” not “fake showers.”

Pressac offered another document regarding showers in crematorium III in Auschwitz. This was a telegram dated May 14, 1943, from Karl Bischoff, the head of the Auschwitz Central Construction Office, to Kurt Prüfer, the head engineer for Topf & Sons, which built the crematorium ovens and sought to provide other products to the camp as well. It reads:

Bring Monday [May 17] rough plan for production of hot water for about 100 showers. Fitting of heating coils or boiler in the waste incinerator at present under construction crem. III or system using the high temperatures of the flue gases. It would be possible to raise the brickwork of the furnace to take a large tank. Herr Prüfer is requested to bring the relevant drawings on Monday 15/5. Sig. Bischoff

The standard explanation of this document has been that the SS planned to install showers after they ha completed their program of gassing and burning their enemies. As Carlo Mattogno has argued, however, this does not very well explain why the telegram is marked “Urgent” (dringend).

Pressac’s commentary on this document is worth quoting:

“In this telegram, Jährling requested the urgent study of an installation to obtain hot water from the waste incinerator of Krematorium III, then under construction, to supply about one hundred showers (probably to be located in an annex building built on the southern wall of the Krematorium). Prüfer was supposed to bring the relevant drawings with him on the 17th of May. [This plan was never implemented, although such installations were built in other camps, for example in the crematorium of K L Natzweiler (Struthof) where the incinerator was the main source of heat for the showers.] Although this request for a hot water system for a hundred NORMAL showers was in no way criminal, it was recorded in the Krematorium III worksite 30a, file under the heading “SONDERMASSN [AHMEN] / SPECIAL MEASURES” because the building was connected with these measures, the killing and cremation of Jews unfit for work.” [emphases in original]

This interpretation is incorrect in all respects. The telegram to Topf & Sons is part of a longer report, in four parts, that is contained in the Auschwitz Central Construction Office files, now archived in Moscow.

The report commences with a cover letter from Bischoff to Kammler which begins:

In English: “Special Measure for the Improvement of Hygiene at the POW Camp Auschwitz,” that is, Birkenau.

The text of the letter begins: “Attached hereto is a report on the measures carried out to date for the improvement of the hygienic facilities in the POW camp.”

There follows a two-page report that is headed: “Report on measures completed for the implementation of the special program ordered by the SS-Brigadeführer and Major General of the Waffen-SS, Dr. Ing. Kammler”

The report dates the particular special program to May 12, 1943, and lists seven categories of activity, including work on the sewage treatment plant, cutting the King’s Ditch (Königsgraben, the main drainage ditch at Birkenau) through to the Vistula, work on the lavatories (Abortbaracken), washing barracks, and so on.

The sixth listing is particularly relevant:

For the disinfection of the prisoners’ clothing in the several parts of BA [Bauabschnitt: i.e., Birkenau sector – ed.] II an Organization Todt disinfection station is envisioned. In order to achieve a complete bodily delousing for the prisoners, both of the existing baths for prisoners in BA I will be equipped with hot water heaters and boilers, so that there will be hot water for the existing showers. It is further planned to run heating pipes from the incinerator at crematorium III, to be used for the water in the showers to be set up in one of the basements of crematorium III.

The report is dated May 16, 1943, as is the covering letter. Next, we have a copy of the telegram sent to Prüfer, dated May 14, 1943, supplementing the previous report.

Finally, we have a further three-page report, dated May 13, 1943, which details the job assignments for the “special measures,” now referred to as an “emergency program” (Sofortprogramm). Paragraph 9 reads as follows:

Civilian worker Jährling is to carry out the construction of the hot water heaters and boilers in the washing barracks, as well as the showers in the undressing room of crematorium III. SS-Sturmbannführer Bischoff still needs to talk to the camp commandant, SS-Obersturmbannführer Höss, about the showers. For the delousing ovens the SS-WVHA has still to send an Organization Todt drawing.

Note that Bischoff refers to himself in the third person here: because this letter comes three days before the report of May 16, we feel it is safe to conclude that Bischoff had authorization from Höss by that time. Mattogno has added a few more points to the question whether or not the showers under discussion were fake or genuine, by referring to two more documents strongly suggesting that they were genuine indeed:

On June 5, 1942, Topf sent Drawing D60446 to the Zentralbauleitung “regarding the installation of the boilers in the rubbish incinerator.” This project also involved the installations for crematorium II. In an undated “questionnaire” apparently written in June 1943 regarding the Birkenau crematoriums, in answer to the question “Are the exhaust gases utilized?,” the head of the Zentralbauleitung, Bischoff, responded: “Planned but not carried out,” and in response to the following question: “If yes, to what purpose?,” Bischoff answered, “for bath facilities in crematorium II and III.”[1]

On the basis of the above report, which is put into context thanks to the work of Mattogno, the following conclusions may be drawn: 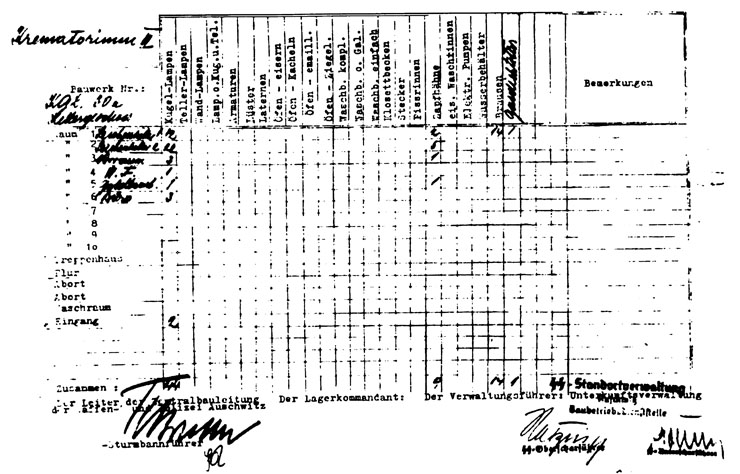 This document (BW 30/43, p. 24, in the files of the Auschwitz State Museum) is alleged by researcher Jean-Claude Pressac to have contained "criminal traces" of homicidal gassing at crematorium III in Auschwitz-Birkenau. It is in fact an inventory of plumbing and electrical fixtures in the crematorium as of June 24, 1943, the date the Auschwitz camp administration took over the crematorium from the camp construction office. The inventory includes fourteen shower heads (14 Brausen), but mentions nothing of the "dummy" shower heads that Pressac alleges it evidences. Surely evil has never been so banal.

In sum, the Bischoff report of May 16, 1943, settles once and for all the question of whether or not the showers in crematorium III were real. It also strongly supports the idea that the crematoriums were equipped with temporary delousing and disinfection facilities in the spring of 1943, which revisionists have argued for years. The revelations in the Bischoff report also clearly contradict the idea that these same basements were used to gas thousands of prisoners or that the crematoriums were built for the purpose of exterminating the camp population.