This book is about the profound subjects of thinking, knowing, understanding, and then acting (or just as often, refraining from acting) on understanding. While it concentrates on how to think, know, and understand, it necessarily, and very valuably, strays occasionally into what to think and know about. Its attainment of bestseller status is, according to the narrative I have constructed, based on its promises in the domain of prediction. But in its contemplations of prediction or, more accurately, preparedness, it (again, necessarily and most valuably) delves into prediction’s mirror-image—understanding the past—in ways that will gladden the heart and enrich the mind of every revisionist who engages in revision as a search for the truth.

From its pages, an analogy of reverse-prediction, that is, understanding of what happened, or how things were (and no longer are) stands out among all the other recollections that ensue from reading this book. And that is the Story (my capitalization) of the Ice Cube.

It posits the presence of a puddle of water, somehow known to the observer to be the runoff from the melting of a piece of ice—perhaps the consequence of a recent period. Gratuitously, I have added to the situation the specifications that what is known encompasses the exact period of time (in the past) that the ice cube melted, and even (from the volume of water observed) the amount of water the (somehow known-to-have-existed) ice cube contained, and even where the ice cube was—an amount of knowledge seldom available in situations of observed moisture. What Taleb irrefutably points out is that even someone possessing all this unlikely knowledge would still remain utterly unable to reconstruct, even approximately, the specific shape of the piece of ice—where it protruded, and how much, and where it had recesses, and how deep these were, and so on and on in an infinitude of impossible specifications. 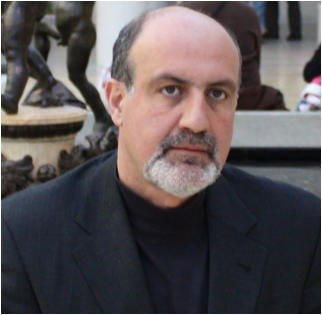 And yet, pundits, seers, experts, and charlatans regularly attain high incomes in our society from propounding just such “information” concerning the factors and causes of recent past events, even while in many cases venturing with varying degrees of assurance predictions as to what the purported present set of circumstances portends for those of us who managed to survive the just-past debacle. Taleb explores such mass—and massive—gullibility somewhat tentatively, likely because Taleb is not a psychologist (nor a pundit, seer, expert, nor charlatan), but rather, a former securities trader who first hit it big in 1987 with contrarian positions that paid off enormously on the 23% swoon of the stock market that occurred in that year. It appears Taleb may again have scored in the 2008 financial crisis, if on no other evidence than that, in this book’s first edition (2007), he very clearly anticipated those developments in telling detail. This review concerns the book’s second edition (2010), which includes a 96-page “Postscript Essay” that to my reckoning embodies something close to half the value of the overall work, at least for revisionists. In it, Taleb dwells but little on past events that he can well claim to have predicted (he sniffs that he is more interested in future events than in past events, but this still leaves over a good deal of useful insight as to the less-favored direction of the arrow of time—the one of primary interest to revisionists).

History, indeed, gains some very special treatment at the hands of this master of time and events, though he directs considerable opprobrium also to the fields of economics, monetary policy, regulation, the social sciences in general, and indeed academia en toto, to which he affixed the indelible label “organized knowledge,” echoing the term “organized religion.” History, and many of the other “narrative disciplines” such as economics and the social sciences, are subject to what he styles the “narrative fallacy,” this being the complementary propensities of consumers (the public) and suppliers (experts) to produce and accept explanations of past and present conditions that: (a) accord well, or even perfectly, with the known conditions of the present; and (b) are but one or another among potentially millions of narratives that could, with equal plausibility, explain those few known results observable in the present day. That the favored narratives might have been selected by, or concocted for, any of numerous predispositions to believe, or persuade, is so irresistible as not even to require mention.

On Page 309 (of the paperback second edition), he reports first under the heading of “My Mistakes” (committed in the first edition):

The first fault was pointed out to me by Jon Elster. I had written that the narrative fallacy pervades historical analyses, since I believed that there was no such thing as a test of a historical statement by forecasting and falsification. Elster explained to me that there are situations in which historical theory can escape the narrative fallacy and be subjected to empirical rejection—areas in which we are discovering documents or archeological sites yielding information capable of countering a certain narrative.

Indeed. Any revisionist might have told him the same thing, and Jon Elster turns out to be a Norwegian social and political theorist who has authored works in the philosophy of social science and rational choice theory. He evidently is not primarily known as any sort of revisionist, though for obvious reasons, I suspect he harbors a specific revisionist notion or two—among which, no doubt, are notions that he finds it best for his career not to announce or admit too noticeably, things being as they are.

Taleb concludes the first section of his “My Mistakes” with the sentence, “Once again, beware of history.” This options-trader-turned-philosopher is showing a good hand indeed in the central issues that engage readers of Inconvenient History. He shows this good hand in many other matters of vital importance, as readers of his book will discover.

But returning to the matter of history, or of the “just what really happened here?” line of inquiry, Taleb adduces one other item that attracted the attention of this revisionist: the existence of one Helenus of Troy. This Helenus’s face most definitely did not launch any ships, as the famed Helen’s was said to have done, as Helenus was the son (not daughter) of King Priam and Queen Hecuba. In his own right, Helenus was a warrior of ability befitting a prince, and of importance, too, as at one point the besieging Greeks captured him, and apparently tortured him for information. But Taleb ascribed to Helenus an ability of positively riveting interest: he was a reverse prophet. That is, according to Taleb, he possessed a gods-given ability to discern and report what happened in the past—in answer, no doubt, to the torrent of questions eternally arising in the minds of people who wonder just how things got to be the way they are.

I have been unable via other (secondary) sources to confirm Taleb’s report of Helenus’s special gift, but apparently it is described in The Iliad, which may in fact be the entire corpus of information about this figure of the ancient past. Taleb enjoys a reputation as a formidable scholar and as a polyglot to boot, being as he is fluent in French, English, Arabic (he is from Lebanon), Italian, and Spanish, and able to read texts in Greek, Latin, Aramaic, Hebrew, and the Canaanite script. No doubt, his information concerning Helenus is derived directly from text rendered in the original ancient Greek, and its absence from Wikipedia articles is a reflection on the “free encyclopedia” rather than on the veracity of Taleb’s disclosures.

As the author noted, a Helenus in this present day would be a fine thing for us all to have—if some of us didn’t kill or otherwise silence him for saying things that displeased them, anyway. Wikileaks, among many other institutions, would instantly become very small potatoes, indeed.

The Black Swan is about what we (think we) know, and how we get to thinking so—a subject known by the fancy name of epistemology. For the revisionist interested in the theory and mechanics of such vital processes—in which perforce every revisionist is in fact deeply involved—this book provides a profoundly rich reward of understanding.