For Email Newsletters you can trust
Contribute
Donate Now!
other ways to contribute »
Popular items
About the Author
Germar Rudolf

Germar Rudolf was born on October 29, 1964, in Limburg, Germany. He studied chemistry at Bonn University, where he graduated in 1989 as a Diplom-Chemist, which is comparable to a U.S. PhD degree. From 1990-1993 he prepared a German PhD thesis at the Max Planck Institute for Solid State Research in conjunction with the University of Stuttgart, Germany. Parallel to this and in his spare time, Rudolf prepared an …

Are there any problems that are unique to the ‘Holocaust’? Asking this question in a revisionist periodical seems to be a bad joke. But when mainstream scholars use this question as the title for a collection of essays, hope arises that finally they might understand that there are some unique problems with the ‘Holocaust,’ indeed. 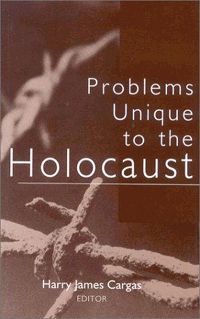 To cut this review short: no, they don’t get it. Rather than addressing any of the real problems of the ‘Holocaust’ – lack of physical and documentary evidence, evidence refuting or contradicting many claims, unreliability, false, and contradictory witness accounts, suppression of research, researchers, and research results, monopolization of the entire dispute – all the fourteen authors can do is to philosophize over moral dilemmas allegedly experienced by ‘Holocaust survivors’ who might have made arrangements with their suppressors and ‘Holocaust’ perpetrators in order to survive, or who made other morally ambiguous decisions. "Can Betrayal Ever Be Legitimate?", "The Moral Dilemma of Motherhood in the Nazi Death Camps", "Holocaust Victims of Privilege", "Suicides or Murders?", "Holocaust Suicides", "Indifferent Accomplices", "Reflections of Post-Holocaust Ethics"… This excerpt of headlines of some of the papers presented in this volume indicates that moral navel gazing of ‘Holocaust victims’ and their fan community is the main focus of this book.

Thus, contrary to what one might hope, this book is not solving any problems unique to the ‘Holocaust,’ it is actually a part of the problem, and as such it is exacerbating the problem. The second paper by David Patterson, for example, spreads lies with its claim that an "order came from Berlin" that "No more Jewish children are to be born." (p. 11) Of course, there is no evidence for this, and the fact that many babies were born and left alive in Auschwitz is evidence enough that this is not true. But this entire paper is built upon this lie: "in Birkenau maternal love was a capital crime" (p. 13). On pages 15-17, the author tells some atrocious fairy tales about Joseph Mengele. On page 12, Patterson quotes from a Jew’s diary:

"This murderous German nation! That [killing pregnant Jewish women] was their chief joy!"

This quotation goes uncommented, leaving a stench of anti-Germanism in the air.

The only headline which raised hopes to address a real problem – "Is Objectivity Morally Defensible in Discussing the Holocaust?" by Robert S. Frey – is also a disappointment. I wrongly hoped to find questions like ‘Is it morally defensible to discuss victim numbers, murder methods, exact circumstances of suffering, credibility of witness accounts, etc.?’ What Frey does discuss in his essay is merely the question if medical experiments with involuntary human guinea pigs should be permissible. Since I cannot imagine anybody answering this with yes, I wonder why this needs to be discussed in the first place.

Dogmatic opposition against revisionism flares up at several instances in this book. For instance, in his essay about "Intruding on Private Grief," Hunter defends the necessity that non-survivors must be allowed to critically write about the ‘survivors’ experiences:

"Shoah […] needs that common discourse if, for example, the lies of the deniers are to be countered. […] if we reject our common discourse, […] we lose the moral grounds upon which to deny the deniers their […] claim to ‘equal time’ and a ‘fair hearing.’" (pp. 127.)

Another morally superior author is Leon Stein, who defends the right of Christians to be ‘Holocaust’ scholars – which seems to be necessary, as most scholars are Jewish and view non-Jews with suspicion, as Stein claims (pp. 135-151). One argument used by him to buy an entry ticket into the prosperous field of ‘Holocaust studies’ runs as follows:

What an academic prostitute! Hence, this book is nothing more than another superfluous waste paper product churned out by screwed-up minds of the Holocaust Industry. A perfect waste of time, money, resources, and energy.