The Campus Project in 2016: A Quiet Campaign for Free Speech in American Universities

Having a presence in campus has been an ambitious project for us at CODOH. It was certainly our late founder Bradley R. Smith’s main task and objective to promote intellectual freedom and free inquiry in the American university, a place where taboo should not be bigger than ideas, and free inquiry may not be punished nor set aside under the rules of political correctness so we do not ¨offend¨ the sensitivities of a ¨vulnerable¨ group, some of whose ancestors had ¨suffered¨, all in the past, many of whom now aver the ¨unique monstrosity of the Germans¨ during WWII. 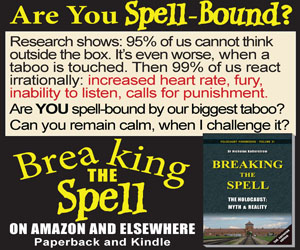 Free speech and free inquiry are themselves essential in any real democracy. Fundamental to knowledge. And one cannot slight either of those two ideals to comfort those who might feel threatened if the past as it is represented is questioned and even challenged.

That by itself is quite sufficient reason for keeping the fight for free inquiry and free speech on campus. There is where young students and professors should be openly and routinely examining that part of history known as the Holocaust.

The campus project is then the first opportunity for students and professors to step outside of the comfort zone where apparently, every possible question regarding a very complex historical event has been answered in such a way that no more questions may be even asked, much less answered. No free inquiry is necessary. Perhaps not even thinking and just reciting is best.

The Holocaust on campus, as elsewhere has been made a quasi-religious topic in which the main question is not whether you have or do not have more questions regarding the narrative of the Holocaust itself and its intricacies and impossible elements or if the professor who teaches the subject is in need of deeper knowledge of the history books ¨allowed¨ for such discussions, the real question is whether you believe or do not. Whether you can be brainwashed without posing any resistance, without asking any question that might put the entire narrative in danger. Whether they can deny your intellectual freedom and impose their taboo on you, the student.

So it all has become a question of fate. Fate as to what they are told by professors with all their didactic material at hand such as testimonies of survivors that are so convincing, (old men and woman telling these horrific stories, why would they lie, right?)  that, all that which you are told, must be true. And of course, you must add the media, the museums and all those movies that  have been created around the Holocaust so it is so easy to believe and much more comfortable but …it is interesting how despite how much the Shoah business keeps on growing, we also keep on bringing more and more young minds to our side. And there are testimonies of those who have encountered our ads, for example, on campus.

Many do not react right at the moment of exposure to material that questions the validity of the orthodox Holocaust narrative, but the seed is planted. Doubt and the drive to know, ¨the will to know¨ is part of human nature.  And it seems to work in our favor.

So last year we changed our ¨modus operandi¨ and we have opted for a stealth campaign on campus…the paradox is that our ads are  much, much bigger than what we used to be able to submit and  not only have gotten the approval of the student newspaper to run in the online version of this and that paper,  but we have been visible enough and also have been running ads in campuses that are some of the most important universities we have in the US. And these ads have not been pulled down, by the most part and have run the entire period we have placed them for.

We have of course encountered resistance in some colleges that are very important for us to have some presence and we have much more ground to cover. Also rejection of our ads is more common still than acceptances.

Yes, we have been able to run ads; that is something quite extraordinary from what used to happened, and those reading about this for the first time might not get the whole picture, but the common course of events is that our ads would usually be discovered by some academic and/or complaints to the student newspaper would in many cases end our business there, create a scandal and get the ad removed.

This ¨explosion¨ on campus would draw attention to our presence there and sometimes this provoked chaos would account for some ¨positive¨ exchanges between those supporting the publication of our ad and those fighting and complaining to get it taken down. Different factions on the campus, including professors would get involved, so that would give us an interesting x-ray, soto speak, of challenging the taboo on that campus. Unfortunately, that has been happening less and less often. And as one can imagine, going back with another ad to such campuses would be near to impossible, at least for a while.

It is too soon to say what happens next on those campuses where we have run ads repeatedly and nothing has happened. No complaints from the Jewish community. No Hillel on our tails. No ADL. No harassing the newspaper’s staff for running our ads.

So even though we have much more ground to cover, we must try new ways to re-invent our campus project, to get to more students, also to run ads on campuses we have never been on before, I can optimistically say that we are doing better than in past years and if it is not light that I see at the end of the tunnel, then I must have a very vivid imagination or hope for change.