The Clash of the Nobelists

Nobel-Prize-winning German writer Günter Grass sent shock waves through the international community when, on April 4, he published a poem in the Süddeutsche Zeitung titled “What Must Be Said.” In that poem, for his first time, he voiced his deep concerns about the fact that his country was supplying to Israel, a nuclear power, submarines from which missiles with nuclear warheads could be launched. In fact, Germany has supplied—given, actually—three of these so-called Dolphin-class submarines to Israel, and is building three more for the same “customer.”

Grass’s spectacular statement soon drew fire from another Nobel laureate, one who though of neither nationality, had publicly urged the hatred of Germans, and who holds a converse devotion to Israel, Elie Wiesel. This winner of the Nobel Prize in Peace, not for the first time, assumed the position of supporting Israel’s bellicose threats against Iran on the charge of seeking to develop a nuclear capability to offset that possessed secretly at least these 45 years now by Israel. In articles in Israeli and American newspapers, the rampant self-styled “survivor” of World War II slave-labor camps saw fit to impugn not only Grass’s reprehensible nationality, but his 1945 service in a military unit mounting a doomed defense against the Soviet conquest of his hometown, Danzig (now Gdansk, Poland).

The entire matter is redolent in the history of the Third Reich and that regime’s dealings with Jews in the territories it controlled, among whom according to his stories Elie Wiesel numbered. In fact, Wiesel’s 1958 novel La nuit (Night) not only launched its writer on a spectacular career culminating in the Nobel Prize, but has, along presumably with its translations into numerous other languages, recently been promoted from its initial classification as fiction to a status much more like actual fact, a memoir. Meantime, a growing but scrupulously ignored contingent of investigators advances the report that La nuit itself was plagiarized from a preceding (and much longer) book in Yiddish, Un di velt hot geshvigen (And the World Remained Silent), to which Wiesel claims authorship under the most dubious of circumstances. They assert that Wiesel relied upon that book, rather than actual presence in a labor camp, for the vivid portrayals he published of life as a slave of the Third Reich. 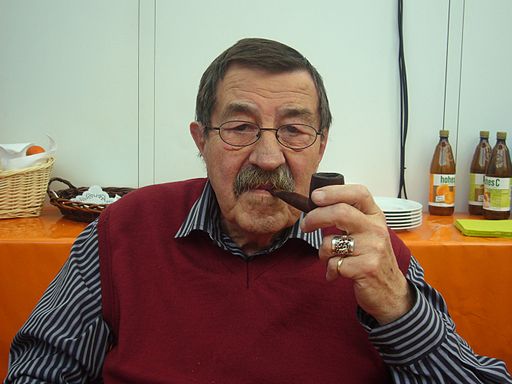 Günter Grass, as a conscript into the Waffen-SS, actually shares with his critic the fate of being enslaved in the service of the Third Reich, except that Grass, serving in combat, had to undergo enemy fire, and was in fact wounded. And after the war, unlike Wiesel’s hometown in Romania, Grass’s city of birth was taken over by a hostile power and if he had returned to it somehow, he would undoubtedly have been thrown into a POW camp, ending up like as not in Siberia, as millions of his comrades in arms did. As to history, Grass is known as a founding member of a literary genre known by the German term Vergangenheitsbewältigung, or coming to terms with the past, and Grass’s career was launched in 1959 with his novel (still a mere novel) The Tin Drum, gaining him the Nobel Prize forty years later. Grass’s past, which is considerably better documented than that of the enigmatic Wiesel, is extensively reflected in the Danzig Trilogy, of which The Tin Drum is the first book. It would appear that Grass’s claim to a mastery of history and its implications for the present day is at least the equal of, if not considerably superior to, that of his detractor.

The matter of which Grass wrote in his notorious poem is, of course, like all such matters, very much the outgrowth of the history involving World War II Germany and that of the country whose population acquired critical mass by 1948 from the large numbers of Jews it succeeded in collecting from among the millions who, quite like millions of non-Jews in the same continent, found post-war Europe a hostile place riven by poverty, ruin, cold, hunger and hatred. Wiesel, though he remained in Europe and later sojourned in South America and finally the United States, appears to have taken up the service of Israel in which he remains to this day, at around that time. Germany began in 1952, very early in its long recovery from the war’s devastation, paying direct reparations to Israel, as it still does today, continuing to increase a sum running to many billions of dollars.

Grass, who visited Israel in 1967 and 1971, has never complained about nor even mentioned this transfusion of German economic lifeblood to its sanctified beneficiary, but the day after “What Must Be Said” was published, Eli Yishai, interior minister of Israel, took the trouble to declare that Grass would be refused if at any point in the future he attempted a third visit. For his part, Grass merely noted that he had been similarly banned from entering the former German Democratic Republic (East Germany).

The strategic implications of Grass’s fears actually range far beyond those mentioned in his verses, in which he points with exaggeration reminiscent of Wiesel’s descriptions of the Holocaust, to the extermination of the Iranian people by nuclear missiles launched from Israel’s submarines. Yet, in some ways, even that horrific eventuality is an understatement of the scope in which Israel is able to menace humanity with its seaborne nuclear capabilities (capabilities that, in fairness, belong also at least to the United States, Russia, Great Britain, France, China, and soon India).

Israel’s missiles as yet have nothing like the range of missiles deployed by the United States and Russia, not to mention the other powers mentioned. And it is this fact that makes submarine launching of their missiles so crucial (virtually all of Iran lies within range of Israeli missiles launched from the Persian Gulf).

Israel’s submarines, unlike those of the other powers, are not nuclear powered. They incorporate elaborate but potent technology that enables them to cruise underwater using their Diesel engines for as long as a week without surfacing or using a snorkel device. It would be possible, for example, for such a nuclear-armed submarine to travel from Haifa to New York without refueling or even surfacing. With refueling, of course, such a submarine, of which Israel will soon have six, well over 90 percent of the population of the globe will live within range of Israel’s nuclear missiles.

Israel’s defense rationale for seaborne nuclear launch capabilities actually makes sense at first blush in the framework of a doctrine of mutually assured destruction, in which an attacked power retains the ability to launch a nuclear retaliation even after sustaining widespread, devastating destruction from an attacker’s first strike. Having an area little greater than New Jersey’s, Israel, unlike the United States or Russia, could conceivably lose its entire land-based retaliatory capacity in an extensive first strike. In such an event, the only retaliatory capability at Israel’s disposal would be its nuclear-armed submarines.

At present, however, the only powers capable of such a first strike on Israel are its devoted ally, the United States, and Russia, whose exposure to attack from the sea is severely limited to begin with. So Israel’s development of a seaborne retaliatory capability must be seen as preparation to deal with a threat that can only lie in the future.

Israel has, as recorded in Grass’s apocalyptical lines, made a great deal of noise over the past few years about the possibility of Iran’s developing an atomic weapon, though even if Iran developed such a weapon, it would lack a delivery system for it capable of deploying it against Israel. And for Iran to develop sufficient capability to deliver a pre-emptive first strike capable of neutralizing all of Israel’s numerous land-based retaliatory capabilities would take many years beyond such time as they first succeeded in producing even the first weapon and delivery system.

Israel's air force, in any case, can maintain an air-based retaliatory capability by the expedient of keeping nuclear-armed aircraft aloft at critical times, as the United States and no doubt other countries have done. Israel's crucial gain from establishing seaborne nuclear strike capabilities vis-à-vis the airborne alternative just described is, in fact, the attainment of global reach.

With this global reach, provided at bargain-basement prices by its contrite benefactor of the past half-century, Israel acquires the ability to threaten every country, and every city and hamlet, within 200 miles of the sea.

How it is possible not to share Grass’s abiding concern at this development from his own country’s policies can be explained only by an attachment to Israel’s devastative capacities that transcends concern for the safety of the other 99.9 percent of the world’s population.