The Dictatorship of Imbecility

Serge Thion, born in 1942, has devoted some 30 years to study, analysis and writing on social, economic and political issues, particularly in agrarian societies. He received a doctorate in sociology from the Paris Sorbonne in 1967. He is the author of numerous scholarly articles, half of them dealing with Southeast Asia, and several books, including Vérité historique ou vérité politique? (in collaboration with Robert Faurisson). A Serge Thion archive is being assembled at: [... now at aaargh.codoh.com, i.a.; ed.]

His essay on the work of Jean-Claude Pressac, "A French Scholar Responds to a Widely Acclaimed AntiRevisionist Work About Auschwitz," was published in the July-August 1994 Journal of Historical Review.

Once again, in his typically heavy-handed way, occasional film director Claude Lanzmann has made another flabbergasting admission. Speaking of his movie “Shoah,” he said to the Paris daily Le Monde (June 12, 1997): “Not understanding has been my iron law.”

Several years ago, while speaking of Spielberg’s “Schindler’s List,” Lanzmann said that if he had found authentic pictures of homicidal gas chambers, he would have destroyed them. What he precisely said was this (Le Monde, March 3, 1994):

There is not one second of archival material in Shoah because it is not the way I work or think, and besides it does not exist.... If I had found an existing film – a secret film because that was forbidden – shot by an SS and showing how 3,000 Jews, men, women and children, were dying together, asphyxiated in the gas chamber of Krema 2 in Auschwitz, not only would I have not shown it, but I would have destroyed it. I cannot say why. It goes by itself.

Such a remark should astonish only those who still don’t realize that Lanzmann is deranged. Fortunately, he could never find such a film because his nightmare is just a dream. (An official at Israel’s Yad Vashem Holocaust center pretends that such a film exists, hidden deep in the center’s archives. But nobody has ever seen it. As usual the proof lies in the invisibility of the proof.)[1]

During the war young Claude spent a very happy boyhood in a French village while his parents were hiding away from the Vichy and Nazi threat. The entire family survived. Much later he developed a sense of guilt about those happy years. During the fifties he was introduced to the circle of Jean-Paul Sartre and Simone de Beauvoir by his sister, who was one of Sartre’s mistresses (and who later committed suicide). In an expression of symmetry, he became Beauvoir’s lover, and thus anchored himself to this small but intellectually powerful clique.[2]

Unfortunately Claude Lanzmann has only a limited command of language. His most convincing arguments have always been, in his view, his fists and his genitals, the size of which he is prone to allude to – even suggesting to skeptical ladies that they check for themselves. In rhetorical ability he is overshadowed by his elder brother, Jacques, who is a very successful novelist, and against whom Claude has developed a rabid jealousy. Left with his limited abilities, Claude had an obscure career as a proof-reading journalist with the popular press. Several times he tried to write articles for Les Temps Modernes, Sartre’s monthly review, but he could never get further than five or six pages. 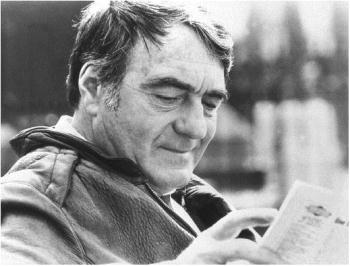 As a filmmaker Lanzmann found a solution to this deficiency, which permits one to manipulate images in ways that are not possible with written and spoken arguments. His first film, released in 1973, was a documentary about Israel. He knew nothing of the country, and the film reveals his ambivalent feelings. He could not understand or approve of many facets of Israeli life, but at the same time he found a new framework through which he could express his singular violence, ambitions and desire for recognition. He also discovered that Israel was the place where the money was.

This money was needed for his “Shoah” project. In 1977 he managed to convince Israeli Prime Minister Begin to contribute $850,000 in Israel government funds to this project, which Begin saw as “a Jewish national interest.” Additional funds were made available from non-government Israeli sources, and from the French government.[3]

Lanzmann conceived the film as another documentary. These days he expresses contempt for knowledge, and says he disapproves of scholarly research because it implies a comparative approach that is at odds with what he calls the “uniqueness of the shoah” (Hebrew for catastrophe). But back then he had to learn from the ground up, and to meet with scholars. He said that at the start of the project, in 1974, he “spent months in Yad Vashem.” He began by producing a rather conventional film.

We know this because when the Faurisson affair began in 1979, his film was not far from completion. We had inside knowledge of this at the time. Nadine Fresco, a failed historian who was with him during his filming in Poland and elsewhere, dutifully reported to us about the progress that was being made. Also, I had undetected spies on the editorial staff of Les Temps Modernes. In addition, I was seeing Lanzmann myself at the time, because I had been asked to help organize and write articles on Indochina for a special issue of this journal.[4]

The Faurisson affair was in itself a new catastrophe for Lanzmann because it showed that all the main documents on which he was relying were open to question. The columns of the temple were shaking. His mentor, Raul Hilberg, and Fresco as well, probably pointed this out to him at the time. The endless hours of pictures of trains and locomotives are directly inspired by railroad-addict Hilberg, who mentions this in a recent book.[5] This is how “Shoah” viewers have been railroaded.

Lanzmann’s film was thus almost destroyed by revisionist critique even before it was issued. He had only one way out: abandon documents altogether, and make a different film. Plunge into irrationality, play on memory as opposed to history, and set primitive gut feelings against understanding. That’s why he can now say “not understanding has been my iron law”. Kill one bird with many stones. The biggest difficulty was to return to Israel to beg for money, once again playing the schnorrer. But the funds for propaganda there are unlimited, it seems, and he got the gelt all right.

A new concept of the film emerged: lengthy interviews, sliced into small parcels, sprinkled throughout an endless, nine-and-a-half-hour-long saga. That’s a sure recipe for confusing and completely numbing, if not putting to sleep, anyone with no special training in the history and geography of the Second World War and of Poland. Actually, over more than ten years Lanzmann had acquired a good understanding of the historical questions, and has shown a consummate art of slaloming between them.

In the recent Le Monde interview (June 12, 1997), he was asked about his film’s “form”: “Of course, it is essential. ‘Shoah’ is a very complex narrative construction, built on circles and recurrence, sometimes four hours into the story ...” If the film honestly presented the interviews one after the other, complete and uncut, the entire pyramid would crumble into absurdity. “Shoah” is also stultifying because few of its viewers understand Polish (badly translated, specialists say), and because viewers cannot compare what was said two hours earlier with what was said five hours earlier.[6] But for the revisionist who knows the basic material, “Shoah” is particularly unimpressive because of the way it makes use of blatantly false testimonies. This has already been amply demonstrated.[7] Perhaps the revisionists should apologize to Lanzmann for the inconvenience they caused him by ruining his original plans, and pushing him to instead produce this mammothly boring cinematic work.

In general, the film’s reception has been quite cool. It’s been a complete commercial failure in the United States. While it has been shown on several German and eastern European television networks, France remains the place where Lanzmann, fully supported by the Socialist governments, has made the greatest inroads. A small clique of drummers kept the “Paris intelligentsia” in a state of mute reverence.

When Lanzmann later produced his third film in what he said was a trilogy, Israel-centered production entitled “Tsahal,” silence and consternation prevailed. All the suppressed fascist components of his sick personality emerged: uncritical acceptance of ultra-nationalist Zionist myths, adoration for military force, homosexual-masochistic admiration for young “warriors,” acceptance of torture and death as proper means of imposing Jewish power, and so forth.

Fortunately opinion-makers know how to forget and dispense with memory when it becomes undesirable. It now seems that “Tsahal” never existed. Nobody dares say the king has no clothes, that Lanzmann is an imbecile and a dictator – even though his own public statements remove any ambiguity on this point.