For Email Newsletters you can trust
Contribute
Donate Now!
other ways to contribute »
Popular items
About the Author
Paul Amner
No description available.
Why not help out and contribute one?
Featured documents
Search the Library
Advanced Search

The "Effektenkammer" in the Camps of NS Germany

“Effektenkammer” in Buchenwald camp in 2004

Every concentration camp of the Third Reich had a large storage building called “Effektenkammer,” but the largest one I have seen that is still standing is in the Buchenwald camp near Weimar. The Effekten­kammer was that building in the camps where the personal belongings of the prisoners were stored until the prisoner was released.

Marcel Eugene Prenant, a prisoner who worked in the Effektenkammer in KL Neuengamme, said in a testimony: 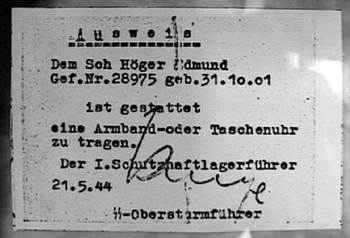 Although a prison uniform was issued and required, the Schutzhäftling (protective custody inmate) Edmund Hoeger, No. 28975 in Dachau, was allowed to wear his own watch and carried the paper to prove it.

“Our work was to gather the belongings of every prisoner who came into the camp. These belongings were divided up into different categories. Valuables were put into envelopes with the prisoner’s name, number and block number on the envelope, and a receipt was issued. On release and presentation of the receipt the prisoner was handed back his belongings.”

On arrival in a camp, every prisoner was checked by a doctor, given a haircut, a shower, a prison number, and a prison uniform. They were then assigned to a barrack, their own belongings were taken from them, for which they were issued a receipt, and the belongings were stored in huge warehouses, after the clothing and other belongings of the prisoners had been through the disinfecting chambers.

In the Neuengamme camp the “Effektenkammer” or storehouse was located very close to the camp brothel. On the map of the camp, the brothel is called “Sonderbaracke” (special barrack), probably where the prisoners received a “Sonderbehandlung” or special treatment.

It usually cost around RM 2.- for a prisoner to visit the brothel, and although it was allowed for prisoners in the camps to receive money from friends or relatives, they were restricted to the amount of money they could spend in a month, so if they wanted to visit the brothel for a “Sonderbehandlung,” it was not unusual for prisoners working in the Effektenkammer to steal certain articles, such as nice women’s underwear or perfume, etc. from the storehouse and give these as presents to the “Julias” (as the prostitutes were known in camp jargon) in the brothels.

A prisoner caught stealing was already in prison, so he was usually put in front of a court, convicted and put in a “Strafkolonne” (penalty detail) whereby he lost certain privileges, such as brothel visiting, smoking rights and was given much harder work.

On the other hand, any member of the SS Wachpersonal (guard personnel) caught stealing anything was of course liable to court-martial and would most probably be brought back to the camp as a prisoner himself or end up at the Russian front. Hardly worth it, was it? 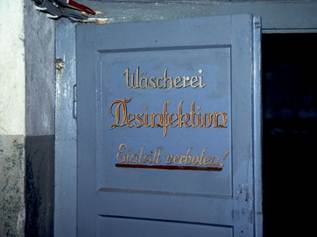 These two photos show the wash and disinfection room in KL Mauthausen (Austria) where the clothing and other belongings i.e. prayer shawls etc. were taken to be washed and cleaned after the prisoners had probably been traveling for a number of days before arriving at the camp. These devices worked with either steam, hot air, or the insecticide known as Zyklon B. 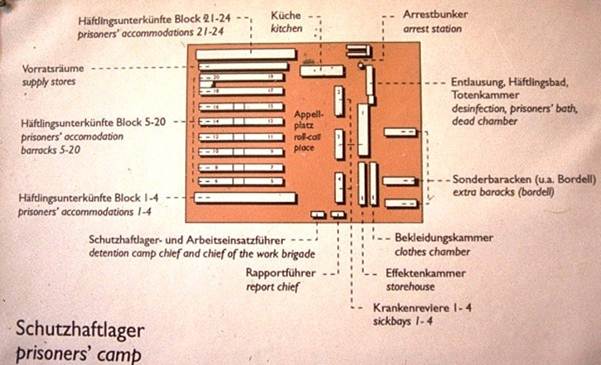 This is the layout of KL Neuengamme (on display in the camp museum). One can see down at the lower part of the diagram that the “Effektenkammer,” or storehouse, is almost right opposite the camp brothel. The brothel here is called a “Sonderbaracken” (special barrack) probably where the prisoners received a “Sonderbehandlung” or special treatment.