The Essene Origins of Jesus’ Teachings

I have long had a consuming interest in religion as a social phenomenon, especially since writing my doctoral thesis on Milton’s theology in the 1920s. When leisure time became available to me in the 1950s, I plunged into a study of pre-Christian religions, of which I found there were several of great importance. 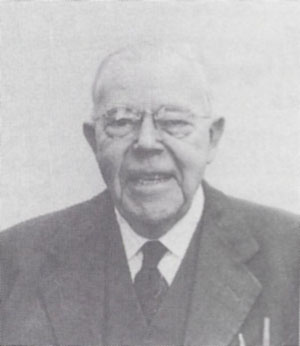 Among the most significant were the Persian faith of Zoroastrianism, the Pythagorean faith of Greece, the Hindu and Buddhist systems of India, and the Isis-Osiris religion that arose in Egypt about 2,000 BC. Over the centuries, the Isis-Osiris religion gave rise to a variety of savior cults throughout the Greek and Roman worlds, at least three of which had large followings.

Martin A. Larson received his Ph.D. in English literature from the Univeristy of Michigan, and a number of years taught at what are now Eastern Michigan Univeristy and the University of Idaho. He has been a member of the Journal's Editorial Advisory Committee since 1980, and has addressed several IHR conferences. Dr. Larson is the author of more than 20 published books, including The Essene-Christian Faith (available from the IHR for $8.95 plus $2.00 shipping). He lives with his wife, Emma, in Phoenix.

The result of my study was a book published in 1959, The Religion of the Occident, a work that required almost ten years of intensive research. A revised 725-page edition, with an introduction by Harry Elmer Barnes and an index, appeared later under the title The Story of Christian Origins. Issued by six different publishers, at least 50,000 copies of this work have been printed. (A fine soft-cover edition is still available from Village Press in Oklahoma.)

In this book I explain how an obscure Middle East cult could become the basis for Christianity, and how this dynamic new faith was able to largely replace the existing religions and become one of history’s most powerful and durable institutions.

In the centuries before the advent of Christianity, the official religions of deities such as Jupiter, Terminus, and the gods of Olympus that flourished in the ancient world were regarded by educated Greeks and Romans as little more than entertaining myths. Among the masses, however, the official religions had been replaced by a number of Oriental savior-cults that had spread so widely that they actually constituted the popular religion of the ancient world.

All of these were based upon belief in a great demigod who is born of a virgin, dies a sacrificial death, and, after arising from the grave, returns to the realms of glory. The blood and flesh of these saviors, which were symbolically ingested by their adherents in mystical and symbolical rituals, were believed to confer blessed immortality upon the partakers.

Of all the savior gods, Osiris was probably the most important. Isis, his sister (and wife), was worshiped as the supreme Mother Goddess, to whom prayers we were directed and who would confer everlasting glory upon the participants. In Rome alone, there were 58 magnificent temples honoring Isis.

Around 180 BC an obscure sect was founded in Palestine, the followers of which gradually separated themselves more and more from the ruling Sadducees and Pharisees. They dwelled by themselves in the desert, and after about 140 BC became more radical dissidents from Jewish law and practice. Over the years, they gradually absorbed elements from Zoroastrianism, the Pythagoreans, and the Buddhists.

It was at about this time that these cultists became known as Essenes, or Holy Ones. In the years that followed, they organized themselves into a secret communal order that practiced celibacy and proclaimed an imminent kingdom of heaven on earth where only the saints would dwell, while all others would be consigned to eternal punishment.

With the discovery of the Dead Sea Scrolls in 1947, knowledge concerning the Essenes broadened and deepened. This new evidence strengthened my conviction that the Essene order had exerted a profound influence on the writers of the Christian gospels, especially the book of Luke. 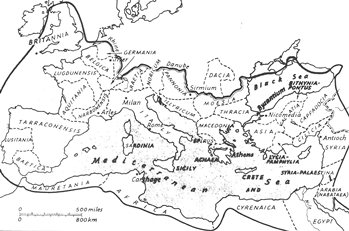 The Roman Empire at its height in the 2nd century, AD (click to enlarge).

Many Christian scholars believe that Jesus had been a member of the Essenes before the age of 30, when He emerged as a prominent speaker on the roads and byways of Palestine, proclaiming many of the order’s doctrines.

That many passages in the Synoptic Gospels (of Matthew, Mark, and Luke) are similar to what is found in Essene literature is simply incontestable, and His denunciations of the Scribes and Pharisees are virtually identical.

This Essene connection helps us to better understand why the Christian gospel met with such wide and ready acceptance among the Greeks, Romans and other peoples living in the Mediterranean area at that time. Consistent with the tenets of similar savior cults, the followers of Jesus proclaimed that here, at last, was the real Son of God, who had died an atoning death for sinners, Whose blood and flesh were to be consumed in order to ensure a blessed immortality, and Whose gospel conferred joy and happiness upon untold millions living in hopeless poverty.

The old gods of Isis, Osiris and Serapis, Mithra (Mithras), Orpheus and Dionysus, and Cybele and Attis were soon forgotten, replaced by a human-divine Being Whose passion and death became an all-consuming reality for new converts throughout the then-civilized world.