The Flight of Abbé Pierre

The previous issue of Smith's Report (No. 32) described the furor in France surrounding ex-Communist theoretician Roger Garaudy's embrace of Holocaust Revisionism (in an article by Christiane Chombeau available in the original French on the International Page of CODOH's Web site), and the indictment of Garaudy and his publisher, Pierre Guillaume, under France's obscurantist law criminalizing challenges to Holocaust orthodoxy. At this moment, the wire services are buzzing with new developments.

After the indictment of Garaudy, who broke with Communism (but not the left) to embrace Islam, his friend Abbé Pierre, like Garaudy an octogenarian, emerged to defend Garaudy's intellectual freedom and – horrors – to call for a debate of the details of Holocaust.

Now, the abbé is no ordinary friar. A hero of the World War II French resistance, during which, like revisionist historian Paul Rassinier, he helped Jews escape from occupied France, the abbé has been for decades an activist on behalf of the homeless, against racism, and in general a sort of "conscience of France."

Needless to say, his advocacy of free speech has created a furor in France and abroad.

Next to come forth for open debate on the Holocaust in France was Joseph Sitruk, the Grand Rabbi of France. As French journalist Jean-Francois Kahn wondered: "Could Faurisson and [French nationalist politician Jean-Marie] Le Pen have had greater hopes, even in their most delirious dreams?" (in L'Evenement du jeudi, 2 May 1996)

Not for long, however. The Grand Rabbi prudently withdrew his call, and Abbé Pierre's erstwhile friends and associates abandoned him. Expelled from the boards of several "anti-racist" groups, deplored by the Catholic bishops of France, the abbé condemned Holocaust "denial," but promised to withdraw support for his friend Garaudy only if Garaudy failed to admit "any mistake proven against him."

This stance caused no abatement in the campaign against the 83-year-old priest, who during the 1990's figured regularly in French magazine polls as one of the several most popular men in France. It was reported on May 29 that in early May the Abbé Pierre had left his native France to assume residence in a Benedictine monastery in Padua, Italy. 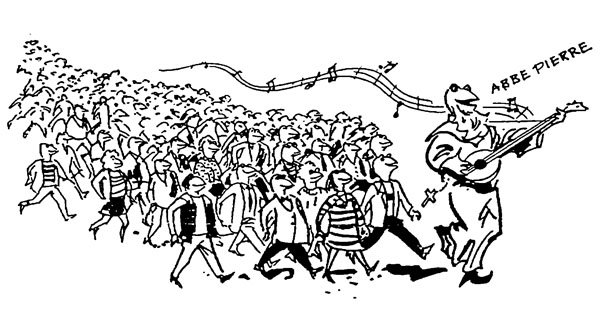 The siren song of Abbé Pierre.

Not to worry, however. The drive for a free and open debate of the Holocaust story picks up steam, around the world. In this, CODOH's role grows and its effectiveness increases, through its Web site – at this very moment transmitting proscribed revisionist material, including the Garaudy article which sparked this particular affair, to France and elsewhere around the world – and through its other activities.

I should say, with respect to Chombeau's article on Garaudy's conversion to revisionism (referred to above) being posted on our Web site in "CODOH International" – we have the complete text of the book in which Garaudy embraced revisionism – Les mythes fondateurs de la politique israelienne. And in addition to Garaudy we have texts in French by Jürgen Graf, Robert Faurisson, Serge Thion, Carlos Porter, and a new young writer, Jean-Francois Beaulieu. CODOH International has become one of our top draws, with more than 3,000 hits on this department in three months.