The Gas Chamber at Dachau: Now You See It, Now You Don't

We are all familiar with an instrument called the kaleidoscope, in which loose bits of glass are reflected by plane mirrors showing each bit of glass in 6 places at once, creating the illusion of a symmetrical design.

A similar phenomenon occurs in "War Crimes Trials," in which gas chambers are shown in 3 different places at once, and anywhere from 1 to 6 in number, creating the illusion of a Common Design (sometimes referred to as a Common Plan) for the extermination of human beings.

An example of this illusion is the Gas Chamber at Dachau, which appeared in April of 1945, disappeared from Dachau by November of that year, only to reappear at Nuremberg in December, after which it disappeared from Nuremberg and only entered the scene again as "proven fact" in the trial of Oswald Pohl in 1947 (along with the steam chambers of Treblinka).

The following is, I believe, a complete list of pretrial exhibits mentioning this "gas chamber", which was to be "proven" in the First Dachau Trial (trial of Martin Gottfried Weiss). The gas chamber accusation was dropped before trial. It is apparent that the U.S. Army Corps of Engineers knew before November 15, 1945, that no gas chamber could function in the manner described, and that other stories of gas chambers functioning in a similar manner were not true. Yet a decision was made to continue this accusation in other trials for political reasons.

"The new building had a gas chamber for executions... the gas chamber was labeled "shower room" over the entrance and was a large room with airtight doors and double glassed lights, sealed and gas proof. The ceiling was studded with dummy shower heads. A small observation peephole, double glassed and hermetically sealed was used to observe the conditions of the victims. There were grates in the floor. Hydrogen cyanide was mixed in the room below, and rose into the gas chamber and out the top vents. (Exhibit 34)

Dr. Blaha witnessed the first test of the gas chamber in the new crematorium in early 1944, and examined the 7 victims used. Two were killed in the first test, an experiment to determine the amount of gas needed to kill a person (Exhibit 5).

"Weight of general testimony shows that the gas chamber was developed successfully to get the desired results. Witness after witness mentions seeing living persons herded into the crematorium and never being seen again. When the chamber was not used it was because of the shortage of the materials to make the gas, the same reason for not using the crematorium continually, and certainly no change of heart on the part of the SS in charge. No witness can testify as an eye witness to an execution by gas except Dr. Blaha, because the crematorium and gas chamber was made up of condemned prisoners who lived in the crematorium yard and once in there, never left the area alive. Men picked for such duty knew that they were to be killed as persons too dangerous to the SS as possible future witnesses". 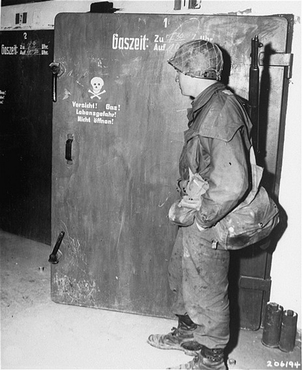 A solder from the U.S. 7th Army examines the door to the supposed gas chamber of Dachau.
(USHMM: Courtesy of the National Archives and Records Administration, College Park)

The existence of a gas chamber at Dachau was not upheld in the judgment at Nuremberg.

Pretrial Witness Interrogations and Other Exhibits.

000199: "In February 1945, 65 Jewish children... arrived in the camp..; the children started crying and said: Please don't put us into the gas chamber. When we replied there was no such thing as a gas chamber, they said: oh yes, our parents told us that we were going into another camp and that we would be put into a gas chamber. We repeated there was no such thing, but they answered: oh yes, oh yes, our father or mother, or uncle or cousin, ... were put into the gas chamber because they were Jews. The children were kept in the camp for 2 or 3 weeks and were sent to the extermination camp in Auschwitz. Even old and hardened prisoners who had witnessed great inhuman treatment were deeply moved by the sight of the children".

000204: "There was no gas chamber in the camp in working order (!). A gas chamber was being built in the crematorium and in January 1945, work was going on at a high speed. The chamber was soon completed except for the gas boiler (?). A railway worker who had to go in and out of the camp told me that a boiler had arrived at the Ostbanhof, Munich, from Auschwitz. But this boiler, together with many gas cylinders had been destroyed in an air raid.

000212: "The years 1940/43 seem to have been the worst period in Dachau and other similar camps. I was told by eyewitnesses of the mass extermination of Jews who were sent in a gas chamber 500 at a time..." report on Prison Camp conditions dictated by Captain P.M. Martinot, 23 May, 1945.

000248: "Another specific provision was for a crematorium of four ovens and one gas chamber (called "desinfection chamber") (!). I do not know whether this camp was ever built".

000250: "The most important building projects which were planned and executed during my presence were as follows:... one crematorium called "Barracke X" in the concentration camp at Dachau, containing six individual gas chambers (!) and 2 combustion ovens".

000277: "The Polish priests were compelled to build the well-known crematory and gas chambers (plural)... they were dragged by their legs to the chambers of death..."

000379: "Source said he visited a building that was designated as a shower room, but which in reality was a gas chamber".

000417: "The following Signal Corps photos are contained in 1222614 and have been retained in the War Crimes Office in Washington D.C. Gas Chambers (plural)".

000420: Photo of soldier in front of door reading "Gaszeit: (illegible) Vorsicht! Gas! Lebensgefahr! Nicht `ffnen!... Dachau Atrocity Camp: Gas Chambers (plural), conveniently located to the crematory, are examined by a 7th Army soldier. These are part of the horror chambers used by the Nazis before the 7th Army liberated the camp.

000445: "The following Signal Corps photos are contained in 12226 and have been retained in the War Crimes Office in Washington D.C.... (Gas Chamber)" (singular).

000455: "Photo... Yank examines fake showerhead in the gas chamber (singular) at the Dachau Concentration Camp. Located in the crematory, unknowing prisoners were brought into the shower room marked "showers". here they were stripped and after the door was closed, they were gassed".

000485: "Here also, there were gas chambers (plural) camouflaged as "showers" into which prisoners were herded under the pretext of bathing and the huge crematory ovens".

000486: "Inside as well as outside (?) were gas chambers (plural) with adjacent crematory ovens... almost 100 naked bodies were stacked neatly in the barren room with cement floors. They had come from a room on the left marked "Brausehad" for "shower bath". It really was a gas chamber (singular) a low ceilinged room about 30 feet square. After 15 or 20 were inside, the doors were firmly sealed and the faucets turned on and poison gas issued (!). Then the bodies were hauled into a room separating the gas chamber from the crematorium. There were four huge ovens with a huge flue leading to a smokeblackened stack".

000496: "We saw the original gas chambers, four huge cells (!) into which victims apparently were crowded and put to death. Later on this method was improved by construction of a large chamber with a jet in the ceiling, similar to showerbath sprinklers. The prisoners undressed in a room, where a man sat, with flowers on his desk, who gave them soap and a towel. Herded into the shower room, the gas was turned on while the operator watched its effect through a telescopic peephole".

000506: "Here one can see for oneself the lethal chamber where the people the Nazis doomed were gassed. It has imitation shower baths, installations with dummy sprinklers set in a pipeless ceiling (!), and gratings looking like water drains in the floor through which gas was sent" (So did it come through the floor or through the ceiling?).

000509: "Jarolin (deputy camp commander at Dachau, defendant in Trial of Martin Gottfried Weiss)... said he thought they had gone to the gas chamber".

It was admitted by the prosecution that many inmates were mentally ill, had lost their minds, or were wandering around in a mental daze, yet their statements were accepted as "fact", no matter how contradictory. It was also admitted that Dachau had 6 hospitals and that 15,000 people died of disease in the last few months, and that emaciation is a symptom of dysentery. Defendants were convicted of "aiding and abetting in a common design", even if no accusations were made against them by inmates (case of Gretsch and Schoepp).