The Guilt of Oskar Gröning and the Innocence of Jewish Sonderkommandos

The much-ballyhooed trial in Lüneburg, Germany of a 93-year-old former SS man who served at Auschwitz over 70 years ago adds nothing to the extant case for the Holo and subtracts nothing from the revisionist case against it. Its chief interest is its insistence on the enhanced culpability of the defendant, Oskar Gröning. Nearly all previous defendants in German concentration camp trials were accused on the basis of specific, direct acts against inmates. Gröning, the prosecution concedes, took part at worst in the appropriation and the occasional guarding of the property of deportees to Auschwitz —yet finds him complicit in the murder of 300,000 people.

The different “ramps,” or platforms, at Auschwitz, where prisoners and their baggage detrained are peripheral to Gröning’s admitted role—he interrupted his bookkeeping work for guard duty on the ramp only three times. Nevertheless, to date the prosecution, echoed by the mass media, has focused on his activity at the ramp, where his actions in guarding and removing the assembled property, in the words of a German prosecutor, helped reassure the next arrivals that nothing was amiss. Missing, however, from the courtroom and media descriptions

of the Auschwitz ramps was any mention of the Jewish inmates who, according to the Exterminationist version of Auschwitz, served at the ramps and, far more than Gröning could ever have, worked to deceive the arriving Jews into swarming docilely into the Nazi murder pens. 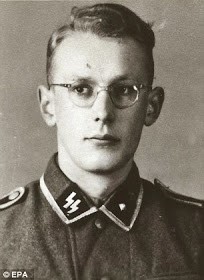 Oskar Gröning
(I was going to say
“Before revisionism,” but...)

Readers of Smith’s Report will recall our recent focus on a massive blind spot of the Holocaust establishment: its failure to judge the actions of the Jewish Sonderkomman­dos, who by the Holocausters’ own account helped deceive, lure, trap, and murder more than a million Jews in the gas chambers of Auschwitz. Rather than a searching moral examination of what, if the Holocaust claims are to be believed, must amount to the most murderous treachery of all time, the Holocaust establishment has consecrated the likes of Filip Mueller, Abe Bomba, and other SK men at Auschwitz and elsewhere as moral authorities as well as heroes.

The Holocaust lobby’s excuse for the Sonderkommandos smilingly tricking their fellow Jews to their doom, day after day, is that, unlike Oskar Gröning, the Germans would have killed them for refusing. But, given the alleged nature of the Holocaust, wouldn’t dying rather than being in any way complicit in the murder of their fellow Jews have been the better, the more honorable thing? Of the hundreds of thousands of American soldiers, sailors, and marines who died in the Second World War, how many would have preferred to survive by assisting in the mass slaughter of defenseless American civilians?

The latest effort to prolong the sway of the Holocaust cult by expanding the culpability of wartime Germans through the Gröning trial points beyond Oskar Gröning and the Germans, to both the treacherous role of hundreds of Jews as accomplices in the Holocaust and to the even more dubious part of the Holocaust lobby in honoring these traitors as heroes.

Clearly, the Lobby and the Son­derkommandos are on the horns of a dilemma here—and it’s a dilemma that only we Revisionists can rescue them from. For only if the gaschamber claims are false do the Jewish Kapos of the ramp and the shower rooms emerge with something like honor.