The Holocaust: Based on a True Story

Truth, history, beliefs. These come to us by various means, few if any based on what might be called purposeful (to us) gathering of facts and dispassionate weighing thereof. Much of what passes within us as knowledge, belief, or just habitual supposition came to us almost willy-nilly, except for the pervasive influence of our environments, which in turn derive from the knowledge, beliefs or habitual suppositions of those around us starting, for most of us, with our parents.

Wittingly or otherwise, our parents pass on to us what they know/think in a million different ways, many based on what they say and how they say it (even about very peripheral subjects), and a great deal on how they act or react, particularly to what others say, and particularly to what within what others say is antithetical to them. We are spawned and raised in a sea of prejudice, misapprehension, fear, and even outright malice, some or all of which is fully justified by the prejudices, misapprehensions, fears and even outright malice with which those around us (and far away, as well) are spawned and raised. 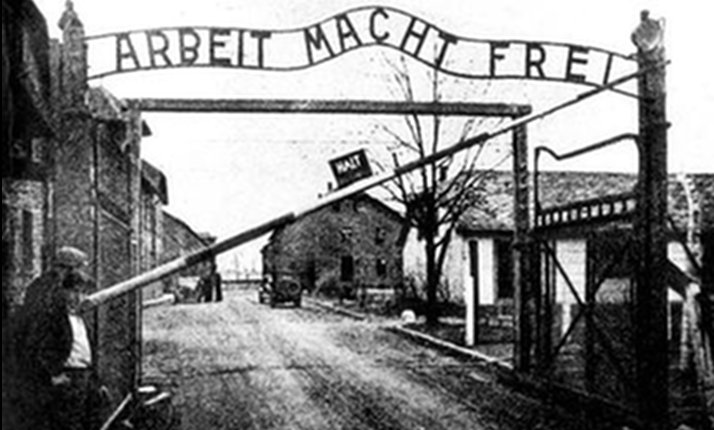 Most recently, there was, for Jews, the National Socialist program of Jew-slighting that has been festooned in retrospect with the moniker “the Holocaust,” a grandiloquent term if ever there was one for the program by which the government of Germany sought to purge from its society the influence, and eventually the presence, of Jews within it. As Germany, under this same government, found itself on the losing side of a global scrum against it, matters took on a grievously more-serious aspect for everyone in Germany and the territories it sought to hold, and the particulars of the “true story” behind the Holocaust became grim beyond most people’s imaginings.

Imaginings. War, ethnic cleansing, and the supremely toxic mixture of the two, both challenge and invite imaginings as little else can. And World War II, culminating in the utterly unimaginable detonation of atomic bombs over Nagasaki and Hiroshima, challenged the imaginations of people the world over as they had never been challenged before. And, at the same time, offered opportunities to certain imaginative souls that had never been offered before, a cadre headed, perhaps, by the late Elie Wiesel, he of the burning pits into which Nazis threw live Jewish babies and other such phantasmagoria, for which he garnered a Nobel Prize.

Opponents of objective inquiry into the facts of this period, these places, and these groups have instituted criminal sanctions in most of Europe against such, and massive sanctions against journalists, historians and academics in general who would breach the ramparts they have erected in North America. They have managed this partly on the strength of sheer money and political power, and partly on the excuse that The Holocaust, like many a largely fictional movie or book, is Based on a True Story(ies).

There is/are true stories here, many of them tragic, most of them horrific, and all of them deplorable as deplorable can be.

And there is the tip of the wedge. Tragic. Horrific. Deplorable. And Based on a True Story(ies).

Yes, some of the stories are true (these are stories usually not even told). Other stories aren’t true as to the tellers, but seem to have been true as to those the tellers claim to have witnessed. Other stories, while not true of those claiming the experiences, are true to things the tellers might have heard, after-the-fact, or even contemporaneously. And some just aren’t true to much of anything, other than a general impression held by the teller, who is eager, and much-assisted, to impart it to others, who weren’t involved at all.

Myths grow of just such things. Christians battling lions in the arena. Christ on the cross. There were “peripheral” people in this story, and many, many others claiming, like Forrest Gump, to have been peripheral. I Saw Mengele. He Saw Me. I escaped with my life. So many others didn’t. Go ahead—heap upon me the sympathy and regret you would expend in behalf of the martyred millions. I can take it.

Bless you. Your secret is safe with me.  As for my secret … I’ve chosen to make it no secret at all. And I am, indeed, called all those terrible things.

But under the right social conditions, Based on a True Story morphs unseen into Unassailable Truth, truth, indeed, whose questioning becomes criminal racism in dozens of otherwise-civilized countries. Desperate and/or vicious, ever-vigilant “sponsors” are required for the implementation and maintenance of this transmogrification.