In January 2004, yet another memorial is due to open to commemorate the Holocaust. This memorial, a huge abstract affair, is to be constructed near Berlin's famous historic landmark, the Brandenburg Gate. Although 50 million marks have been promised by the German government to cover the building costs of the memorial, an organization called the Foundation for the Memorial to the Murdered Jews of Europe is attempting to raise the equivalent of another 2 million dollars to fund an information center associated with the memorial.

It is this fund raising attempt that has sparked some controversy in Germany. The advertising campaign designed to raise funds for the information center consists of a billboard ad that is to show up all around Germany that reads, "den Holocaust hat es nie gegeben," "the Holocaust never happened." The slogan is plastered over a beautiful pastoral mountain landscape rather than concentration camp photographs as one might expect. This odd advertisement, especially odd in Germany where those 6 words would typically result in a jail sentence, was designed to shock the average German. The ad does contain significantly smaller text that explains itself a bit, "There are still many people who make this claim. In 20 years there could be even more. Make a donation to the memorial for the murdered Jews of Europe." 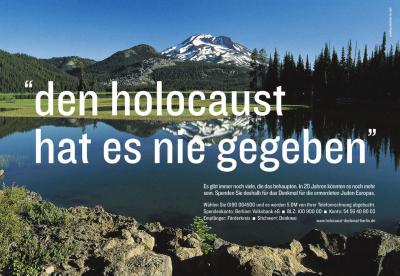 As with so many of the recent crop of Holocaust museums and memorials, it is clear that combating Holocaust revisionism is a major motivation for the work. But what should we think of an organization that raises money for an information center through the propagation of disinformation? Those who combat revisionism frequently make arguments, similar to this ad campaign, which oversimplify the revisionist position to the point of absurdity. In fact, rather than countering revisionist arguments, the anti-revisionists label their opponents "deniers" along with a string of even more abhorrent epithets. When choosing to engage the Holocaust revisionists, they often, as in this ad, create what they claim is the revisionist or "denier's" position and then debunk that rather than taking on real revisionist arguments.

The standard dictionary definition of "Holocaust" is "the systematic destruction of over six million European Jews by the Nazis before and during World War II." Often added to this definition is the means of the destruction, gas chambers. Revisionists have argued for years that material evidence for gas chambers is non-existent. Similarly there is no evidence of a Hitler-order, or an order by any top-ranking German official to exterminate the Jews of Europe. In addition, evidence suggests that the number six million is at best a symbolic number and at worst a wild exaggeration of the real number of Jews who died during this period. Today commenting or writing that these elements of the orthodox Holocaust story are untrue or even debatable is a criminal offense in many countries including Germany where such statements could result in a five-year prison term.

Defining an historical event by the sum of its details appears to be unique to the Holocaust. We never, for example, define the Second World War by the number of Europeans killed or for that matter who was responsible for starting it. An historian who showed that fewer British died during the Blitz or fewer Germans died during the saturation bombing of its cities, would hardly be called a "World War Two Denier." We do not need to limit ourselves to the Second World War. Recently investigations showed that fewer Americans died during the Korean War than previously thought. No one was led to believe that the Korean War did not happen.

The Holocaust legend is so locked into the sum of its parts that it typically goes beyond even the definition provided above. Essentially anything that anyone suggests the Nazis did to the Jews of Europe becomes part of the Holocaust legend. Some of these stories and elements are quite true and not refuted by anyone; others are crazy tales that few believe. Therefore historic facts like, concentration camps, crematoria and tattoos become merged with human-skin lampshades, shrunken heads and pedal-driven brain-bashing machines. While revisionists have shown the latter more absurd claims to be false, all agree to the former facts. The anti-revisionists typically use a sleight-of-hand trick to mislead those less familiar with the body of revisionist thought. By claiming that revisionists argue that the Holocaust never happened, anti-revisionists would like the public to think that revisionists deny the existence of concentration camps, of crematoria, and of Nazi persecution of Jews.

In fact there is no question about the existence of concentration camps, crematoria or that the Nazis persecuted the Jews. It is in this vein that revisionists would like to redefine "Holocaust" as "the tragedy that befell Europe's Jews during the Second World War."

With this in mind, the Foundation for the Memorial to the Murdered Jews of Europe should not be adding to the misinformation campaign surrounding the Holocaust. Rather than seeking funds for an information center in a country in which investigation and publication of research that varies from a standard liturgy results in persecution and imprisonment, the Foundation should be seeking to repeal these repressive laws. The historical record of the Holocaust will never be corrected nor properly understood as long as Germany and other countries insist on a single dogmatic interpretation.

Norman Finkelstein has called "The Holocaust" the "ideological representation" of the historical events that comprised this period. The Foundation warns us that in 20 years there could be more people who don't believe that the Holocaust happened. If the ideologues, the propagandists, and the politicians insist on a single rigid interpretation of the events infused with their own ideology, the Foundation is quite correct, many more people will not believe that the Holocaust happened. The ideological Holocaust will be relegated to the dustbin of history. Hopefully at that time the real history of the tragedy of the Jews of Europe will not be thrown out with the myths.