The Holocaust in the Palm of Your Hand

It’s a gas valve—no doubt about that to anyone (apparently there are very few of us) who has ever put a wrench to a gas pipe. It would have controlled a flow of natural gas or other gaseous fuel to a burner in an oven or a furnace the way millions of such devices do every day in homes, offices and factories all over the world.

But wait! What’s this? Clearly stamped into the side of the casting? It can’t be. But yet … there it is, plain as day with all four of its crooked arms: a swastika! Could this be a Nazi gas valve? What could make it a Nazi gas valve? Could it have regulated the gas being fed to the furnace of one of the crematoria in which the Germans are said to have burnt up the bodies of millions of Jews they had just killed? Would that have inspired the supplier of the valve to stamp the symbol of the German National Socialist Workers’ Party into the side of the valve, neatly and squarely? Would the Nazis buying the valve, in how many millions of units, have specified that their fearsome rune be emblazoned on a mere fuel valve? If not, could the valve have had an even-more-evil purpose? It clearly regulates gas … Oh, no! The thought of poison gas valving through to the quivering lungs of millions of innocent, suffocating Jewish babies and their mothers is too much to bear.

But not too much to pay for. In South Florida on October 11, Jay Sugarman Auctioneers offered up the very valve, one side of which can be seen in the photograph above, for sale in their “Ultimate Evil Historical Auction” (www.jaysugarman.com/past-auctions [This image has since been removed; ed.]) along with other mementos of evil such as purported Ku Klux Klan robes, daggers, prison correspondence of serial killers and other fetishes contrived to stimulate the perfervid imaginations of people susceptible to that sort of thrill (and willing and able to pay for it). 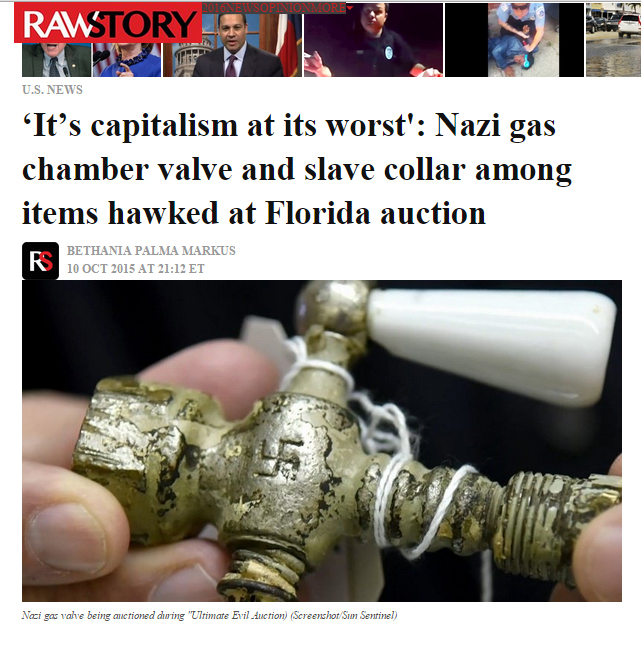 But that valve! Aside from being a real gas valve, was it really stamped with a swastika die by its manufacturer? Yes, it was, as will be shown below. Were there others like it? Yes, there were, thousands and thousands of them, and a number of them can still be found in collectors’ (and auctioneers’) hands.

Separating the gullible or sensation-prone from their money. This sounds like a lot of rackets, including the stupendous one on the body of which J. Sugarman’s (notice the name change?) little scam represents but the tiniest, least-harmful of warts. Yes, if indoctrination in gruesome images, staggering numbers, and inviolate taboo over the past seventy years had not already inculcated the most-horrific fairy tales imaginable in the minds of the vast majority of Westerners, that harmless American gas valve could not be passed off as anything but the little chunk of scrap metal it actually is. But here in Sugarman’s playground, as a result of an immortal propaganda campaign kicked off in World War II, it’s easy not only to mulct the impressionable of small bits of change such as Sugarman parted with his genocidal treasure for, but also to tax and fine people born long after the end of the Holocaust for billions of dollars and to transfer that to countries and organizations that claim to use it in behalf of Holocaust “survivors” or their children, or their friends, or someone, anyway. 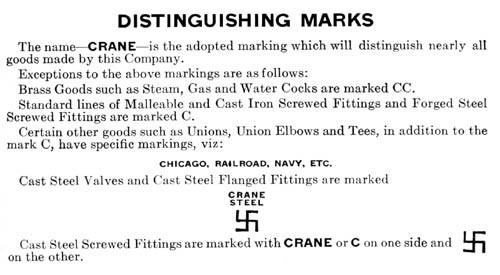 There are two easy, obvious ways to positively identify the little valve as the product of the American Crane Steel Company—ways that don’t occur to people hell-bent on claiming it as proof of German depravity and aren’t revealed by the auctioneer or anyone else standing to make a little profit at the expense of zealots and fools. The first, and least-technical (fable mongers hate technical) would be to turn the valve over to the side not shown in the photograph and scrape off the layers of paint, rust and crud to reveal the name (see picture) of Crane cast into the far side of the moon.

The other way, never even adduced by the numerous commenters defending and attacking the notion of the gizmo’s Nazi origins, would be to identify the many threaded portions of the valve, both those internal to the piece and those used for connecting pipes to the valve (the poor thing does nothing at all if it isn’t connected to something else, after all). There seem to be few engineers or mechanics drawn to this subject, it would seem. If more engineers or even just mechanics like me were drawn to these subjects, we’d have more Arthur Butzes, Fritz Bergs, Germar Rudolfs, Wolfgang Fröhlichs, and Fred Leuchters laughing at the holy Holocaust scriptures, or doing so publicly rather than in secret as they now must do. It’s notable indeed how many scientists and engineers are to be found among Holocaust revisionists, and how few among those promoting the creed.

Let’s say we’re going to incorporate this treasure into a genuine, working, full-scale model of a gas chamber, or a crematorium—it doesn’t matter which. We’re going to take this baby back to its notional “home” in Germany and hook it up to real German pipes such as it would have been used with, “vintage” pipe left over from the Thirties or Forties, if possible …

Well, let’s clean up those painted, rusty threads and screw them right into our carefully selected and restored pipes and fittings, then, shall we?

They won’t. They don’t fit! What’s wrong here? Why can’t I make my gas chamber/crematorium out of all this authentic German stuff? The answer is (obviously to anyone who ever fixes plumbing, or anything that screws on and screws off) is: the thread isn’t German—it isn’t metric, like what the Germans, French, Poles and Russians have been using for over a hundred years, and even the British finally switched over to in the Seventies.

Well, what does fit those damned threads (technicalities, technicalities)? Back where Sugarman was hawking this fool’s gold, in America, all the pipes and fittings are NPT (National Pipe Thread; tinyurl.com/nr3xdv8), a standard denominated in inches and used there for over a hundred years even while the rest of the world was switching over to that goofy metric system they use. Do these NPT fittings fit? I don’t know; I don’t even know for sure that the metric fittings would not fit, but I do know that American manufacturers of pipe, fittings, and things that connect to them like valves, did not use the metric system of threading, and have used standards from which today’s NSP was derived for a long, long time. I think American fittings would fit just fine, but if they didn’t, it’s still possible, with common workshop tools and tables of data to measure threads and identify them without fitting anything to them. And that innocent little valve has threads, like the one holding the nut over the spring at the bottom of the stem, that don’t connect to anything external to the valve. If you take the valve apart (easy with a 3/8” – or 10-millimeter – hex wrench), you can identify that thread, too. Manufacturers in America—or Germany, or China—don’t just make up their own threads, especially where the threads on their products have to mate with the threads of other products. They use “standard” threads—threads for which the tooling (threads do have to be made, every time) is cheaply available where the manufacturer is (tinyurl.com/mjqnutv)—wherever they can, which is most of the time. This is just reality—a kind of reality that does not appeal to those who wish to transcend reality in the service of myths and horror stories they find it profitable to disseminate among the lowing, trusting, ignorant masses.

So, we’ve got our valve in and hooked up, and flowing some harmless test gas—say, air—and the whole piping system is … American. So, what have we got, an American genocidal gas chamber? Wait a minute, it was the Germans who designed, built and operated genocidal gas chambers (or crematoria), not the Americans! And the Germans didn’t even have American piping systems, nor would they have used them. Something’s terribly wrong, here. Ah, fugeddaboudit—it’s a technicality. No one will notice. No one will even care. Thread, shmead.

And that’s the entire Holocaust phenom in a nutshell, or a valve, that you can easily hold in the palm of your hand. It’s real, it happened, it was made with a swastika. But it’s fake, too. There were no gas chambers; fewer than a million died, and fewer still deliberately killed; and the Nazis, for all their terrible mischief, never set out to kill Jews just because they were Jews. The valve wasn’t made in Germany, and no Nazi ever laid eyes on it, much less a hand. But it’s real; yes, “it” really happened, and a great deal of it was deliberate, or otherwise culpable. And innocent babies and their mothers did die, in great numbers.

Above all, there’s money to be made, here—tiny amounts like con artists like Sugarman garner from his credulous bidders, and billions upon billions such as the US taxpayer involuntarily showers upon Israel each year and the reparations payments Germans have been making since before most of them of today were even born. And Israel’s depredations upon the territory and peoples of its neighbors continue to be supported by most of the West’s governments even after the atrocities visited upon the previous inhabitants of Israel’s original places in Palestine.

The Holocaust remains a terrible thing in our present day—quite as terrible as it ever was, aside from whether its scale today is greater or lesser than the scale of the earlier events was.

The only defense against it, and it is only a partial defense, bought at the expense of assiduous attention and the experience of deep disapproval and mindless condemnation, is alertness, skepticism, and a relentlessly open frame of mind. These, fortunately, besides liberating oneself of oppressive burdens of conscience and misapprehension, carry their own rewards in many fields beyond the plague of Holocaustery that today so thoroughly saturates our culture.