The Impotence of Force

The prospect of American military intervention in the Syrian imbroglio dominated global news through most of this September past. As the situation festered, it appeared that the Obama administration had in mind to fire a number of its super-accurate missiles into Syrian territory to “punish” the forces—said to be the legacy government of Syria—that had used poison gas against some thousands of Syrians in various places in Syria. The development from President Obama’s famous “red line” to trigger American intervention recalled an ugly concoction of two previous incidents, one almost laughable, the other literally earth-shaking: Bill Clinton’s “Monica missiles” launched against targets in the Sudan and Afghanistan in 1998, and the monumental assault on National Socialist Germany motivated in part to punish it for singling out the Jews in its territory for harsh mistreatment including, allegedly, the use of poison gas on them.

The first of these, a few missiles launched from naval vessels, was trivial in the grand scheme of things, while the second was eternally tragic for all concerned, especially the intended beneficiaries (the people of the United States). Both exemplify the horrendously perverse effects of employing, or threatening the use of, force to make groups of people who are killing each other stop doing so. The counterproductive effects of such campaigns are so manifest, so predictable, so extensive, that sustained consideration of them leads inexorably to the cynical conclusion that they are in fact launched for reasons entirely unrelated to the welfare of any possible future victims of the targeted “genocide.” Collectively, they represent a grotesque corollary of the ironic slogan, “Kill for Peace.” For his particular enterprise, Barack Obama made heavy use of the manic—and largely unfounded—fear of poison gas so trenchantly deconstructed by Samuel Crowell in his blockbuster The Gas Chamber of Sherlock Holmes, extensively reviewed in the Summer 2011 issue of Inconvenient History.

The depths of travesty that can be plumbed by such stratagems might best be illustrated by the “resolution” implemented by then-Attorney General Janet Reno of the impasse at the premises of the Branch Davidians in Waco, Texas in 1993. In order to, as she put it, put a stop to abuse of young children in the besieged group by their own parents, she employed—that’s right—poison gas, along with fire, just, it would seem, to make the assault a true holocaust. Among the 76 fatalities were 22 children under 18, plus one more unborn. Did the government kill these children, or did the Branch Davidians, during the battle? Does it matter? Could one even decide? It seems inescapable that the “rescue” killed them.

Even today’s supposedly super-accurate missile weapons can neither avoid “collateral” damage to innocent parties nor to their property, and even if they could, they have approximately zero likelihood of exerting the hoped-for effect on the perpetrators of the internal violence being opposed. The weakness of such expensive, destructive and inflammatory tactics begins with the information used in aiming them: (a) will they destroy what (or whom) they’re aimed at? (b) is what they’re aimed at the desired materiel (and/or personnel)? (c) if so, all of it? Much of it? And (d) is there really little or none of that collateral nearby, or along the way there? 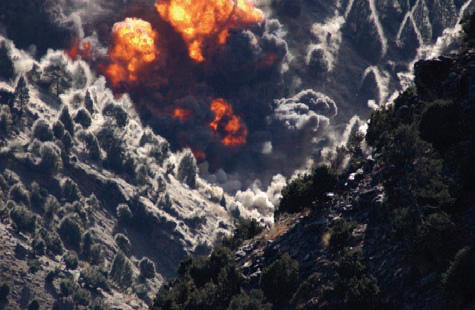 US airstrike during the battle of Tora Bora, a cave complex in eastern Afghanistan, November or December 2001.
By Members of team Juliet Forward (exact member unknown; either CIA or US military) [Public domain], via Wikimedia Commons

Suppose that the US had launched the most-effective “surgical” attack in history and destroyed all the poison-gas weapons possessed by either side in the conflict, along with all the people who had used, or might in the future use the weapons, while inflicting zero damage on any person or his property who was not involved in the use of the weapons. Mission accomplished, right? Well, what was the mission, after all: to stop the use of poison gas (accomplished), or to stop or even just reduce the killing, deliberate and otherwise, of innocent persons who had not acted in favor of one side or the other in an internecine conflict? If all poison-gas weapons (including, especially, those possessed by nearby Israel and the United States) had been removed from the conflict in Syria, would either side actually have been deprived of the means, or the motivations, to harm people whose only involvement in the contest was geographical? Would machine guns no longer kill them? Bombs? Artillery? Fire? Disease? Starvation? Fear itself? The bogusness of the “protection” excuse becomes stark in the light of such considerations.

In the truly global project of the last century entailing the extinction of the military, economic and social order of Germany in 1939-1945, the lethal measures against the Jews under German control are not even alleged to have begun until late 1941 at the earliest, about the time the United States formally entered the lists on the side against Germany. It was widely believed among the Germans, with some justification, that the massive opposition they faced from all the powerful countries in the world was mobilized by Jewish institutions and their agents, most of them also Jewish. In accordance with this belief, many Germans developed a profoundly hostile attitude toward even the innocent Jews who found themselves in the Germans’ midst, and understandably lashed out against these with a ferocity that would never have arisen were it not for the crushing “unconditional surrender” insisted upon by those very Jews’ purported rescuers. The destruction of Germany is said to have somehow “saved” millions of Jews from a deadly fate imputed to the Germans’ intentions, but it can be argued with at least as much force that the destruction killed millions of Jews, along with countless more millions both of utterly innocent German men, women and children, and uncounted millions more of non-Germans. Did the Germans kill the Jews who died? Or did the invasion and conquest sanctified by the drive to save them?

The armed power centers of the world (all “nations” in the present day) have many reasons to seek armed conflict with each other. All the real reasons are covert, unstated, and viciously misrepresented. None of the reasons, real or represented, is sufficient, and most of them are diametrically false, in that war will not only fail to advance the advertised justifications, but in fact will set them back.

The rescue of innocents—from poison gas or from any other of the hideous concomitants of armed conflict—is perhaps the very worst of these.