The Inconvenient History of the German Expellees

While still generally unheard of by the general public outside of Germany, it is a matter of little contention among historians that some 12 million ethnic Germans were expelled from Eastern Europe after World War Two. Some of these areas had been part of Germany, while in others, Germans had lived as ethnic minorities for generations. While the actual death toll that resulted from the expulsion remains uncertain and controversial, conservative figures are in the hundreds of thousands with some suggesting figures over 1 million.

The controversy of the German expellees received press earlier this year when the governing German coalition parties, the Christian Democratic Union, the Christian Social Union and the Free Democratic Party proposed a memorial day for the expellees. Almost immediately Jewish groups denounced the idea. Stephen Kramer, the general secretary of the Central Council of Jews in Germany called the proposal "a kind of retaliation" against the victims of German war crimes. A group of historians actually condemned the proposal as "revisionist." Others called the proposal a mockery and disgraceful. 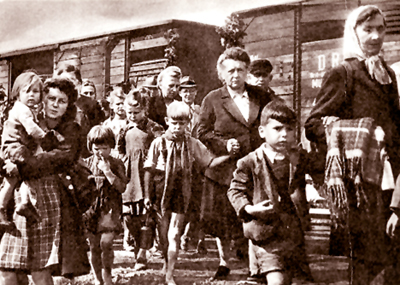 The explusion of the Sudeten Germans.

The German Expellees seem to have been banished to the same place as the victims of the Dresden terror-bombing and the victims of Hiroshima and Nagasaki. The mean-spirited logic seems to be that the victims of these various events should not be mourned and for that matter no sympathy should be expressed because their governments sponsored various war crimes. In the case of Hiroshima and Nagasaki, the argument typically includes the suggestion that many American lives would have been lost during an invasion of the Japanese mainland and that the atomic bombings hastened or brought about the complete surrender of the Japanese Armed Forces. Americans are rightly disturbed by the fact that the Japanese had already offered peace terms prior to the bombings and ultimately accepted much the same conditional terms after the bombings.

In the case of Nazi Germany emotions run even higher, though by no means among Americans generally. Holocaust historians and activists often minimize the numbers killed in Dresden in what can only be described as "denial." Historians who suggest higher figures for those murdered by the firestorm are often denounced as neo-Nazi, or as revisionists. James Bacque wrote two highly controversial books, Other Losses and Crimes and Mercies in which he describes an Allied policy of starvation that resulted in the deaths of millions. Both were widely denounced in major reviews. The topic however will not go away. Alfred M. De Zayas has written several books which address what he describes as "the ethnic cleansing of the east-European German." Another more recent title that addressed this subject was After the Reich by Giles MacDonogh which was reviewed in Inconvenient History Vol. 1, No. 1.

At a time when Holocaust museums and memorials continue to pop up all around the globe – most recently stories speak of a new museum in Rome and one on the Boardwalk in Atlantic City, New Jersey, it should be clear that the true lesson of the Holocaust story is misunderstood and has been misappropriated into one in which ethnicity and nationality override the universal problem. The Holocaust story as it exists today is one in which Jews are the only victims and Germans are the only perpetrators. While lip-service is given to the faceless "5 million others" the story is inherently one expressed in terms of the Jewish and German peoples.

The real message of the Holocaust is one about man's inhumanity to man. It is about individuals losing their most basic lives to the machinations of government ideologies, politics and warfare. It is about lives and families being destroyed by the utopian visions of some majority who holds power. We should all denounce the uprooting of families, enforced labor, and murder by whatever means.

Holocaust museums as they are designed and focused today tell a tale of a unique victim, a unique perpetrator, and a unique atrocity. But in that uniqueness the universal human message and moral is lost. Without mention of the victims of other mass expulsions and genocides, in the very same places and involving members of the same peoples at nearly the same times, from the American Indian to the Armenians to the Cambodians, Rwandans, and yes, even the Germans, the meaning is monopolized, hoarded, and likely lost.

While Jews and non-Jews alike advocate vigilance to prevent another Holocaust and that the events should never be forgotten, in what can only be described as naïveté, the focus remains on jack-booted SS-men and modern day neo-Nazis as if they would be the likely source of a future atrocity. In fact the very refusal to acknowledge the crimes perpetrated against the German people after World War II exemplifies how little we have learned.

If it can be agreed that millions of Jewish and German civilians were uprooted during forced expulsions and that many hundreds of thousands and perhaps even millions of each group died from various causes including official policy, disease and starvation, do we honestly believe that one of these groups should not be memorialized because they somehow "deserved it?" Is it not that very thinking, whose foundation is revenge and retaliation, that results in war crimes and dare I say it, holocausts?