The Influence of Air Power upon History

Walter J. Boyne is a retired U.S. Air Force colonel and command pilot, the author of thirty-six nonfiction works and five novels on the subject of airpower. Boyne strives to detail the history of airpower, and in turn the historical significance and decisiveness of combat aviation, from the Wright brothers to the Gulf War. He also includes an appendix at the end on the history of the military balloon from its use by the French Army in 1794 to the Zeppelins of the twentieth century. The book is a wonderful read and packs a lot of detail into its pages, attempting the challenging task of cataloging every decisive event in military aviation. Sometimes, in this reviewer’s opinion, Boyne is too quick to see his own military arm as crucial, and suffers from a standard military myopia in political affairs. Where Clemenceau once observed that war is too important to leave to the generals, Boyne would disagree and boldly assert that airpower, when properly applied, wins campaigns—though it is no match for political shortsightedness. Bomber Harris could not have agreed more. 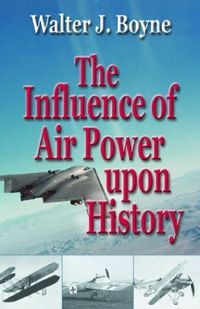 The most important concept is that airpower must win "command of the air." This is the function of fighter or pursuit aircraft. The nation or coalition that has aerial supremacy can then make the world its oyster. But airpower advocates have usually oversold their art and relied upon technical showmanship, promising politicians much more than could really be delivered. No expensive gunboats? No dirty trench warfare? Airpower’s barnstormers answered that they alone could win wars; but they rarely got the (staggering) resources from their governments needed to implement such panaceas. Even the history of the first French balloon corps showed that airpower relies upon an elaborate infrastructure of technically trained men and professional support staff as well as military commanders who understand the potentials and limitations of such new weapons. Military ballooning in the American Civil War saw wide-scale use, but it was never run on a professional military or scientific basis and simply collapsed into irrelevance.

The constant history of airpower is one of "airpower misapplied" by zealous adherents and misunderstanding politicians, according to Boyne, as well as one of exaggerated public perceptions. Long before the First World War the British public was seeing a phantom menace from German Zeppelins, much like the UFO sightings of later generations. Upon the outbreak of war, this led the First Lord of the Admiralty, Winston S. Churchill, to use the Royal Naval Air Service in the first strategic bombardments of history against German Zeppelin sheds in 1914, thus prompting the Kaiser to rescind his prohibition against using these fragile naval reconnaissance craft for bombing his royal cousins. Strategic bombardments by both sides in WWI were not decisive but they left enormous political implications. Airpower has a history of self-fulfilled prophecies. The Luftwaffe, for example, was perhaps at the height of its power before it ever engaged the enemy in combat. Germany’s formerly clandestine saber of national will rumbled overhead friendly crowds and awestruck foreign observers. The Guernica propaganda of Luftwaffe terror bombing from the Spanish Civil War inadvertently influenced Munich in Hitler’s favor, and so on, until the airpower torch was passed to the Allied bombardiers and the atomic age. The Allied "bomber mafia" continued to grope for the proper application of their craft, and upon success in WWII and preventing defeat on the ground in Korea, the wheel came full circle with the Vietnam War—the textbook case of the misapplication of airpower by politicians McNamara and Johnson, according to Boyne. Warriors are seldom diplomats and they have little appreciation for the use of their business to "send messages" to an enemy that nobody understands.

Boyne’s zeal and optimism for the future of airpower encourages one to hold fast to the principles he has outlined, as Mahan and his followers did earlier for sea power. Airpower is a jealous god, but so long as one respects the proper caveats it holds unfathomable promise. And Boyne really should have ended the book crisply on that optimistic note with the end of the Vietnam War; for the bedazzlement of airpower in the First Gulf War (and beyond) is a complicated subject for a quick glossing that almost undermines his earlier thesis. The unfortunate impression we are left with is that at last airpower is understood by military penny-pinchers and even inept politicians, who are more inclined than ever to speak loudly and wield the big airpower stick.

In this reviewer’s opinion, nothing could be further from the truth than the vindication of airpower. We understand the political and technological implications of laser-guided bombs today little better than the French peasants who attacked the first downed balloon with their pitchforks in the eighteenth century; or the German aviators of 1914, who punctually dropped grenades and leaflets over Paris calling for surrender from their dove-like motorized kites until this became an event for picnics—and even comedy, decades later with the "Five O’ Clock Charlie" character from the TV show M*A*S*H. We think that there are vast differences between those first killing grenades and multi-million dollar "smart bombs" delivered by jet or missile. Historically these are only applications of technology that are more alike than different and consistently misapplied by both military and political leaders. Airpower, like armies and navies, is only another Clausewitzean "continuation of policy by other means." But war is too important to be left to either politicians or generals. We cannot properly understand war without understanding politics and vice versa.

Nowadays we develop bunker-busting bombs with the same "Buy War Bonds" mentality from an imagined past that taught us that comic opera strongmen will naturally be found hiding from democracy under tons of reinforced concrete until their nations are completely blasted or they are themselves obliterated. What have we really learned? Have we learned that high-explosives will make the world safe for democracy? And once peasants collaterally (or deliberately) killed by airpower yearn to be freed from the reactive flexing of democracy-from-above, what good can sprout from the dragon’s teeth sown by our "phantoms from the sky"? As the present "War on Terror" spawns airpower panaceas no different than any other phase of history, perhaps Colonel Boyne will write another book addressing that.

I can highly recommend The Influence of Airpower upon History, but it is certainly not the last word on the application of airpower and its historical ramifications.