'The Jewish World' Against Pressac

As Journal readers know, Jean-Claude Pressac is a French pharmacist who has been used by the French "Nazi hunters" Serge and Beate Klarsfeld in their campaign against the Holocaust revisionists. Their relationship has been confirmed by Michael Berenbaum, Director of the Research Institute of the US Holocaust Memorial Museum in Washington, DC. In the 1994 book Anatomy ofthe Auschwitz Death Camp (p. xiii), Berenbaum writes: "Since 1982 the work of Mr. Pressac has been promoted and supported on a documentary, editorial and financial level by the Beate Klarsfeld Foundation ... " 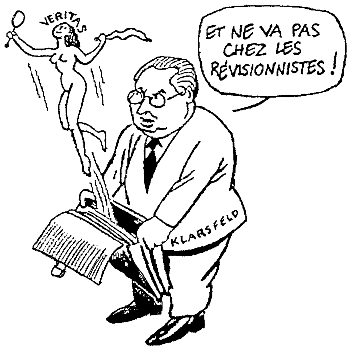 Commenting on the vitality of Holocaust revisionism in France – in spite of laws restricting free historical inquiry, vicious media attacks and even violence by Jewish terrorist groups – is this cartoon by "chard" in the French paper Rivarol, April 7, 1995. "And don't go to see the revisionists!," says French-Jewish anti-revisionist attorney and publisher Serge Klarsfeld to "truth," as she takes off on her own.

When Pressac's 21O-page book, Les Crématoires d'Auschwitz: la machinerie du meurtre de masse ("The Crematories of Auschwitz: The Machinery of Mass Killing") was published in 1993, leading newspapers and magazines around the world immediately praised it as the definitive response to revisionist arguments. For example, an Associated Press article that appeared in a number of American newspapers told readers that, according to "Holocaust experts," this book "will provide irrefutable proof to combat those who claim the Holocaust ... didn't happen." Similarly, Newsweek magazine called Pressac's work a "dramatic rebuttal" of revisionist views (Dec. 20, 1993), and noted that "Holocaust experts have hailed his work as definitive." (See the Jan.-Feb. 1994 Journal, p. 23, and the July-August 1994 Journal, pp. 28ff.)

For writing his Réponse, Faurisson was immediately dragged into court, found guilty, and sentenced. The dramatic high point of the trial was the cross-examination on May 9, 1995, of Pressac himself who had been subpoenaed as a witness by Faurisson. Unable to answer the questions put to him by defense attorney Eric Delcroix, Pressac collapsed on the witness stand. (See "French Court Fines Faurisson, Roques for 'Holocaust Denial' Book," Nov.-Dec. 1995 Journal, pp. 13-17).

Now Pressac seems to have been entirely abandoned by his former friends. In a recent issue of the leading French-Jewish intellectual journal, Le Monde juif ("The Jewish World"), published in Paris by the "Center for Contemporary Jewish Documentation," he comes under devastating criticism from Jewish scholar Maurice Cling. (Le Monde juif, Jan.-April 1996, pp. 192-196).

Commenting on just one page of Pressac's Les Crématoires d'Auschwitz, Cling uses these words: " ... doctored text ... does not give his source ... no source cited ... no source ... substitution ... no mention of any source ... dubious use of a text ... evidence of an indisputable literary talent ... concealment of sources ... distortion of the original text ... wild imaginings ... hypocrisy ... absurd affirmation."

Then comes the most serious accusation: Pressac is a disciple of Faurisson. Because Pressac once knew Faurisson, and allegedly "converted" from revisionism to anti-revisionism, he was therefore supposedly well-suited to refute revisionist arguments. In fact, says Faurisson, Pressac was never a revisionist. If there is one author whom Faurisson (unlike some revisionists) has never spared, it is the suburban pharmacist.