The Karski Report: the Holocaust in Miniature

This issue of Inconvenient History features an article by Friedrich Jansson that is appropriate to the Year 2014, designated by the Sejm (legislature) of Poland the Year of (Jan) Karski, the intrepid courier/witness for the London-based government-in-exile of Poland, born in Poland one hundred years ago. The article discloses, for the first time of which I, an occasional student of the matter, am aware, the tortuous experience of the reports rendered in December 1942 by Karski, whose effigies today grace parks and university campuses from New York to Jerusalem. Celebrated in a 1994 hagiography titled Karski: How One Man Tried to Stop the Holocaust, his exploits on one undercover mission into the heart of German-occupied Europe have, as delineated in Jansson’s masterful recapitulation, undergone a series of (partial) expungements and reconstructions that in their particulars and in their severity uncannily mimic the expungements and reconstructions that produced the Holocaust Narrative(s) with which everyone, at least who grew up in the West in the Twentieth Century, has been inculcated, with the usual result of entrenched, if unconsidered, belief in extensive untruths.

To rely upon the novel, but to me seemingly unchallengeable conclusions of Jansson’s article, Karski undertook a hazardous mission into German-occupied Europe in the service of his London- (non-Communist) Polish employers to garner material that might serve his employer’s purposes, which were both to oppose the present German occupation of Poland and to counter the efforts of a competing (Communist) entity in Moscow to gain international approval for their (ultimately successful) project of being recognized as the legitimate government of Poland. For this enterprise, Karski’s employers had decided, like the British with their Balfour Declaration and other such maneuvers, to capitalize on the global financial strength of international Jewry, and in pursuit of this part of their agenda, to assign Karski to penetrate not only the Warsaw Ghetto, but at least one “extermination camp.” Karski dutifully visited the Warsaw Ghetto (presumably no difficulty for him, as he had been supplied with papers identifying him as non-Jewish), and from there was directed to the “extermination camp” of Belzec, a small town 300Km to the southeast, where his contacts in the ghetto assured him he might witness an extermination camp in operation.

Karski (again, following Jansson and other reporters) went to Belzec, and there found no evidence of an extermination camp, but rather, a scene that closely fitted that of a transit camp.

And there, the problems arose. Karski, upon his return to London in November 1942, apparently first reported what he saw, though the accounts upon which we are forced to rely for that are, at the very least, interested. Interested in what? The answer is, several details, and one overriding concern: that the German occupiers be shown to be intent upon annihilation of the Jewish race, at least as it exists in Europe. And this concern required that Belzec in fact be the extermination camp that the anti-German party line insisted that it was, and not a mere transit camp from which inmates went forth to fates that could not be described with any degree of specificity, much less credibility. 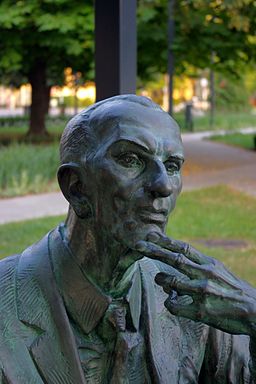 Jan Karski Bench in Warsaw at the Museum of the History of Polish Jews
Source: By Mateusz Opasiński (Own work) [CC-BY-SA-3.0 (http://creativecommons.org/licenses/by-sa/3.0)], via Wikimedia Commons

Concern about such matters was somewhat out-of-body for the Roman Catholic cadre that ran the London-based government-in-exile of Poland. But it was expedient—to a degree that bore on the success, the very life, of the group. This faction had to consider two potential deal-killers possibly residing in the hearts of Poles in Poland: sympathy for communism and hatred of the Jews. It had to choose between these predilections on the part of the modal Pole on the ground in the contested territory. It chose to side with the Jews, against the communists, a fact made ironic by the domination by Jews of the Communist regime that ultimately took over Poland after World War II.

Karski’s report, then, for all the horrific detail true, exaggerated, and false, that it contained, undermined this agenda more than it served it. So it was suppressed. The London Polish government issued a Note[1] to the Allies arrayed against National Socialist Germany dated December 10, 1942 in which it delineated all manner of genocidal atrocities against Jews by the enemies of said “government,” including, at Belzec, murder by electrocution of all (Jews) transported thence. The exigencies of propaganda and international (military) conflict are such that the particulars of Karski’s eyewitness account had to be suppressed, at least until this proclamation had its intended (immediate) effect, that is, the issuance of the Joint Declaration by Members of the United Nations of December 17, 1942[2], which claimed for the powers opposing Germany the divine purpose of protecting Europe’s Jews from the depredations upon them of which it accused National Socialist Germany, perhaps a reprise of the United States’s issuance of the Emancipation Proclamation at a similar point (about three years in) in the course of America’s War between the States.

After this critical event, Jansson’s account explains, parties hoping to gain from particulars—carefully selected and judiciously edited—of Karski’s intrepid exploits publicized their favored versions of where he went, when he went there, what he saw, and what he made of it, sometimes without his knowledge of what they were publicizing, at other times with his complicity in “shading” the occasional detail or interpretation thereof. Between his understandable desire to serve his employer’s—and his country’s, as he must have seen it—immediate needs and his own requirements for continued employment and regard, Karski’s own cooperation with the many campaigns of deception surrounding him seems more than understandable, particularly in the light of his subsequent utterances, whether calculated or careless, to set the record of what he saw straight.

What strikes me about this Saga of Karski is how the forces of interested, and sponsoring, parties’ imperatives interacted with Karski’s observations and his reports thereof, and with Karski’s own enduring self-interest and with the interests of the various media and entities that so-to-speak fed upon his testimony produced a narrative that, viewed over time through the lens so assiduously provided us by Jansson, squirmed and wriggled in a pattern that reveals the forces themselves and the agendas motivating those who applied those forces.

The sponsoring party, the London-based Republic of Poland, is long gone. Also gone is the Soviet-Union-sponsored Communist regime that controlled Poland until about 1990, replaced by one that has sought membership in the European Community and NATO. Very much with us today, however, is the sovereign promoter of international Jewry, Israel, and the compelling narrative defended by its advocates of the Holocaust. Also with us, if only in the nature of annoying gnats buzzing about our eyelashes, is the “corporal’s guard” of revisionists who have been advancing a cover story in fact invented by their dominant adversaries that Karski actually visited only a “sorting” camp at Izbica Lubelska, some distance from Belzec. Jansson’s account destroys this particular spin on Karski’s movements, dispositively.

But history, it would seem, is a football, as an object of contention between competing teams is aptly called, and just like the ball in a contest of what Americans call soccer, it is kicked back and forth, up and down, into goals, and outside them, by groups warring with all their might to make it go one way or another. The football analogy, however, is grossly deficient on at least one score, and that is the number of contending teams, and even the number of goals being sought in the contest. Originally, the contest in which Karski found himself caught up seemed to involve a mere three teams: the Communists, the non-Communist London government-in-exile, and the Germans, who held the ground in question. Over time, however (much more time than is involved in the usual football match), a group previously considered pawns in the game, the Jews, gained ascendancy by various means including the creation of the state of Israel, and it could be they, along with their massively powerful amen chorus in the United States, who have acquired the means to keep the game afoot, as it were, in the service of their own agendas and propagandistic desiderata.

Jansson’s article powerfully depicts the “football” nature of history in general, but in particular that portion of history that concerns itself with the experiences of the Jews of Europe during the time of territorial expansion that Germany undertook during its interval of National Socialism. And like the Karski football, the Holocaust football has been “all over the field” over its long and active life. Putting aside prewar adumbrations such as those cataloged in Don Heddesheimer’s 2005 The First Holocaust, the Note from the Republic of Poland cited above may have been the “kick-off” for the historical event that overshadows all others before or since, with the subsequent United Nations Declaration counting as the “extra point” (this analogy from American football).

The “launch” provided by the Note of December 10, despite styling its own details as “fully authenticated,” was wobbly enough. Larded throughout with phrases such as “As far as is known” and “It is reliably reported,” the Note details the specialization of the Belzec camp in murder by electrocution while assigning the use of poison gas to that at Chelmno. It takes one detail from Karski’s report and relates the use of corrosive chemicals on the floors of railcars to slowly and painfully kill the Jews forced to ride in said rolling torture chambers.

From there, the Holocaust was off on a merry chase that eventually revived the tired World War I canard of soap made from the fat of murdered Jews, lampshades made from human skin, and so on in a litany that is repeated (though critically) even in the pages of this very journal.

I have found it illuminating to project the patterns depicted in Friedrich Jansson’s article upon what I know, what I have heard, what I used to know, and what I now disbelieve, of the Holocaust.

It seems, upon due consideration, to be all of a piece. And by no means just as to the Holocaust.