The festivities opening the UNITED STATES HOLOCAUST MEMORIAL MUSEUM are in full swing. This is the final great do-or-die extravaganza of the Holocaust Lobby in the United States. It’s leadership will continue to work like beavers, or mice if you will, in getting Holocaust “studies” into the public school system. And they will have many small successes, but this is their last great hurrah.

In America, the charge of “genocide” the Lobby has leveled against the German people is going to stand or fall on the evidence displayed in this one building. It will either demonstrate the existence of homicidal gas chambers at Auschwitz or it won’t. My position is: no gas chambers, no “Holocaust.” If the museum fails in this one task, the USHMM will come to be seen as a 100-million dollar monument to fraud.

As if the Devil chose this week to have his little joke, the Roper Organization released a poll, commissioned by the American Jewish Committee, indicating that” A third of Americans are open to the possibility that the Holocaust… never happened.” This is the reward the Lobby has won after decades of blackballing and censoring and slandering revisionists and corrupting the spirit of the First Amendment.

David Cole and I are putting together a revisionist video catalog. The first issue will be out the end of May. Most of the listings will be for tapes that we have produced ourselves.

Thank-yous all around for your help with the photocopier. I did received the funds to pay it off. This time I actually used the money to pay for the copier, so you won’t have to hear it from me on this subject again.

The Cole/Piper video will be playing on cable “public access” television in—are you ready?—Manhattan, New York City. When? About the time you have this newsletter in your hands. Is that sweet? I’ll discuss the public access opportunities and pitfalls in these pages next issue. 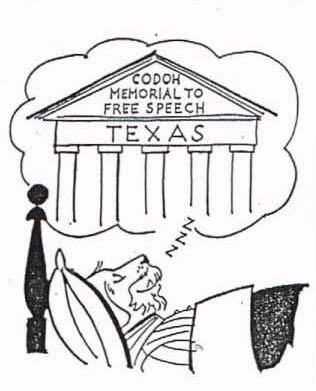 CONFESSIONS OF A HOLOCAUST REVISIONIST

The full second edition. Finished at last (almost) with about 600 manuscript pages. So close to finished that I’ve queried 21 New York City publishers to see if there’s any mainstream interest in the book. A two-page query letter, some press clippings, and one chapter titled “God Bless The Rabbis.”

It shames me to admit that after years of having this manuscript rejected (when it was much smaller and less brilliant) by every publisher under the sun, I once again feel the old enthusiasm that this time one of them is going to bite.

If, for your amusement, you’d like a look at “God Bless…,” I’ll send it along for the usual immense donation.

The Anti-Semitic Propaganda of Holocaust 'Revisionism' 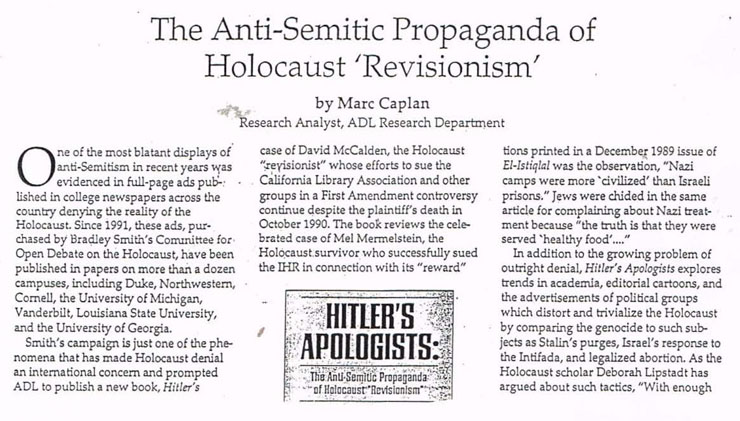 The same week I received this little valentine from the ADL, I was sent a clipping from the 5 April 93 issue of Resistance, the newsletter published by self-proclaimed Nazi and former (?) Ku Klux Klanner Harold Covington. In a column devoted to providing “movement” addresses to his readership, Covington writes, rather as an aside, “I have always found Bradley Smith to be an insufferable, conceited ass. He is also married to a Mexican [and] there is a limit, and race mixing is it with me.... “ Consequently, he refused to provide my mailing address to his readership. When the people who love to love Jews despise you, and those who love to despise Jews also despise you, it can be a real bother to be a revisionist activist. Sometimes it just makes you feel like everything you’re doing is wrong. (The article on “Hitler’s Apologists” ran in the February/March 1993 issue of the ADL’s On The Frontline. If you’d like to have the complete article I’ll send it along.)

When David McCalden died in 1990, he left a library of books, video and audio tapes, together with a number of boxes containing complete sets of his David McCalden Revisionist Newsletter. Recently, through the intervention of attorney Andrew Allen, who is handling McCalden’s estate, these materials came into our possession.

The video tapes are all original masters. They will be released by D & B Productions (David and me) in the coming months. A portion of the proceeds will be turned over to Andrew Allen for the McCalden’s estate. We are uncertain, however, what to do with the newsletters.

McCalden published his newsletter regularly for nearly a decade, beginning in 1980. Every issue reflected the breadth of his contacts among revisionists, his keen mind and his talent for research. The newsletters are an important, and in some instances the most thoroughly detailed, source of information about on-going revisionist research, personalities, controversies and court cases that affected the movement during the 1980s.

At the same time, the newsletter reflected McCalden’s own personality which, let’s say, could be difficult at times. Many of you are aware that there was an on-going conflict between McCalden and the Institute for Historical Review. My view is that McCalden was obsessed with that conflict. The newsletters contain attacks on IHR as an institution, and attacks on individuals associated with it that, while not all wrong about everything, must be described as sensational, vulgar, wrong-headed, and cruel.

Which brings us to a dilemma. On the one hand, the David McCalden Revisionist Newsletter is primary archival material, written by an insider, and should be available to revisionists and other investigators. On the other hand, if we offer the Newsletter for sale, it might open old wounds among revisionists and rekindle controversies long past which, while largely irrelevant, could prove to be very wounding to some.

We can: 1) destroy the newsletters 2) safeguard them and allow only selected people to see them 3) make the newsletters available to those who want to read them, for whatever reason, and give a portion of the proceeds to McCalden ‘s estate.

Because this is a dilemma that involves many in the revisionist community, we think it best to get community input into what we do before we do it. Should we make the David McCalden Revisionist Newsletter available to everyone, to a select few, or should we put it away for a while and let sleeping dogs lie? We’d like to know what you think about the issue. We’ll probably end by going along with whatever majority response we receive. What do you think? Let us hear from you. (Please—by letter or fax, not by telephone. Thanks.)

The Case For Open Debate

This article has been the single most effective revisionist outreach tool yet published. This is the one we ran as a full-page advertisement in university newspapers and has the ADL and the rest of the Holocaust Lobby so up in arms. It addresses “The Contemporary Issue,” “The Historical Issue,” “The Photographs,” “Documents,” “Eyewitness Testimony,” “Auschwitz, “ and “Political Correctness and Holocaust Revisionism,” which is a rather devastating critique of campus censorship. The leaflet contains the complete text of the original article. Help us distribute it, on campuses and off.

If you would like to see this text run in a college newspaper of your choice, and can contribute to the costs, please get in touch with me.

That flyer is no longer sold by CODOH. CHP did an updated flyer in 2004, which you can download her (in legal size).