*** A German court in the Bavarian city of Regensburg has thrown out the latest appeal by British Bishop Richard Williamson. The appeal marked the fifth round of court proceedings in this case.

The 73-year-old bishop was originally convicted of incitement to hatred after telling Swedish television in a 2009 broadcast that “200,000 to 300,000 Jews perished in Nazi concentration camps” and disputing the existence of Nazi gas chambers.

While still a member of a breakaway ultra-conservative Catholic fraternity, the Society of Saint Pius X Society. Williamson also hit the headlines in 2009 when Pope Benedict XVI reversed his excommunication in a bid to bridge a rift with that organization. Benedict later said he would not have made such a move if he had known about Williamson’s views on the Holocaust.

*** Siegfried Verbeke, who wrote here in SR 197 about growing up in Antwerp in a house beside an Orthodox Jewish Synagogue, sent me this photo of him and Vincent Reynouard (the relentless-in-the-face-of-all-obstacles) publisher of the quarterly Sans Concession. He had earlier sent me a photo of him and Reynouard on a French beach laughing and saluting the camera with beer bottles but I can’t find that one. He told me that, in fact, Vincent does not drink. Siegfried’s doctor has told him he should not drink because of health issues, his wife has told him the same, but Siegfried tells me that he will leave such matters to “Fate.” 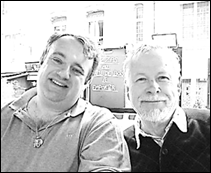 Siegfried suggests I add a note to the effect that both he and Vincent are disposed to being “gassed” by Zyklon B. He reminds me that a few years ago he, Siegfried, volunteered himself as such a victim to the “One Million Dollar” challenge proffered by the James Randi Educational Center (JREF). After a lot of fiddling around, the “One Million Dollar” challenge fell through.

And he mentions the fact that Vincent too, in a different circumstance, offered to be gassed by Zyklon B. This is one I did not know about. Siegfried says that Vincent put a couple specific conditions to his participation, one being that the “challenger” would have to agree to be the one who would drag Vincent’s dead body out of the chamber if he were to die.

Siegfried comments: “Vincent is a clever guy – Have a nice day, Bradley.”

*** A Zen lyric from a group I never heard of, on the radio at a local sandwich shop. “I only miss you when I’m breathing.” Some kid probably wrote it. Brilliant! It tells me something that I will try to tell you here next issue.