The Library of Congress Has Holocaust-Denial Books!

Evidently, the hard-earned tax dollars of United States taxpayers are being expended to purchase and make available to America’s reading public, books that Yad Vashem and others have exposed to be Holocaust-denial books! Lately, we’ve heard the hue and cry that Amazon is peddling books advocating Holocaust denial (and would Amazon kindly remove such material from their offerings?). So I consulted the catalog of the Nation’s Own library in Washington, DC, and lo and behold, the cancer is there too, and long since by the looks of it! 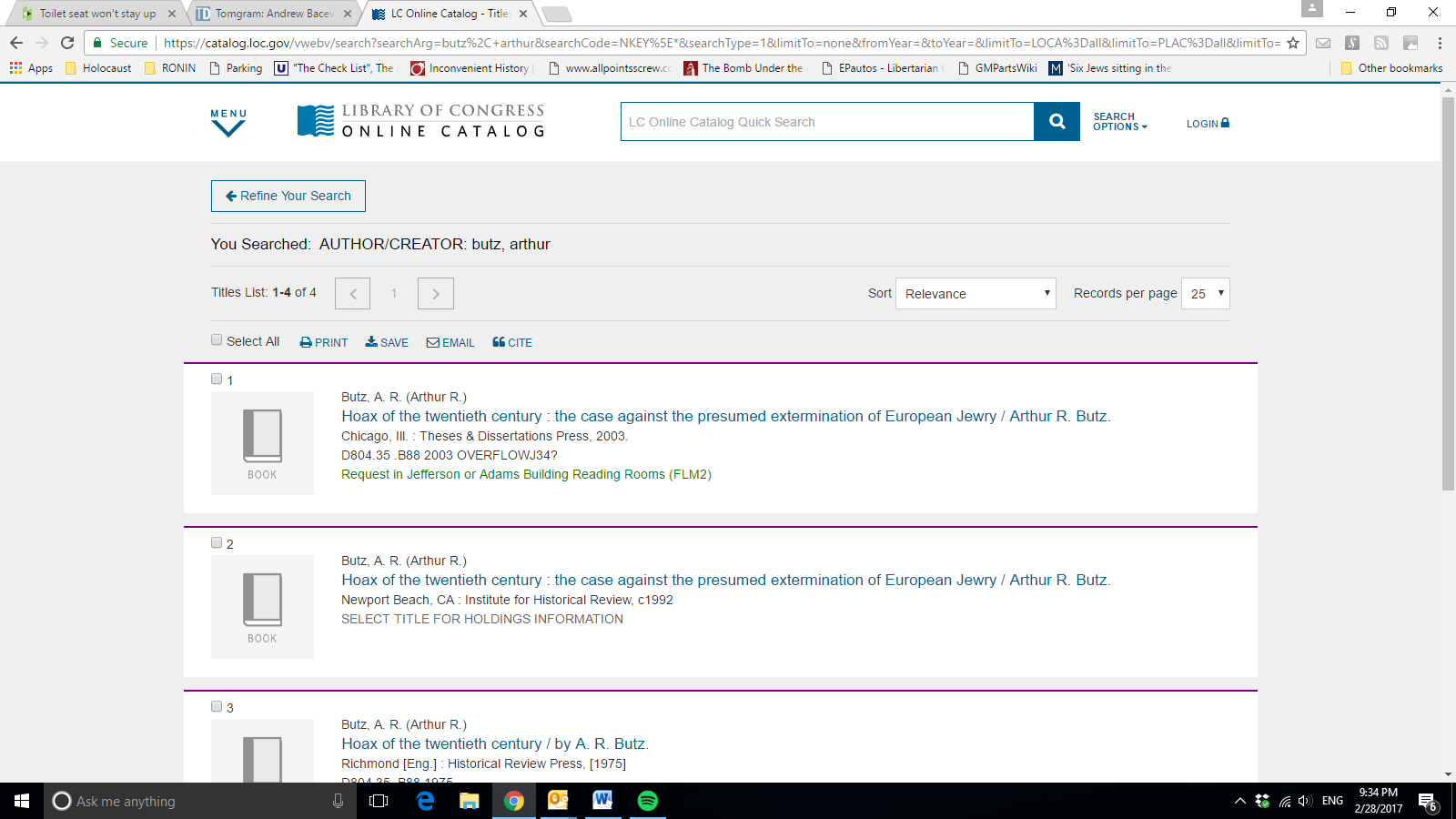 It’s bad enough, isn’t it, that Amazon should include in its catalog books that some people are willing to write and others to buy, that third parties fear might erode the predominance of their preferred account of the Holocaust, but that the Library of Congress, the very fount to which studious federal legislators repair as they decide how to vote on matters of critical importance to the nation, should permit the infiltration into its hallowed shelves such scurrilous distortions of history as Arthur Butz’s The Hoax of the Twentieth Century is enough to make any American’s blood run cold.

Perhaps such Forbidden Texts, as in Brave New World, are limited to access only by the nation’s trusted leaders, deemed to be immune to the blandishments of such fakirs as Butz and a legion of other scalawags wearing brands such as anti-Semitic and/or Neo-Nazi. But, no! Anyone, at least who has an address in the United States, may borrow from the LC through interlibrary loan. We remain, as yet, at least this far removed from the dystopia of Brave New World, at least insofar as printed material is concerned, itself an ever-shrinking influence upon the opinions of the populace at large.

Germany has long (at least since World War II) had an indexing system under which books whose import is deemed unacceptable to government authorities are banned not only from sale by booksellers such as Amazon, but likewise barred from shelving in libraries, including, presumably, Germany’s Library of Congress, if it even has any such institution. The German government, of course, routinely orders the machicolation, burning, or other suitable destruction of copies of indexed books improperly distributed or acquired prior to their being indexed (such things are hard for a limited government staff to keep up with, obviously).

If Amazon is to be persuaded or forced to stop distributing such material, how is it, then, that such material may be had from the Nation’s Own central library? Logically, any such campaign must be extended to exclude such material from the body that is made available to our own government for consultation in the cogitation of its own activities.

Perhaps there is a middle ground in this contretemps. Perhaps persons wishing to consult the Forbidden Texts might be required to provide identification before they are allowed to do so. Somewhat as persons wishing to fly on a commercial airline flight are now required to do, or open a bank account, or do many things that were once, not long ago, permissible for people who didn’t identify themselves in any way. That would certainly fit in with the temper of the times.