The Most Successful Campus Outreach Ever Mounted

During the academic year just ended the $250K ad challenging the ADL to debate CODOH on national television has appeared in a record ninety-one student newspapers from coast to coast. We’ve never before reached such a broad base of students and faculty in one academic year.

As noted here before, it is ever more evident that student journalists and their advisors are increasingly willing to stand with the ideals of a free press in the face of bitter attacks from faculty, special interest groups both on and off campus, as well as the chancellors and presidents of their universities and colleges.

One of the great successes of the ad appeared in newspapers on campus after campus where the issue of revisionist theory had never before been raised. Hundreds of thousands of students and faculty and their administrations—upwards of three-quarters of a million individuals in higher education—were introduced to the great struggle between those who argue that intellectual freedom is for everyone, and those who argue that it is for everyone who believes in the Holocaust story but not for those who do not.

Shown below is the introduction (only) of our 20-column-inch $250K advertisement, which has run in student newspapers at a record 72(!) campuses around the country during the 1998-1999 academic year. It began in the early fall with the editorial staffs of the Georgia State Signal. University of Wisconsin-Oshkosh Advance-Titan and the University of Indiana-South Bend Preface. As winter approached the staffs at the Daily Kent Stater. Marquette University Tribune (Milwaukee), the Cardinal at State University of New York (SUNY)-Plattsburgh and the Broadside at George Mason University joined in the struggle against the defenders of censorship and mediocrity to run the $250K ad and to defend their running it.

By the time the winter break was over I was literally overwhelmed with the number of editors and ad reps I had to deal with, all the back and forth, and the record keeping (I think the ad has run in more than ninety papers, maybe upwards of one hundred, but in some cases it has been difficult to get tear sheets).

The Texas Christian University Skiff and The Logos at University of the Incarnate Word (San Antonio) come to mind among many others for their professionalism. both are in Texas, both Christian campuses. and because of the behavior of the President of UIW.

According to an AP story in the Dallas Morning News (28 March), the morning after the $250K ad appeared in Logos, UIW president Louis Agnese Jr. "sent a letter to the Jewish Federation of San Antonio and others (and others?) to say he was sorry.”

“While the student editor expressed her disagreement with the concepts contained in the ad. included a disclaimer with it, and explained why she chose to print it. the decision was clearly wrong," he wrote. “The entire community of the University of the Incarnate Word is deeply sorry.”

Mark Freedman, executive director of the JF of San Antonio, w as pleased as punch by Agnese’s swift response. It was “a very important and assertive (sic) step for him to take, based on the fact the university as an institution was not involved in the decision to run the ad in the paper. That was a decision by the editor of the paper.”

The article then noted casually that since the ad was published. Logos was flooded with letters and “the editor has received death threats.” Mr. Freedman was not quoted on how he felt about those assertive acts. I tried to contact the editor of Logos but she “was not taking telephone calls." Once you've heard one death threat, you've heard ‘em all. I speak from experience.

You never know where a story will develop, or where you will find young men and women with iron in their backbones. I was not going to run the $250K ad in the Connecticut College Voice, for example. I discovered that student enrollment at Connecticut College (New London) numbered only 1,615, and that there was only 156 in the faculty. I doubled it would be worth my time or my money to reach less than 2.000 students and faculty.

I didn’t know then that Connecticut College is one of the top twenty-five liberal arts colleges in America. I didn't know it had a chair of Holocaust studies named in honor of Elie Wiesel. I didn’t know there was a tight-knit, integrated, Christian-Jewish religious community in New London. Neither did my primary sponsor for this campaign. Nevertheless, she said. “If they want to run it. let ’em run it.” What the devil, eh? 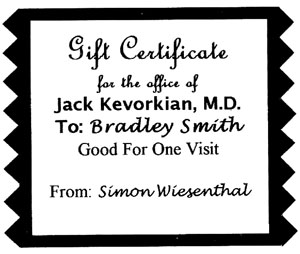 Reduced copy of a certificate received by Smith from an anonymous admirer of CODOHWeb. Smith says, “This is my kind of humor”.

What ensued was one of the most revealing and longest running dialogues to take place in reaction to the appearance of the $250K ad during the entire academic year. Over a period of six weeks the Voice and its staff were attacked by the president of the college, two college chaplains, a New London associating of preachers and rabbis, professors, a spokesman for the ADL, students (one named “Dershowitz”—is it possible...?). and the Elie Wiesel Professor of Judaic Studies.

The Voice staffers were not dismayed. Co-editor in chief Brian Bieluch. wrote two sterling free press editorials. A staffer wrote a fine opinion piece challenging the president of the College—she is just “Wrong.” And the Voice printed a five-hundred-word letter to the editor by Smith taking on all the censorious culprits who had attacked the Voice staff for standing with the ideal of a free press.

The Voice then ran a long article reprinted from a 1994 special supplement to The Skidmore University News. An agent from the Connecticut College Hillel was kind enough to draw it to the attention of the Voice editors. Written by a professor Robert Boyars, it was originally a response to the CODOH ad run in the News challenging the authenticity of the “gas chamber” displays at the U.S. Holocaust Memorial Museum. The article gives the appearance, to those who are not familiar with the subject, of challenging the language in that ad. And. finally, I sent a press release to the editors of all the student and city papers in Connecticut, along with the heads of their communications/journalism departments, informing them of the debate that was taking place at CC. and giving them the address our Internet site. CODOHWeb, where they could find some real information about revisionism and the other side of the Jewish holocaust story.

[If you would like to see all the back and forth that went on in the CC Voice, and it’s more than interesting I’ll send it along in return for your contribution. Please mention the “CC Voice.” There will be 20-plus pages of editorials, letters, and opinion pieces.]