The Orthodox Holocaust Narrative as a Conspiracy Theory

Long branded as crackpot or “anti-Semitic,” Holocaust revisionism is increasingly dismissed by its adversaries, including such worthies as the U.S. Holocaust Memorial Museum, Wikipedia, and Time magazine, as a “conspiracy theory.” The authors of Révisionnisme contre complotisme (Revisionism vs. Conspiracism) and Notes sur l’extermino-complotisme et le révisionnisme (Notes on Extermino-conspiracism and Revisionism) address this accusation head-on. The first, Rémi Perron, takes the conspiracy bull by the horns, to show that it is the Holocaust exterminationists who rely on conspiracy scenarios in defiance of the evidence. In Notes sur l’extermino-complotisme, François Fradin also surveys the exterminationists’ dependence on conspiratorial fantasies, but his chief focus is on the conspiracy theories of certain revisionist writers on the supposed Holocaust. 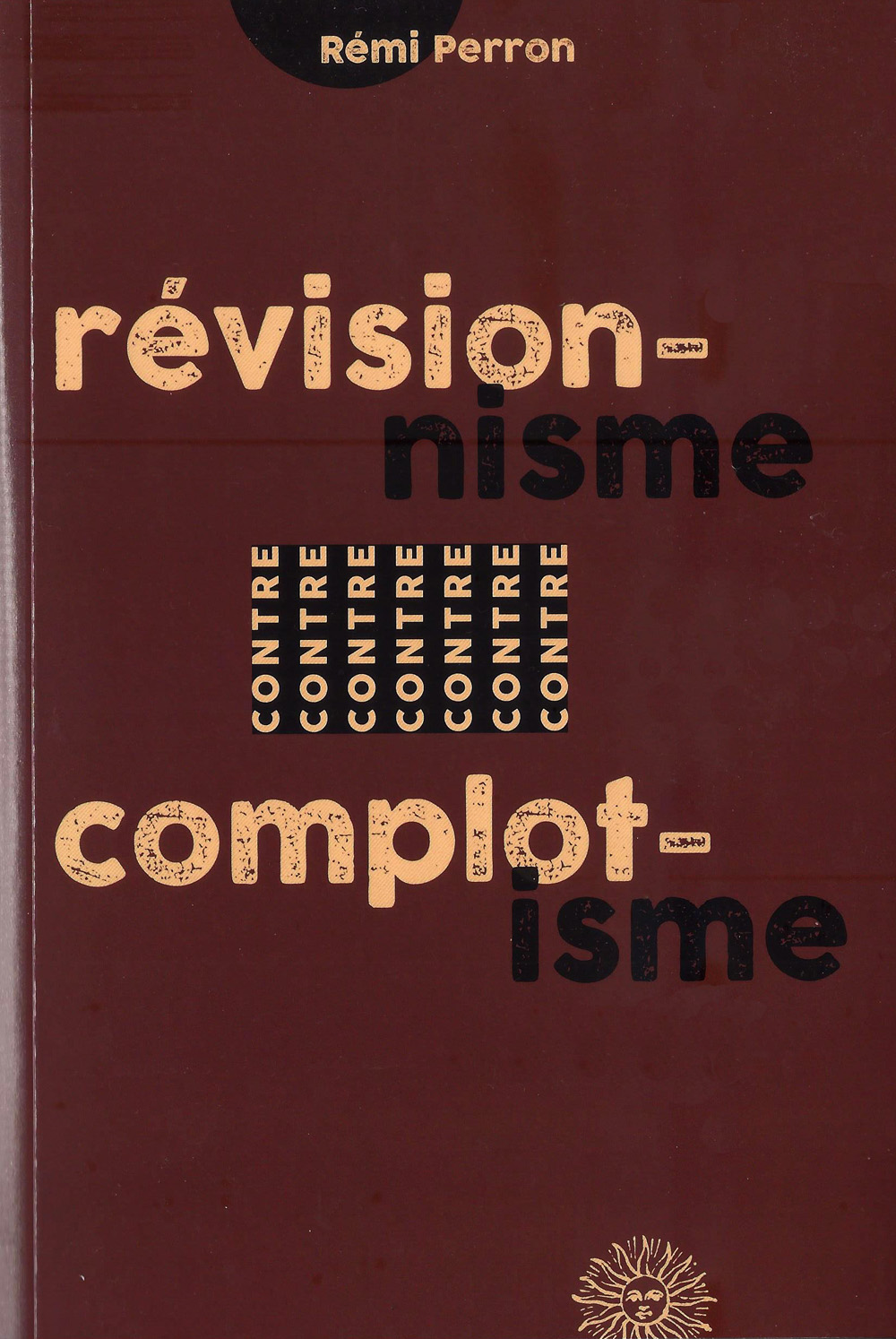 This book can be purchased at the French publisher's website

Both books dismiss what they call “conspiracism.” Perron defines conspiracism as the belief in “the existence of a conspiracy on the basis of invalid arguments (sophistries, bias) and/or claims to establish the evidence through an unscientific method” (Révisionnisme, 11). At the same time, Perron and Fradin accept that there are real conspiracies as well as imaginary ones.

The word “conspiracy” once designated a treasonous plot against the ruling order; in English law and its derivatives, “conspiracy” continues to be used to denote (single or related) crimes committed by more than one person consciously working together. Several decades ago, by dint of the efforts of government, academy, and media, the onus of conspiracy moved from conspirators, real and imagined, to those who impute conspiracies to powerful forces, often the state or supranational organizations. The odium and ridicule employed against conspiratorialists to bolster establishment interests has been such that the average person would rather be accused of conspiring than believing in conspiracies. This despite the fact that in the English-speaking countries, especially the United States, trying alleged conspirators occupies prosecutors on a daily basis.

Conspiracism is of course generally associated with the political right. Nonetheless, most persons continue to believe in conspiracies—they simply don’t call them that. In this country the left side of the political spectrum frequently strives to strip off a false veneer of civility and decency that, to them, conceals an entrenched, grasping, brutal, and nearly always WASP power structure, as depicted in a raft of hard-boiled private-eye novels, exposés of the hidden WASP power structure of communities and institutions by academia and the press, all the way (for left conspiratorialists) to the assassinations of JFK and Martin Luther King, corporate misdeeds real and imagined, and today’s “white privilege.”

The more populist-minded subscribe to a myriad of theories that also involve corporate conspirators, from the widespread belief that the rise in gasoline prices following the OPEC oil embargo of the early 1970s was actually a plot by the big oil companies, to numerous claims that corporations conspired to eliminate their competitors, from the demise of the Tucker automobile to the disappearance of Los Angeles trolley lines. And no survey of conspiracy mongers would be complete without left-liberal, predominantly Jewish “watchdog” groups, such as the Southern Poverty Law Center and the ADL, which labor to find “links and ties” between conservative and nationalist groups and more-radical quarry, reprising the efforts of “red hunters” of an earlier era to expose the network of fellow travelers, undercover agents, et al. in the (rather more-menacing) communist conspiracy.

Thus, it is satisfying to follow Perron and Fradin as they redress the balance by refuting the claims of a hidebound establishment that Holocaust revisionism is a baseless conspiracy, at the same time that they convincingly pin the conspiratorialist label on the accusers. Perron opens his examination by briefly surveying contemporary and classic authors on the usual source of conspiracy theory in rumor during troubled times. Perron lays his groundwork on the findings of modern theorists Pierre-André Taguieff, Jean-Noël Kapferer, and Gérald Bronner on the rise of rumors and the types of the circumstances in which they arise, take root, and spread. He moves closer to his quarry with post-WWI analyses by historians Albert Dauzat and Marc Bloch of the establishment manufacture of atrocity stories from wartime rumors.

Before moving to expose and analyze the exterminationists’ conspiratorial thinking on the Holocaust, Rémi Perron reminds us how often they invoke fictive conspiracies to explain events in National Socialist Germany separate from the Holocaust. He runs through the conspiracy theories that various establishment savants have brought to Hitler’s 1923 Munich putsch; the 1933 Reichstag fire; the 1934 Night of the Long Knives; the 1938 Crystal Night riots against the Jews; and of course the conspiratorial certitude that Hitler was merely the puppet of international financial interests. Indeed, it should be pointed out that these conspiracy theories merely echo Count One of the Allied indictment at Nuremberg, according to which virtually everything involving National Socialism between 1921, when Hitler became leader of the NSDAP, to the end of the war was the result of a Nazi conspiracy—including a nefarious plot “to undermine and overthrow the German Government by ‘legal’ means.” (http://avalon.law.yale.edu/imt/count1.asp)

It is the authors’ novel approach to analyzing the fatal defects of exterminationism that gives these books’ unique value. Perron and Fradin first establish that the exterminationists treat the Holocaust as if it were the result of a conspiracy: an evil deed planned by the German leadership and carried out by their henchmen in great secrecy. Next, rather than deconstruct the arguments of Holocaust exterminationism chronologically or by individual issue, e.g., the Wannsee Conference or the functioning of the “gas chambers,” Perron identifies numerous different fallacies in logic and scientific method that underlie exterminationist argumentation. He further illustrates (as does Fradin in a more abbreviated manner) how exterminationist writers, despite their indictment of the revisionists as conspiratorialists, rely on such fallacies in the same way JFK and 9/11 buffs do in their conspiratorialist constructs. 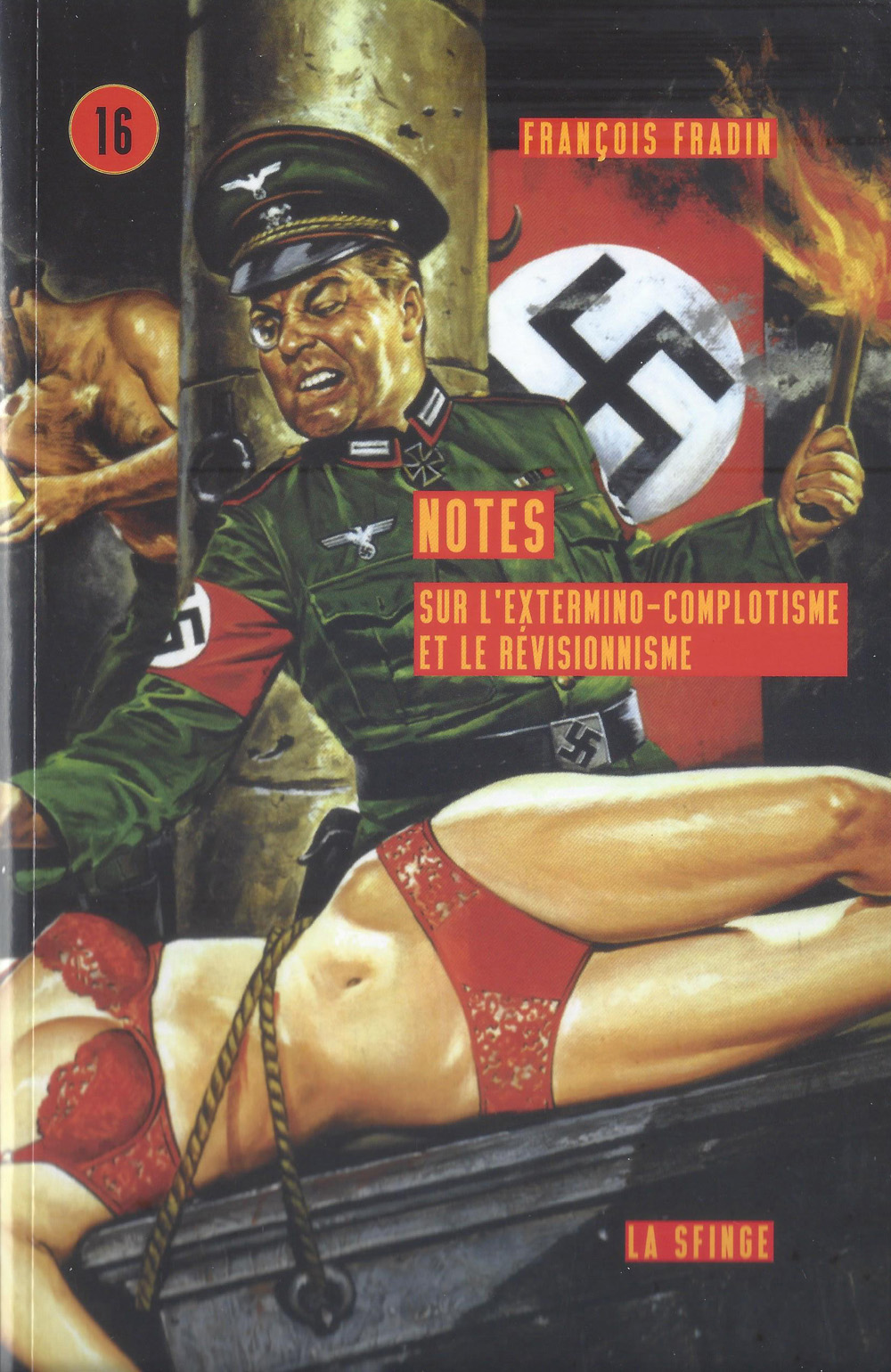 This book can be purchased at the French publisher's website

Several of the fallacies considered by Perron spring from an a priori certitude in the Holocaust. Abductive reasoning, by which the conclusion precedes the investigation, plays a central role in the exterminationists’ methods: not only is the Holocaust beyond question, but its individual components are as well. Related, though subsidiary, is the belief that the absence of evidence (documents, gas chambers, human remains, etc.) goes only to show the perpetrators’ fiendish cunning in destroying all traces of that evidence. Then, of course, there is the claim that the Germans often repeatedly used innocent-sounding words in documents as code for sinister wartime Jewish measures against the Jews. The ability to designate some words as coded, and then interpret them according to external standards, is closely linked to confirmation bias, a fallacy of the exterminationists that skews their investigation of the historical evidence to accord with their Holocaust certitude.

Perron shows how exterminationist historians such as Walter Laqueur posit that Hitler prophesied the extermination of the Jews to the world, then veiled it in total secrecy—just one example of the failure of internal coherence that marks Laqueur and other exterminationists’ method. He also points out how they cut themselves on Ockham’s razor, the fourteenth-century English Franciscan’s maxim that could be translated “keep it simple, stupid”: to name just one transgression, their disregard of the documentation of German Jewish policy in favor of an undocumented (or coded) extermination policy they have invented.

Perron gives due attention to more exterminationist fallacies: the Germanophobia underlying rumored atrocities and consequent Allied propaganda; the practice of attempting to intimidate by a multiplicity of irrelevant arguments; cui bono, or attributing guilt to a party that allegedly benefits from a crime; and ignoring evident facts in favor of one-sided, posthumous psychologizing of the German leaders.

The reader may ask, does either writer consider the Holocaust allegation, as developed and defended, a conspiracy theory? Each is at best coy regarding this question. The founders of Holocaust revisionist scholarship have avoided casting the alleged Holocaust as the result of a conspiracy. Arthur Butz uses the word eight times in The Hoax of the Twentieth Century, each time in a context other than the Holocaust. Despite the massive academic, political, and judicial forces that have been deployed against him for forty years, Robert Faurisson doesn’t characterize the obligatory (in his country) version of the Holocaust as a conspiracy theory.

François Fradin’s study makes clear that these and other leading revisionists do not resort to the arguments and methods of conspiratorialists. He chides some twenty other revisionists, mostly of the second tier, for conspiracism. Nearly all of them are publicists rather than scholars, and Fradin tends to fault them not so much for applying conspiracy theory to the Holocaust claims as for subscribing to the JFK, 9/11, and other alleged conspiracies. His mentions of them are often brief, and perhaps more admonitory than categorical.

Nonetheless Fradin’s attention to conspiracy thinking among revisionists is worthy. There’s a reason, after all, that our adversaries have tried tar Holocaust revisionism with the conspiracy brush: crying conspiracy is a hindrance in outreach to new audiences. Instead, presenting their position as anticonspiracy and discreetly policing it, while attacking the other for conspiracy thinking, is surely the way to go.

Révisionnisme contre complotisme and Notes sur l’extermino-complotisme et le révisionnisme are written in a French that non-Francophone readers with two or three years study of the language shouldn’t find too dense. Each has a bibliography and an index, and is attractively bound. Both are timely as well as instructive, and make for pleasurable reading as well.