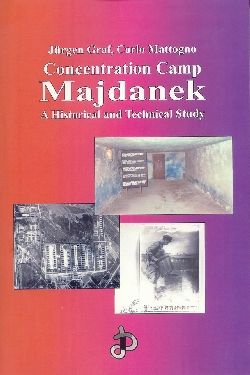 The German concentration camp commonly known as Majdanek has long had a conflicted identity among students of the alleged Holocaust. It goes by two names, the official German "Konzentrationslager Lublin" (after the Polish city in which it was situated), as well as the more familiar Polish designation, derived from the nearby Majdan Tatarski quarter of Lublin.

In the standard Allied version of the war, Majdanek was first viewed as an extermination camp with some facilities for labor, but later as a labor camp with some facilities for extermination. According to the specifics of the extermination legend for Majdanek, large numbers of Jews were dispatched there by shooting as well as gassing; as for gassing, the official story maintains that victims were killed by Zyklon B, supposedly typical of Auschwitz, and by carbon monoxide, the alleged killing agent at Treblinka, Sobibor, and Belzec.

Easily the most acute of Majdanek’s identity problems, however, is the great disparity between Majdanek’s lurid reputation in the first months and years after its capture by the Red Army in late July 1944, and the oblivion into which the camp’s memory has subsequently declined. Majdanek was the first big camp to fall into Allied hands, and the initial Soviet propaganda – obediently parroted by the New York Times and other Western media – described the place as a vast extermination center, with 1.5 million victims, in other words about as many as are supposed to have been killed at Treblinka, Sobibor, and Belzec combined. Today, however, Majdanek has been all but forgotten in the West, an afterthought even to "exterminationist" scholars. These historians have pared down the camp’s grandiose death toll 80 to 90 percent below the original claims, with alleged deaths from gassing now generally estimated by Holocaust partisans as fewer than one hundred thousand.

Knowledgeable revisionists will note that as regards extermination claims, Majdanek is a precursor of Auschwitz, which fell to the Soviets six months after the Lublin camp. As with Auschwitz, the crematoria and delousing chambers were said to have been employed to exterminate great numbers of Jews; the Red propagandists put photos of the cans that had contained the pesticide used for delousing to good use; and even the heaps of shoes (800,000 in all) and clothing found at Majdanek were utilized, Auschwitz-style, as proof of mass murder.

All of this prompts at least two questions: Why has Majdanek largely faded from Holocaust "memory," while Auschwitz, though buffeted in recent decades by the force of revisionist inquiry, still retains its prestige? And, more concretely, how does the evidence (or lack of it) for homicidal gassings and disposal of great numbers of corpses in the crematoria at Majdanek differ from the evidence for the same at Auschwitz?

Jürgen Graf and Carlo Mattogno’s recent Concentration Camp Majdanek: A Historical and Technical Study does a superb job of evaluating the evidence for mass murder by gassing and cremation at Majdanek. The authors, working from wartime documents, the considerable postwar Polish literature on the camp, and the large body of knowledge they have assimilated over years of research, concentrate on establishing Majdanek’s general history, the number and origin of its inmates, its mortality figures, the workings of its crematoria and delousing chambers, and the evidence for mass killings at the camp, whether by gassing or shooting, as well as the conduct and findings of the postwar trials. Their careful survey of the key issues of the Holocaust as they relate to Majdanek corrects previous errors of revisionists and by establishment researchers, and turns up much useful information on the camp’s history, as well as valuable pointers for the comparative history of the camps.

Graf and Mattogno make no attempt to defend Majdanek. The first line of their concluding page reads: "The concentration camp Majdanek was a place of suffering."

They are able to show that many thousands died from inadequate sanitation at the camp throughout its history (the authors note that, thanks to obstructionism on the part of local occupation authorities, it took months to link Majdanek to the city of Lublin’s sewer facilities). An unknown number of prisoners, most of them evidently Polish resistants, were executed in the camp.

While the authors’ sobriety (and, dare it be said, a tiny dash of schoolmasterly pedantry on their part) generally militates against their making sweeping generalizations or drawing comparisons of the Majdanek vs. Auschwitz type, such is their industry that Concentration Camp Majdanek contains a trove of data capable of wider applications. Students of the problem of the origin of the gassing rumors and the countervailing problem of the absence of gassing reports (first raised by Butz about Auschwitz) will find Graf’s and Mattogno’s studies of the ease illuminating, with which information could pass covertly to and from Majdanek, as they will the authors’ careful survey of the scattered reports of homicidal gas chambers that appeared in publications of the Polish government-in-exile. In fact, Majdanek held less economic interest for U.S. and Britain and was a much more remote target for their reconnaissance flights than Auschwitz, and may well have been easier to glean information from for Polish resistance groups.

The authors are diligent in demonstrating that the most tangible evidence to show that anyone was ever killed by lethal gas at Majdanek is the wartime reportage of the Polish government in London – and that this evidence is utterly insubstantial. As they establish beyond cavil, none of the documents that survives from the camp refers to homicidal gassing, nor do the Zyklon cans, delousing chambers, and crematoria, which the Soviets captured intact, provide proof of a single homicidal gassing at Majdanek (in an aside (p. 159) Carlo Mattogno, responsible for most of the technical writing in this book, does not categorically exclude the theoretical possibility that someone could have been gassed in one of the delousing chambers). Indeed, compared to the alleged machinery of mass destruction at Majdanek, Saddam Hussein’s non-existent arsenal of nuclear, biological, and chemical weapons was positively imposing: The Germans’ supposed extermination weapons existed and were used precisely to preserve lives, and the lives of their prisoners at that. 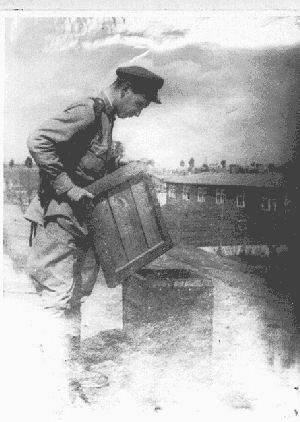 Soviet soldier on the roof of the hygienic building in Majdanek. The Russian caption states: "Opening through which the substance ‘Zyklon’ was poured into the gas chamber." In fact it was one of the two ventilation shafts of the "Drying Facility".

To show that Majdanek was not a poison gas "killing center," Concentration Camp Majdanek offers several meaty chapters on the delousing chambers, the crematoria, and the Zyklon B. These small studies alone would be worth the price of the book. The chapter on the delousing chambers is a careful account of when, how, and why they were built, with a critical examination of previous studies of their function by official theorists and revisionists (the work of Fred Leuchter and Germar Rudolf comes in for some perhaps overly harsh criticism here). The chapter-length essay on the workings of crematory ovens is one of the most lucid treatments this reviewer has seen, and, as is typical of the very best sort of scholarly work, of general use in evaluating Holocaust claims. Finally, a chapter analyzing the evidence and postwar Polish literature on the delivery of Zyklon B to Majdanek concludes, just as the reader’s eyes are about to glaze over from German procurement procedures and exterminationist claptrap, with the springing of this revisionist trap:

The authors have carefully studied the available records of the size of Majdanek’s inmate population and the death toll there. Their heroic efforts at calculating these, in light of the gaps in the documentary record, have enabled them to conjecture that something like 42,200 human beings perished at the grim camp, or about 3 percent of the losses trumpeted by the Communists and their helpers sixty years ago. Mattogno and Graf also estimate the total inmate population of Majdanek at a surprisingly low 109,000. They would be the first to welcome improved findings here, but their work here leaves little doubt that their figures are more trustworthy than those of the other side.

As noted above, Graf and Mattogno’s straight-ahead research style doesn’t leave much room for imaginative excursions – but even so, careful revisionist readers will note that Concentration Camp Majdanek entertains more evidence and allows more likelihood for gassings at Majdanek than at Auschwitz (which is very bad news for supporters of the Auschwitz myth). The book’s careful investigation of the claim that many thousands of Jews were shot at Majdanek (Operation "Harvest Festival") points ahead to future controversies over the extent and purpose of mass shootings on the Eastern Front.

Even in its small revelations and refutations, the book often delights, as when it dispenses with the claim that the sick were routinely killed off, or when it shows why the great piles of shoes may mean something else than mass murder.

Concentration Camp Majdanek is not an exercise in apologetics (and perhaps because of that has produced much new knowledge). The subject matter of this book is often far from pleasant, but nonetheless it is often pleasurable to read such forceful intelligence arrayed on behalf of our cause: freely working toward the truth. It is a book that should of course be in every research library in America, and just as certainly won’t be.

Nonetheless, the continuing publication of books such as Concentration Camp Majdanek is the life blood of Holocaust revisionism, without which it would soon atrophy into reportage and debate. Theses & Dissertations Press, and in particular its proprietor Germar Rudolf, are to be congratulated for their work in bringing it out in this substantial and well-designed paperback edition.

Concentration Camp Majdanek includes more than fifty pages of maps, original documents, and photographs of the relevant camp installations. Its five-page bibliography runs to eighty-two works in five languages. Although there remains room for improvement in copyediting and proofreading, Viktor Diodon’s translation is quite good, with a few questionable renderings of foreign titles but never a major lapse to distract or confuse the reader, a major achievement in a historical and technical study of over three hundred pages.