The Sleight-of-Hand of Simon Wiesenthal: "Falso in Uno, Falso in Omnibus"

For many years Simon Wiesenthal has made a highly successful career for himself as the world's foremost "Nazi hunter." The American mass media have elevated him to secular sainthood and the U.S. Congress awarded him a special gold medal.

In reality Wiesenthal is a proven liar. The most infamous example was his charge that an elderly Polish refugee living in Chicago, Frank Walus, was a Gestapo official responsible for killing Jews during the Second World War. Only a long and costly court battle by an unusually tenacious attorney saved Walus from almost certain death. The government prosecutors were forced to drop their case ignominiously. The popular Chicago Weekly Reader and the highly respected Chicago Lawyer published devastating exposés of Wiesenthal's role in the frame-up of Walus. Eventually even the Washington Post acknowledged his sordid role in the affair.

In Canada, the Toronto Sun, commenting on another "war criminal" case in which Wiesenthal was involved, and the accused finally determined to be innocent, editorialized: "It seems that material provided by professional Nazi hunter Simon Wiesenthal is wrong, but repeated [by the print and broadcast media] anyway."

Recently yet another example of Wiesenthal's blatant distortion of historical truth came to light.

In 1946 Wiesenthal published a book in Austria entitled KZ Mauthausen [Concentration Camp Mauthausen]. It consists mainly of mediocre sketches by the young Nazi hunter" purporting to represent the horrors of the Mauthausen concentration camp. One of the drawings depicts three Mauthausen inmates bound to posts who had apparently been sadistically put to death by the Germans. Another graphic example of murderous Nazi treatment of inmates!

Actually, the sketch is completely phoney.

In January 1945 Life magazine published a series of photos graphically recording the firing-squad execution of three German soldiers who had been caught operating as spies behind the lines during the "Battle of the Bulge." Photographer Johnny Florea recorded the execution in December 1944 near Bastogne. The three soldiers died "singing patriotic German songs," Life reported.

In its issue of 16 December 1983 the West German weekly newspaper Deutsche National-Zeitung published the Life photos and the Wiesenthal sketch together. Even a quick comparison makes clear beyond any doubt that the "Nazi hunter" had copied his drawing from the photographs. Wiesenthal's gruesome depiction of German barbarism in Mauthausen is actually the deceitful product of his malicious mind.

Another example of the generally spurious character of Wiesenthal's 1946 Mauthausen book is his citation therein of the supposed "death bed" confession of Commandant Franz Ziereis that four million [sic] inmates were gassed to death at the Hartheim satellite camp. Along with Dachau, Ravensbrueck, and Buchenwald, "Holocaust" historians no longer even mention Mauthausen as a death camp" or gassing center. According to the official tourist brochure now distributed at the camp, a total of only 206,000 persons were ever inmates at Mauthausen and its satellite camps.

Question: How long can a self-respecting world continue to even put up with, let alone shower honors on, this man Simon Wiesenthal – one of the biggest lying fakers of our age? 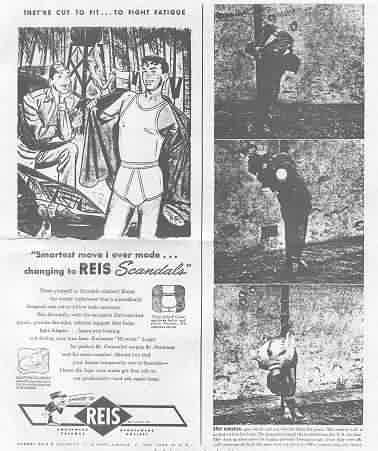 Above: "Life" magazine in January 1945 published these photos of three German soldiers shot by their American captors during the Battle of the Bulge. 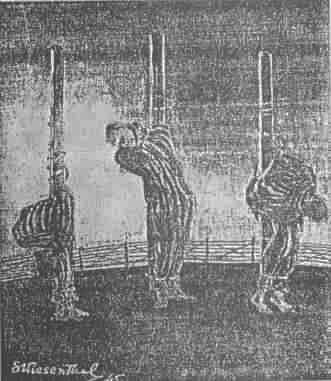 Above: Simon Wiesenthal's drawing (from his book "Kz Mauthausen," 1946) depicting three murdered inmate victims of German barbarity in the concentration camp of Mauthausen. Note striped inmate garb on the figures. But did Wiesenthal really see this in Mauthausen? Compare this drawing and the three photos on the facing page and you will know what Wiesenthal drew from.

With all his talk about the "millions" of victims of Nazi brutality, why is it that Simon Wiesenthal couldn't seem to find any of those for his graphic depiction of such brutality? Why did he have to resort to copying from a scene of German victims of American execution?