The Temperature at which Books Burn 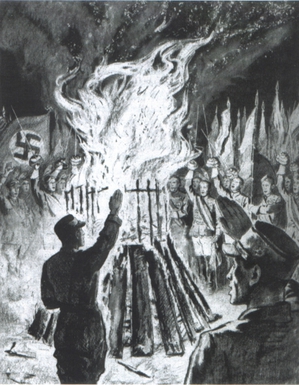 For twenty years, I have been commenting on how the themes and plot of Ray Bradbury’s dystopian tale of book-burning Fahrenheit 451 are coming to pass. My initial article on this subject was entitled, “How Fahrenheit 451 Trends Threaten Intellectual Freedom.”[1] My friend, Bradley Smith initially published it on the original CODOH Website in 1997. From then, it was revised and reprinted several times. In 1998 it was translated and published in German. It was also included in the Greenhaven Press Readings on Fahrenheit 451 as part of their Literary Companion Series.[2] The article was also published in the short-lived journal The Revisionist[3] where it was distributed to college students as an insert in their campus newspapers. Ironically professors and students on the campus of St. Cloud University chose to burn the offending journal.[4] Indeed, acts of book burning and censorship are a threat to today’s supposedly democratic societies and our notions of intellectual freedom.

On 7 March of this year, I received the first of many emails announcing that Amazon.com had banned the sale of “all Holocaust revisionist books.” The move by Amazon was clearly designed to quiet an organized campaign against the on-line retailer for the sale of such inconvenient titles. A quick Google search revealed dozens of recent articles and editorials criticizing Amazon’s sale of what was being deemed “Holocaust denial books.”[5] Perhaps the most prominent voice in the latest call to remove such titles for sale was that of the Yad Vashem Holocaust museum in Israel. Yad Vashem apparently made their demand in light of “the presence of anti-Semitism around the globe.”[6]

As I researched the matter I found that one publisher alone (Castle Hill Publishers) had 68 print books and 72 Kindle books removed from sale. At first it was difficult to determine the full magnitude of Amazon’s action since when a book is removed from sale, it literally vanishes without record. Amazon’s EBook Subsidiary (Kindle) contacted Castle Hill on 6 March and informed the proprietor that several titles were in violation of their content guidelines.[7] The ludicrously vague guidelines include this statement on offensive content, “What we deem offensive is probably about what you would expect.”[8] It is worth noting that other publishers were likewise impacted by Amazon’s action and that several titles that are no longer available dealt with subjects other than the Holocaust.

By 8 March, while the mainstream media was silent about the action by Amazon, several Jewish media outlets gleefully voiced their support of the decision but seemingly denied the magnitude of the ban. Jewish News Online, which calls itself “Britain’s Biggest Jewish Newspaper,” claimed that Amazon UK had “removed four books from sale which question or deny the Holocaust, following discussions with the Board of Deputies.”[9] In an article that appeared in The Jewish Chronicle, there was even greater denial of the magnitude of the action, “Amazon has stopped selling three Holocaust-denial books.”[10]

Within days of the action by Amazon, I commented to several friends that “we all knew this day would come” and noted how the trends identified in Fahrenheit 451 and Orwell’s 1984 were upon us. Optimistically one correspondent responded that we were not quite there yet. He explained that while the German thought-police will come and search your house for any trace of an objectionable book or the data to produce it, they will only confiscate such materials – they won’t burn your house down afterwards. He went on to note that in the US there has been no government action against publishers. While we do have that to be grateful for, it remains clear to me that Fahrenheit 451 trends are indeed coming to pass at an alarming rate.

It is important to consider the explanation of the origin of book burning by the “firemen” in Bradbury’s prophetic novel. Bradbury explained that as populations grew, they were made up of greater numbers of minorities. Such minorities make up a commercial marketplace. Bradbury’s Captain Beatty explains the situation, “The bigger your market… the less you handle controversy, remember that!”[11] He goes on:[12]

"Authors, full of evil thoughts, lock up your typewriters. They did. Magazines became a nice blend of vanilla tapioca. Books, so the damned snobbish critics said, were dishwater. No wonder books stopped selling…"

Just as we have in the US in 2017, the source of censorship in Fahrenheit 451 is not the government itself:[13]

"It didn’t come from the Government down. There was no dictum, no declaration, no censorship, to start with, no! Technology, mass exploitation, and minority pressure carried the trick, thank God."

"You must understand that our civilization is so vast that we can’t have our minorities upset and stirred. Ask yourself, what do we want in this country, above all? People want to be happy, isn’t that right? […] Colored people don’t like Little Black Sambo. Burn it. White people don’t feel good about Uncle Tom’s Cabin. Burn it. Someone’s written a book on tobacco and cancer of the lungs? The cigarette people are weeping? Burn the book."

In 2017 the silencing of ideas, whether spoken or written occurs without the flamethrowers of Ray Bradbury’s firemen. Indeed, it occurs without smoke or fire at all. The advances of technology have relegated actual burning of books and, at times, their authors to the dustbin of history. In our modern commercialized and digital age, content may be “burned” with the click of a mouse. The book that is not found on the Internet, for all practical purposes, does not exist. It is worth noting that the mainstream media avoided even mentioning that the recent banning occurred.

While the title of Bradbury’s novel refers to the actual temperature at which book paper catches fire and burns, we may also think of the figurative temperature of the social or political climate. Social climate typically refers to the general attitudes, beliefs and opinions of a society. Political climate refers to attitudes about contemporary political issues. The onset of “political correctness” in the US has resulted in the shunning of dissenting and inconvenient ideas.[14] College students are far less open to free speech for those with unpopular opinions than they were in the 1970s.[15] Several controversial speakers had college-speaking engagements disrupted with violent protests this year. UC Berkeley suffered over $100,000 damage when violent protestors blocked Milo Yiannopoulos from speaking.[16] At Middlebury College in Vermont, hundreds of students shouted down Charles Murray, one of the authors of The Bell Curve (1994) to prevent him from speaking.[17]

Indeed, the social “temperature” in the United States is a burning hot 451 degrees Fahrenheit. Dissident ideas may be burned with abandon. Free speech seems to be little more than comfortable speech. There are few voices that would argue, as did John Stewart Mill in his classic On Liberty:[18]