The United States and Israel

Joe Sobran is an author, lecturer and syndicated columnist. For 21 years he wrote for National Review magazine, including 18 years as a senior editor. He is editor of the monthly newsletter, Sobran’s (P.O. Box 1383, Vienna, VA 22183 [now defunct; ed.], or see www.sobran.com) “Killing Gentiles,” March 12, 2002, and “Is It Worth It?,” Sept. 20, 2001, are reprinted by arrangement with Griffin Internet Syndicate. All rights reserved.

Ariel Sharon has finally gone too far. Israel’s thuggish prime minister thought he could crush the Palestinian revolt with a policy of violence, killing Palestinians until they begged for mercy. But the policy has backfired by getting lots of Jews killed too, and the violence on both sides is escalating dangerously. Even Sharon’s indulgent American patrons, George W. Bush and Colin Powell, have called for a halt to the madness.

Sharon is acting according to his lights. He has never concealed his contempt for “the goy” – the gentile. Israel is based on the principle that Jews have rights “goyim” don’t have. Hence its abuse of Arab gentiles and its defiance of Western gentiles.

Mark Weber, of the Institute for Historical Review, has summed up the situation in one pithy sentence: “The truth is that if we held Israel to the same standards that we apply to Serbia, Afghanistan, and Iraq, U.S. bombers and missiles would be blasting Tel Aviv, and we’d be putting Israeli prime minister Sharon behind bars for war crimes and crimes against humanity.”

Unless I’ve missed something, even such alleged “anti-Semites” as David Duke and Louis Farrakhan don’t advocate treating Jews as Israel treats gentiles. Anyone with a spark of decency would be ashamed to treat Jews that way. Yet a gentile can be accused of anti-Semitism even for the purely verbal sin of criticizing Israel, whereas a Jew who supports Sharon’s physical cruelty is accused of … well, nothing. We have no handy word for even the most brutal Jewish treatment of gentiles. 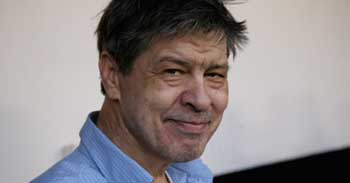 Perish the thought that Jews and gentiles should be equal! That would be anti-Semitism.

According to Israel’s “amen corner” in this country, Israel can do no wrong, except to concede too much to the Palestinians. Israel is a heroic “democracy” even when it treats its minority like dirt, and a “reliable ally” of the United States even when it steals American military secrets and sells them to Communist countries.

It’s an article of faith among the Amen Corner that the Israeli spy Jonathan Pollard – a national hero in Israel, by the way – has been punished far too harshly for his crimes, since the United States should have shared those secrets with Israel anyway. And far from recoiling from Sharon’s brutality, the Amen Corner defends him at every turn, just as Stalin’s fellow travellers in this country used to justify Uncle Joe – except that some in the Amen Corner think Sharon isn’t going far enough.

Not all the members of the Amen Corner are Jewish. Many are Christians – a shameful fact, since they never raise their voices in defense of Palestinian Christians. “See how these Christians love one another!” This kind of loyalty might make Judas Iscariot queasy.

The obvious danger is that the United States will once more be drawn into war with Israel’s enemies, chiefly Iraq. If that happens, we probably won’t be as lucky as in the 1991 Gulf War, which ended with an easy American victory and little cost until last September 11. This time the whole Middle East could erupt in war and revolution, leaving us with countless millions of bitter enemies on top of those we already have. It will be a boon to al-Qaeda recruitment.

The U.S. Government is toying with the possibility of using nuclear weapons in the war ahead – the war that the “war on terrorism” may morph into. We can be sure that the fanatical Sharon won’t object, and some of his American apologists are sounding rather interested in the idea of nuking Arabs. If the United States does it, Israel won’t have to.

We can only hope that Bush, Powell, and the rest of the top echelon of the government – which may or may not include Congress these days – will come to their senses before they decide to strike Iraq. U.S. support for Israel has already cost us far too much, and it may yet cost us far more. Ariel Sharon leaves no excuse for blindness about what we are dealing with.

Is It Worth It?

One thing is clear: the recent horrible events in New York and Washington had nothing whatsoever, in any way, shape, or form, to do with U.S. support for Israel. Many Arabs and Muslims hate this country and would hate it just as bitterly if there were no such thing as Israel.

At least this is what we are hearing from Israel’s apologists. The European press seems to assume that America’s policy toward Israel helped provoke the 9/11 attack. To the naive eye this would seem rather obvious. Yet we are assured otherwise.

Writing in The Wall Street Journal, Norman Podhoretz asserts that “if Israel had never come into existence, or if it were magically to disappear, the U.S. would still stand as an embodiment of everything that most of these Arabs consider evil. Indeed,” he goes on, “the hatred of Israel is in large part a surrogate for anti-Americanism.”

According to this argument, the terrible violence we have suffered has no connection to our alliance with Israel; that alliance not only has no cost for us, but is a positive blessing. We are lucky to have such an ally.

In fact, by this logic, the cost of the alliance falls on Israel. It would seem to follow that Israel, in its own interest, should break its special ties to the United States and reject any further American military and financial aid. Why should the Israelis, who have their own problems, take on all our enemies in addition?

Podhoretz’s argument is an insult to his readers’ intelligence. Of course American support for Israel has cost this country dearly. Any fool can see that, though in some quarters only a fool would say it out loud.

A personal note is relevant here. Fifteen years ago, Podhoretz and his circle tried to get me fired from my job at National Review for saying as much. That experience taught me a lot about the limits of free speech.

When it comes to Israel, an American journalist speaks his mind at his own risk. That helps explain why so few voices in the U.S. press are saying what European journalists may say without fear.

In the early 1980s it became clear to me that the pro-Israel lobby was trying to steer the United States into conflict with the Arab world. I saw nothing in the American interest in that; and my own two sons were approaching the draft age. Until then, I had been strongly pro-Israel myself; but sacrificing my boys for Israel was a higher price than I wanted to pay. Nor did I want other Americans to pay it.

But as soon as I began arguing publicly that the U.S.-Israel alliance was not only costly but dangerous to the United States, I became the target of Zionist vituperation and worse. Some, like Podhoretz, tried to ruin my career. And I’ve seen others get the same treatment.

Yet it should be clear even to those who see nothing to criticize in Israel that America pays a price for supporting it – and the price just got much heavier. No doubt there are other things that make this country hated and despised in the Arab-Muslim world, but to deny that Israel is a chief irritant is dishonest. And we must be free to say so.

My point here is not that Israel, or for that matter America itself, is to blame. It’s simply in the nature of things that, for all sorts of reasons, the interests of nations conflict; and when a nation projects force abroad, sooner or later it is going to provoke a strong reaction. What happened to us last week was only to be expected; I don’t feel like a psychic for having predicted it for many years.

Now we have to ask ourselves a simple question: Is it worth it? It’s a question we should have asked much earlier. Of course we have to weigh the rights and wrongs of the Middle East, but there comes a time when even taking the right side may bring unbearable costs.

It’s not encouraging that the U.S. military response to the 9/11 attack has been gauchely dubbed “Operation Infinite Justice.” Mercy may be infinite, but justice is always a matter of measure. And a sense of measure is just what has been missing in American foreign policy for lo, these many years.

"Jews as individuals are great individuals – talented, ambitious, intelligent, smart. As a people [though], I would not give them as high a grade. Jews know how to hate."
—Ariel Sharon, in an interview with the Israeli daily Yediot Aharanot, Feb. 1, 2002. Quoted in the Los Angeles Times, Feb. 2, 2002, p. B3.

Is Israel Our Friend?

There’s a myth now about the British hanging together in those dark days [of 1939-1941]. “London can take it,” Ed Murrow told America in his CBS broadcasts. Actually, morale was appalling. Most people correctly had little confidence in the competence of their government and thought Germany was going to win. In the Channel Islands, which the Nazis did take over, the people greeted them hospitably and turned in Jews with zest. The British Ministry of Information employed 10,000 people to read people’s mail surreptitiously, intercepting about 200,000 letters a week, and discovered that people were deeply pessimistic and thought Churchill was “played out.”

A secret government report spelled out the popular lack of nerve: “Portsmouth – on all sides, we hear that looting and wanton destruction had reached alarming proportions. The police seem unable to exercise control … The effect on morale is bad and there is a general feeling of desperation … their nerve had gone.”

Churchill’s famous speeches about their “finest hour” and so forth didn’t have much effect either. He delivered them in the House of Commons, and when the BBC asked him to rebroadcast them on the radio, he refused. So the BBC secretly used an actor named Norman Shelley to read them, pretending to be Churchill. Shelley’s usual role was to play Larry the Lamb on “Children’s Hour.” Most people didn’t actually know what Churchill’s voice sounded like, and those who did thought it sounded funny. Letters poured into No. 10 Downing St. asking what was wrong with the PM.

Many people tried to shut out the war as much as they could. By the end of 1940, nearly a third of the population admitted to not following news of the war. When asked what depressed them most, people put the weather first, then war news, then the air raids. Life was rotten anyway for a huge slab of the population, which was malnourished, poorly housed, barely educated and deeply discontented. When they visited the [London] East End, the king and queen were soundly booed. In the summer of 1941, a woman got five years in prison for saying “Hitler is a good man, a better man than Mr. Churchill.”
—Alexander Cockburn, author and columnist, who was born in Britain in June 1941, writing in “Remembrances of War and Summer,” Los Angeles Times, May 28, 2000.