A lot is known about the hunger-holocaust in the Ukraine which was triggered by Stalin in the early thirties, to which about 7 million people fell victim. It is much less known that Britain enforced a similar policy in Ireland, followed for centuries in order to break the will to independence of the Irish. Almost completely unknown are the consequences which the British occupation policy had on the nutritional situation in India. Although the Indian subcontinent had always suffered from relatively severe famines, they were never as devastating as under the British occupation.

Hunger has always been a steady companion of Indian history. Already in the Middle Ages, India had suffered many famines, resulting mostly from periods of drought. A much more drastic deterioration of India's situation, however, came about with the beginning of the British colonial rule. The Indian M. Alamgir elaborated about this:[1]

"During colonial times, India suffered more frequently, more severely, and at larger extents under famines than at pre-colonial times. [...] It is important to note that hunger and death occurred even when there was a uniform administrative structure and a far superior traffic system than at the time of pre-British India under the moguls. In addition to usual climatic factors it turns out that the bad situation got even worse as a result of price manipulations by food merchants, inactivity of the government as well as export of food even at times of shortages, accompanied by a gradual deterioration of the income as well as the employment situations of the agricultural workers and small farmers."

The most appalling hunger catastrophes of all took place in Bengal, the grain center of India at that time, in 1770, when approximately one third of the total population died because of a drought – 10 million people! The British East India Company, which had occupied the country five years earlier, was completely unprepared for this situation. But it did not even once attempt to introduce any measures of aid worth mentioning. The responsible British colonialists evidently were interested only in maximizing their profit through trading and the export of food, which, even though it did not cause the famine, certainly made it drastically worse.[2]

Until the dissolution of the British colony in the year 1947, some thirty more famines occurred,[3] some sources even mentioning about 40, depending on how a famine is defined.[4] Consequently, India's former corn center Bengal was transformed to the poorhouse of Asia within only two centuries.

There are many reasons for this catastrophic colonial policy during these 182 years, to which countless more millions of Indians fell victim than would have died under normal circumstances. In the beginning was the dismantling of the traditional Indian social system, in which the respective local rulers and landowners (in Hindu zamindāri) took care of their subjects in times of need for protection and the supply of food rations necessary for survival. The British replaced this paternal social system with something that was decried later as Manchester capitalism: landowners had to pay a fixed tax to the colonial power. The questions of rent and lease income were left to the 'free market'. Delinquent taxpayers were simply disowned; leasers and renters who did not meet their obligations were evicted. In many cases, the paternal zamindār were transformed to greedy capitalists. The consequence was the destruction of the living foundations of many small farmers and agricultural workers. The rich became richer and more ruthless, the poor poorer and more helpless.[5] According to the ideology of Manchester capitalism, any interventions by the authorities into the economy were generally avoided. Despite frequent famines, effective interventions in the market did not occur, for example through price control, subsidies, social relief measures, or government financed or supported food purchases and transports.[6]

Bengal (Eastern India, today's Bangladesh) was one of the earliest colonial districts conquered by Great Britain in India. Accordingly it still has to suffer most under the consequences.

The situation worsened, especially since the turn from the 19th to the 20th century, caused by accelerated population growth, which led to an increased number of penniless farmers, as well as by the rise of lease rents to up to 50% of the value of the harvest.[7]

The Causes of the last Indian Colonial Tragedy

The last big famine in Bengal under British occupation occurred between 1942 and 1945 (Brahmaputra-Ganges-Delta, today partly India, partly Bangladesh). Besides the unfavorable social conditions already described, other factors were added which in the end triggered the catastrophe. The Indian Amartya Sen, who received the Nobel Prize for Economic Science in 1998, took the eccentric view that this famine was man made because there was essentially no food shortage,[8] which earned him strong opposition, to put it mildly.[9] The discussion resulting from Sen's warped theory strengthened the theory that food shortages are the primary cause of famines.[10]

The literature listed the following individual causes for this catastrophe, during which about four to five million people lost their lives:[11] 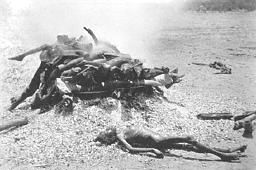 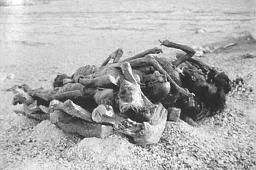 Victims of the British Hunger-Holocaust 1942-1945
in Bengal during their Cremation.

The statistical data for Bengal in the years 1942-1944 reveal that food availability was the lowest in at least 15 years, and probably 11% lower than in 1941.[13] This food scarcity caused by war and flood catastrophe might not have sufficed to trigger such a huge famine that drove four million people into death from starvation, among those about one third of the entire landless population. It was in fact a combination of several factors that triggered the catastrophe, for which primarily the British occupation authorities have to take responsibility, namely:

The catastrophes which were caused by British imperialism are not limited to the Indian subcontinent. In many respects, the history of suffering of Ireland resembles that of India, although the Irish certainly suffered far longer and more terribly under the British than did the Indians. James Mullin wrote about this in the newspaper The Irish People:[14]

"[...] It seems that the British colonial civil servants in India brought on a similar famine, as they did in Ireland a century earlier.[...]"

Moreover, an extraordinary characteristic of this horrible list of genocides and worldwide mass murders, triggered by British imperialism (through war, epidemics, and famines), is the total absence of any public awareness in Britain. The analysis of writings about British history shows for example, that the Irish famine of the years 1845-1847 is covered by a few lines at most. And it can hardly surprise that the famine in Bengal is not mentioned at all, Mullin points out. 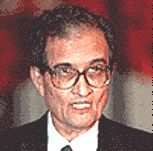 Prof. Dr. Amartya Sen, Nobel Prize winner for Economical Sciences 1998, dedicated most of his work to the fight against hunger in the Third World. His contribution to our understanding of famine is highly controversial, as it suggests measures which are highly counterproductive. Hence, his work is little appreciated in India.

Even though India imported about 1.8 million tons of cereals before the war, Britain made sure that India had an export surplus of rice at record levels in the tax year 1942/43.

"The bad situation in Bengal was discussed in the British Parliament during a meeting at which only 10% of all members participated.

Repeated requests for food imports to India (400 Million people) lead to the delivery of approximately half a million tons of cereal in the years 1943 and 1944. In contrast to this was the net import to Great Britain (50 Million people) of 10 million tons in the second half of the year 1943 alone."

Churchill repeatedly denied all food exports to India, in spite of the fact that about 2.4 million Indians served in British units during the Second World War.

The Nobel Prize winner Amartya Sen lived through the famine in Bengal as a nine year old boy. He reported how incredibly many starving, dying people appeared suddenly from nowhere. According to Prof. Sens point of view, it is always autocratic systems which are affected by starvation catastrophes, never democracies, because they have to pay more attention to the basic needs of the people. Considering, however, that democracy hasn't prevented India, Bangladesh and other third world countries from suffering severe famines, Sen's view certainly is too simplistic.

In colonial India and Ireland, the British ruled autocratically. They had absolute power, which often corrupts absolutely, as is well known. But corrupt governments have little interest in halting a famine, whatever the reason for its occurrence. In Ireland as well as in India, food could have been made available, if not by redistribution, then by massive imports or a change from repressive policies, but there was no moral incentive to such changes. All in all, British colonial policy was aimed at exploiting its colonies as far as the people living in them would allow without major rebellion.

During recent years, the young German historian Christian Gerlach has become known for his examination of the food policy of the Third Reich during the Second World War. In two monographs he claimed that the Third Reich, based on experiences gained during the First World War, did everything to ensure that the German population would not suffer from hunger during the war. To this purpose, the food resources of occupied territories were used to cover German needs, by conscious neglect of the nutritional needs of the local population. According to Gerlach, this was especially true for eastern territories which were under temporary German occupation during the Russian campaign. Consequently, Gerlach's two books addressing this topic, which were published by the communist publisher Jan Philipp Reemtsma, have telling titles: Krieg, Ernährung, Völkermord (War, nutrition and genocide) and Kalkulierte Morde: Die Deutsche Wirtschafts- und Vernichtungspolitik in Weißrußland 1941 bis 1944 (Calculated Murders: The German Economical and Extermination Policy in White Russia 1941 to 1944).[15] Gerlach is certainly correct in so far as the government of the Reich placed a higher priority on the nutrition of the fighting troops and its own people than on the nourishment of essentially non-participating population groups in occupied areas. In this respect the policy of Great Britain resembles that of Germany at this time, both forced by purely war related issues. There is, however, a fine difference: whilst the nutritional situation in the German occupied zones of the Soviet Union was disastrous in some areas not due to German measures, but because of Stalin's policy of 'scorched earth' during the Soviet retreat – a fact to which Gerlach hardly gives his attention – the corresponding scarcity and inflation in India was essentially the consequence of British policy.

Unfortunately it also has to be stated here that, as always, actual or alleged German atrocities receive one-sided and often distorted attention in the public mind, whereas balanced descriptions and comparative studies of similar events which occurred elsewhere in the world are generally avoided. That could put in doubt the alleged uniqueness of the German 'evilness', and this is, as is generally known, politically incorrect and thus undesirable.