The U.S. Holocaust Memorial Museum Fakes a Photo to Rake in Funds

Looking over a recent U.S. Holocaust Memorial Museum fundraising mailer, CODOH researcher Richard Widmann spotted a picture he thought he recognized. Taken at some time after the American liberation of Dachau, the picture (shown below) shows healthy inmates cheerily waving beneath an American flag run up a makeshift flagpole. There was just one problem, however: the Museum's caption reads:

Former Dachau prisoners celebrate the first anniversary of their liberation by hoisting a homemade American flag in thanks on April 30, 1946. National Archives, Washington

—but Widmann believed it dated from just days after Dachau's capture.

The photo has long been of interest to revisionists, and has appeared in standard as well as revisionist publications, including Joseph Halow's Innocent at Dachau (following page 156). Revisionist have interpreted it and similar photos from Dachau and other liberated camps that show the good health and spirits of many of the inmates, as correctives to attempts to depict wasted victims of typhus and other epidemics as typical, indeed deliberate, results of German policy. 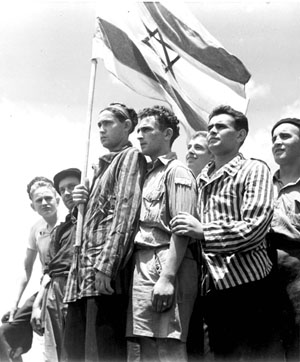 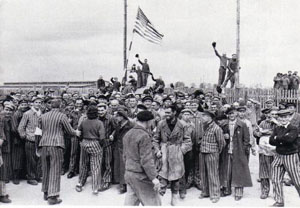 The USHMM’s commitment to truth seems to be flagging

Widmann wondered whether he could have been mistaken. And what could have been the USHMM's purpose in misdating and miscaptioning the photo? The mailer was a fundraiser, of course, to help ensure, in the USHMM's words, that "every generation to come will remember the Holocaust." Of the dozen Holocaust photographs featured in the mailer, the one of the inmates hoisting the American overlaps with one of Jewish "Buchenwald survivors" ranged under the Israeli flag.

The Zionist picture covers part of the Dachau picture, is above it and to the right, depicts a handful of resolute Jewish refugee-pioneers beneath a Zionist flag that dwarfs the Stars and Stripes beneath it, and in every sense dominates the Dachau picture.

When the USHMM remembers "the Holocaust," we may be certain that as Norman Finkelstein has characterized the word "'The 'Holocaust' is in effect the Zionist account..." of what happened to the Jews during the war. When the USHMM goes to raise funds from voluntary contributors (rather than the American taxpayers it derives a large part of its funding from), it turns first to wealthy Zionists.

Thus the caption, "Safe harbor in Israel! New hope and renewal for these Buchenwald survivors as well as for Jews everywhere." for the survivor picture that stands out.

The Dachau picture? The folks who put together this carefully thought-out fundraiser needed a U.S. flag, but a smaller one, to show that, yes, Americans count too—but we all know who's top dog. What about that date, however? Widmann, working closely with Joseph Halow, who served as a court reporter at the Dachau war crimes trials, identified the photo as number 207745 through the copy in Halow's personal collection. The original is at the National Archives in Washington D.C., and has a date stamp on the reverse.

The staff at the National Archives confirmed that the photo was indeed taken on April 30, 1945 and not 1946, as the museum claims. One wonders at the Museum's temerity in imagining that the everybody would be hoaxed by a fraud which presumed that the "survivors" of Dachau would return one year later, and dress up once more in their prison garb, to boot.

Even so, pictured a crowd of healthy inmates at Dachau just after liberation runs counter to the Museum's propaganda efforts. After all, the main come-on to American gentiles who visited the USHMM is the link between the American capture of the camps—amid the tried-and-true scenes of horror—and the Hitler order-gas chamber-extermination Holocaust. So, keep the picture, fake the caption, change the date—and the facts be damned!

The USHMM admits that it is raising funds "to change the way people think." Falsifying the facts—even in ways as petty as falsely captioning and falsely dating a relatively unimportant photograph—is an unworthy way of transforming people's thought. It is more compatible with propaganda, "self-criticism," brainwashing, and other totalitarian methods for controlling, as well as changing, "the way people think," than it is with the democratic values of free inquiry and uncompromising pursuit of the truth. And if the Museum doesn't scruple to provide a fake interpretation of this picture, what wouldn't they do to falsify evidence more central to the Holocaust legend?

[Find out when you receive CODOH's long-promised campus supplement, bursting with exposes of fakery in the USHMM's permanent final exhibition on the Holocaust!]