The Wandering Who: A Study of Jewish Identity Politics 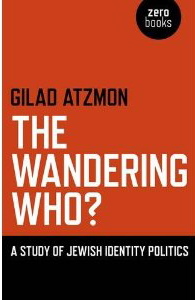 In a way, this latest book by Israeli-British saxophonist-commentator Gilad Atzmon is a case study. It is a study of the situation of mastery by a Zionist cabal over the foreign policies of the United States and the United Kingdom and of the critical centers of public opinion that guide these policies. What makes this subject a case is the broader conception of Jewish-led enterprises as a sort of evolved parasite first infesting, then controlling institutions and structures of human organization generally, going back to hosts as ancient as the Roman Empire. Whenever and wherever systems of human order and power have developed to a scale that justifies the effort, strategic networks organized and staffed largely by Jews have sprung up to move matters in the directions that favor them (the major exceptions to date seemingly confined to East Asia). This applies not only to empires and republics, but to dictatorships, kingdoms, professions, labor unions, media, banks, and supra-national organizations—wherever power of any sort intersects organization of any kind.

The case Atzmon delineates in 202 trenchant, eminently readable pages is a beast in whose belly—Israel—he was born and raised, up to and including a stint in the vaunted Israeli Defense Forces, in which the future saxophonist’s billet was in a military band that he reports played as badly as possible in order to keep its future workload to a minimum. But Atzmon’s experiences were not limited to blowing the horns such as those with which his ancient forebears reduced the walls of Jericho. He also witnesses numerous cases, described in this book, of cruelty and murder visited by his comrades-in-arms on their hapless opponents, the natives of the Palestine that Israel is relentlessly swallowing up in the finest traditions of the ancient Roman and all succeeding empires.

It was primarily these experiences that opened the young jazzman’s eyes to the inhumanity of the Zionist project in the Middle East, one to which his own parents and grandparents had been fervently—fanatically—devoted throughout his life. His account is, however, not excessively personal beyond the undeniable fact that his publishing it places him squarely in his subjects’ murderous crosshairs. While there is a grippingly human “personal journey” to be discerned in the thread of its argument, this is not an autobiography. At a time now well over a decade past, Atzmon left the fold of his native country and its noxious ambitions and took up residence in a place at least relatively distanced from it: Britain. But even in the heart of a distant empire whose own death throes gave rise to Israel, he finds himself monitored and hectored by agents—sayanim, as they are called in Hebrew—of the perfidy he fled. So, perhaps for that reason, he has turned to make his stand, to fight a fight he would have no chance of being able to fight on his native soil.

He conducts this fight informed by a distinctly “left” (perhaps collectivist) vision, no doubt a vestige of his origins in the “tiny, far-away, socialist theocracy,” as Joseph Sobran once memorably styled it. His second chapter is titled “Credit Crunch or Zio Punch,” in which he details a correct view of recent economic developments as arising from the policies of the Jewish Chairman of the Board of Governors of the US Federal Reserve Alan Greenspan. He styles Greenspan as formulating his policies in league with “capitalists” whose own satanic profit motive expels them irretrievably from the pale of the righteous, or even the respectable, in doing which Atzmon conflates the inherent adaptability of entrepreneurs to pernicious government policies with complicity in those policies. This jaundiced view of private enterprise is effectively confined to the one chapter in which it appears, and does not spoil even that chapter. It only leaves this reader with the disturbing suspicion that Atzmon might actually envision some statist (or law-based) solution to the problems he laments—a solution that, as history has amply demonstrated, invites back in the very Problem (see first paragraph above) that he seeks to abate.

In his penultimate chapter “Truth, History and Integrity,” Atzmon devastatingly exposes the myriad ways in which the Israeli juggernaut defends, expands, exploits the myths of the Holocaust to serve its own evil agenda. He even confesses an innocent reaction as a teenager upon first confronting the noise generated by this program: “I wondered why they bragged so much about being resented”—an unassailably logical reaction that invites comparison with the wonderment of another innocent child as he beheld crowds ogling the magnificent raiment of an utterly naked emperor. His analysis of the exploitation of this mendacious narrative is conclusive: yesterday’s “victims” are today’s perpetrators, shielded by the tragic legacy borne for the most part by the parents or grandparents of some of them. And those perpetrators do all they can to make the most of that legacy, even to flying their young to the Polish sites of concentration camps in order to imbue in their minds the sights and sounds of a place where terrible things must have been done to … people those young might suppose they might somehow be descended from.

The final chapter, “Being in Time,” is by far the most philosophical of a book thoroughly laced with deep understandings of both personal and group emotions and dynamics, including perspectives in full depth over the course of time measured in centuries and, in fact, millennia. In a few short pages, “Being in Time” delivers a fundamental definition of historical understanding that will delight the soul of any committed revisionist, whether of the specific histories concerned with Atzmon’s story or the history of any other times and places whatsoever. And through the lens of this concisely delineated metahistory, he is able to describe the distortions characteristic of Jewish/Zionist thought that offers an appreciation of profound import.

From Britain, Atzmon has been at a disadvantage to witness and chronicle the takeover of the mind, if not the heart, of the American Behemoth for purposes of world domination. America, however, is large and important and open enough (still) to be observed in considerable detail from a distance, particularly for a speaker of English. Atzmon in fact has toured the United States in person with his jazz ensemble, along with many other countries besides. But ultimately it is his heritage in the dragon’s very bosom that enables him to deliver a penetrating perspective of its nature, its aims, and its methods.

In the end, the work is an object demonstration of what George Orwell meant when he wrote, in 1984, “He who controls the past, controls the future.”

The Wandering Who? is available from