It is probably the single most widely recognized and memorable Holocaust image of all: a frightened and apparently doomed young boy, his arms upraised, standing with other Warsaw ghetto Jews under the watch of an armed German soldier.

In a recent essay, Erwin Knoll, editor of the influential monthly The Progressive, aptly sums up the popular view of this photo:[1]

It is the photograph that has come to symbolize the Holocaust: a small Jewish boy, frightened eyes downcast, hands raised above his shoulders, surrounded by Nazi troops. This is the final roundup of Jews scheduled for execution during the Warsaw Ghetto uprising of 1943. More Jews, hands raised, can be seen in the background. We know as we stare at the photo that soon they will all be dead. The photo appears in archives and exhibitions, in magazine and newspaper articles about the Holocaust, in television documentaries and history books. By now I must have seen it hundreds of times … 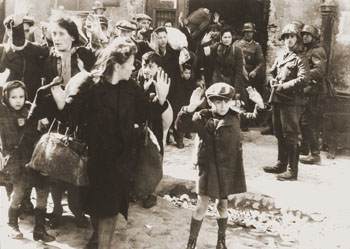 This photograph, perhaps the most familiar Holocaust image, shows seven-year-old Tsvi Nussbaum as he raises his hands in Warsaw in 1943. After the war, Nussbaum moved to Israel, and then to the United States, where he worked as a physician in New York State.

This photograph is one of several dozen included in the official SS report on the April-May 1943 German police Aktion against the Warsaw ghetto.[2] In the decades since the end of the war, it has been reproduced millions of times in countless books, magazines and films, serving as a kind of “all purpose” Holocaust illustration. Enlargements of it have appeared at Holocaust exhibitions and displays in countries around the world.

Millions of people have been led to believe that the bewildered boy in this poignant photo was murdered shortly after this memorable image was preserved on film. “The photograph wrenches the heart,” The Washington Post has commented, “because it appears that the boy, like millions of Jews and others, is to die at the hands of the Nazis.”[3]

In a 1979 advertisement for a set of sensationalized Holocaust story books published in a leading American weekly paper, this photo appears with a caption reading:[4]

His name was Arthur Chmiotak. He would be 42 this May, but he was gassed to death in a Nazi concentration camp before he was even ten years old. Why? Because he was an “undesirable,” a weed in Hitler’s garden of perfect Aryan flowers. Just one of more than six million that had to be eliminated …

In Germany, a widely used school textbook describes this photo to young readers with these words: “Warsaw, May 1943: Destruction of the Jewish ghetto and deportation of its residents to gassing in the Treblinka camp.”[5]

Contrary to legend, though, the “ghetto boy” was not killed. He survived wartime internment in Warsaw and in a German concentration camp.

Several decades after it was taken, a New York physician, Tsvi C. Nussbaum, revealed that he was the lad in the famous photograph. “I remember there was a soldier in front of me, and he ordered me to raise my hands,” Nussbaum later recalled. After his uncle intervened, the seven-year-old boy was allowed to join the rest of his family. Along with relatives, young Nussbaum was deported from Warsaw in 1943 to the Bergen-Belsen camp in western Germany. After liberation at war’s end, he moved to Israel, from where he migrated to the United States in 1953. In 1990 he was living in Rockland County, New York.[6]

Nussbaum’s story has held up under critical examination, and even decades later he still bore a striking resemblance to the boy in the photo.

Jewish Holocaust historians “who have long considered the photograph a sort of sacred document” were not pleased by Nussbaum’s revelation, reported The New York Times, because they were “convinced that the symbolic power of the picture would be diminished were the boy shown to have survived.” Nussbaum himself was surprised by such concerns. “I never realized that everyone puts the entire weight of six million Jews on this photograph,” he said. “To me it looked like an incident in which I was involved, and that was it.”[7]

Dr. Lucjan Dobroszycki of the Yivo Institute, a Jewish history center in New York, warned that “this great photograph of the most dramatic event of the Holocaust requires a greater level of responsibility from historians than any other. It is too holy to let people do with it what they want.”[8] In other words, Dobroszycki suggested, historical truth must not be permitted to diminish the picture’s emotional impact and usefulness.

Widely regarded as one of this century’s most emotionally powerful images, this photograph is indeed telling evidence of the tragic fate of Europe’s Jews during the Second World War, but in a way quite different than many people believe.