A German chemist’s meticulous new technical-forensic examination of the alleged execution “gas chambers” of Auschwitz has been attracting a good bit of attention in Europe.

Printed on glossy paper in a large, magazine-size format, this 110-page report contains numerous photographs (several in color), charts, diagrams, and more than 200 reference notes. It is entitled Gutachten über die Bildung und Nachweisbarkeit von Cyanidverbindungen in den “Gaskammern” von Auschwitz (“Technical Report on the formation and detection of cyanide compounds in the ‘gas chambers’ of Auschwitz”) Germar Rudolf, the author, is a certified chemist and doctoral candidate who has been working at the renowned Max Planck Institut research center in Stuttgart. The samples taken by Rudolf from the alleged execution “gas chambers” in Auschwitz were analyzed by the prestigious Institut Fresenius. 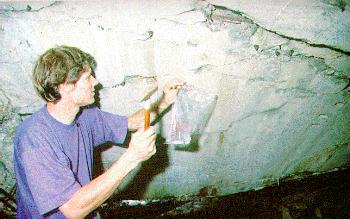 Germar Rudolf at Auschwitz-Birkenau, taking samples from the ruins of the mortuary room (the supposed "gas chamber") of crematory (Krema) II.

Rudolf’s study provides further authoritative confirmation of the conclusions reached by American gas chamber specialist Fred Leuchter in his widely-distributed 1988 report, as well as of the similar findings of American chemist William B. Lindsey, Austrian engineer Walter Lüftl, the Institute of Forensic Research in Krakow (Poland), and German engineer Wolfgang Schuster. (For more on this, see the Winter 1992-93 Journal.).

“For chemical-physical reasons,” concludes Rudolf, “the claimed mass gassings with hydrocyanic acid in the alleged ‘gas chambers’ in Auschwitz did not take place.” Eyewitness claims of gassings in Auschwitz are not consistent with the laws of natural science, he affirms. “The supposed facilities for mass killing in Auschwitz and Birkenau were not suitable for this purpose… The supposed gas chambers in Auschwitz and Birkenau did not come into contact with Zyklon B. In legal language: the weapon was not loaded.” [editor's comment: that last, misleading sentence is from a promotion flyer; it cannot be found in the Rudolf Report itself.]

Rudolf also dismissively notes that “the reports and position papers that have appeared so far in response [to the revisionists] – written, astonishingly, for the most part by non-specialists – are, above all, shameful.” Hundreds of copies of the Rudolf report have already been distributed to leading figures of German academic, political, business and media academic life.

The Rudolf Gutachten is available for DM 46 (about $28) from: Cromwell Press, 27 Old Gloucester St., London WC1N 3XX, England, U.K. [No longer; see here for currently prices and availability of the recent German and English editions.]

Despite its rather innocuous-sounding title, a new 350-page book is one of the most impressive works of its kind to appear in German on the Holocaust issue. Vorlesungen über Zeitgeschichte: Strittige Fragen im Kreuzverhör (“Lectures on Contemporary History: Controversial Questions in the Cross Fire”) by Ernst Gauss was published earlier this year by Grabert Verlag of Tübingen.

Presented in the form of six lectures, including probing questions and commentary, this mine of valuable information provides an excellent overview of the entire subject of Holocaust revisionism. It is well-organized and detailed, with a rather strong emphasis on technical aspects of this issue. Numerous charts, diagrams, photos (some in color), and a good bibliography help to round out this important work.

Vorlesungen über Zeitgeschichte can be ordered for DM 40, or about $25 (softcover, not including shipping), from: Grabert Verlag, Postfach 1629, 72076 Tübingen, Germany. [No longer; see here for currently prices and availability of the recent German and English editions.]

One of the most important works of Holocaust revisionism to appear in Germany in recent years is Die zweite babylonische Gefangenschaft: Zum Schicksal der Juden im Osten seit 1941 (“The Second Babylonian Captivity: On the Fate of the Jews in the East Since 1941”) by Steffen Werner. Privately published in early 1991, it has been distributed by Grabert Verlag of Tübingen.

This detailed, carefully written 200-page softcover book deals with the fate of the hundreds of thousands of Jews who were deported to the East and allegedly gassed in “death camps,” especially Treblinka, Sobibor and Belzec. Werner assembles an impressive amount of documentation – including citations from numerous secret wartime documents and quotations from high-ranking German officials, and 483 reference notes – to support his thesis that the hundreds of thousands of “evacuated” Jews were deported to the occupied Soviet territories, and particularly to the province of Belarus (White Russia). The work also contains maps (including two in color), diagrams and charts.