German-born Australian revisionist author and activist Dr. Fredrick Töben was arrested in London. He is accused of running an internet site that argued for the main principles of Holocaust revisionism including that the Nazis did not murder six million Jews. Töben was held at Heathrow at the request of the German authorities for publishing “anti-Semitic and/or revisionist” material between 2000 and 2004 and held on an EU arrest warrant.

Töben is the founder of the Adelaide Institute, which publishes a newsletter and runs a Website that questions the orthodox view of the Holocaust. 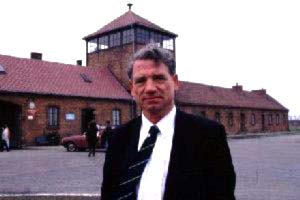 Dr. Töben at the gates of Auschwitz-Birkenau

Although Holocaust denial / Holocaust revisionism is not yet an offence in Britain, it is a thoughtcrime in Germany and Dr Töben could face up to five years in prison.

Dr Töben was arrested in transit from America to Dubai, the court was told. Tina Whybraw, for the Crown, on behalf of the German authorities, said that he was accused of committing the offences in Australia, Germany and other countries.

He told the court that “the Germans are out to get me” and claimed he was the victim of “legal persecution”. “It’s a witch-trial mentality in Germany concerning this matter, which is not the case in England yet,” Dr Töben said.

The EU warrant for Mr Töben's arrest was issued by Germany. It reads: "From 2002 to this day the worldwide, internet publication of an anti-Semitic and, or, revisionist nature deliberately contrary to historical truth the said publications deny, approve or play down above all the mass murder of the Jews, planned and implemented, by the national socialist rulers.”

Those interested in donating to the Fredrick Töben Legal Defense Fund may get more information at: The Adelaide Institute Website.