Transfers to the Reich

The Unregistered Inmates of Auschwitz
by Richard A. Widmann
Published: 2001-07-01

Richard A. Widmann was educated at Rutgers University and Seton Hall University, from which he holds a degree in quantitative analysis. He has published over forty revisionist articles in books, journals, and newsletters around the world. Since 1995 he been editor of the website of the Committee for Open Debate on the Holocaust.

Orthodox historians of the Holocaust have long maintained that most Jews who arrived at Auschwitz, and were not soon registered as inmates there, met a quick end in the gas chambers. Typical of the prevailing view is the opinion of Yisrael Gutman, chairman of Yad Vashem's Academic Committee, that "more than one million Jews were murdered in the gas chambers [of Auschwitz] on arrival and their bodies incinerated in the camp's crematoriums without the victims ever being registered."[1]

Revisionist scholars have long disputed the claim that Auschwitz arrivals who were not registered as inmates were sent immediately (or any time thereafter) to the gas chambers. Lately, Swiss researcher Jürgen Graf has addressed the matter in this journal.[2] Similarly, Germar Rudolf has recently challenged Wolfgang Benz and Serge Klarsfeld on the fate of unregistered detainees of Auschwitz.[3]

Interestingly, a number of orthodox historians of the Holocaust have also advanced alternative explanations of the fate of unregistered Auschwitz detainees. Shmuel Krakowski, the chief archivist of Yad Vashem, Israel's national memorial to the Holocaust, states:

Danuta Czech, former head of the research department of the Auschwitz Museum, explains,

Holocaust historian Gerald Reitlinger, author of The Final Solution, has also noted that "... very large groups of Jews in 1944 stayed in the camp without registration, awaiting transfer elsewhere, and they stayed long enough to die of epidemics."[6] The issue is really not whether unregistered inmates were transferred elsewhere but rather just how many were transferred. 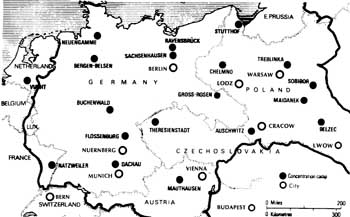 The chief concentration camps on the territory of the Greater German Reich. By mid-1944, most of these camps, including Auschwitz, controlled dozens of sub-camps, in which inmates worked in manufacturing, mining, agriculture, and other types of industry.

Given the gaps in the available documentary record, computing the numbers of unregistered transferees is not a simple operation. Studying the inmate population statistics from the records of the concentration camp system, however, allows a strong inference as to the numbers and origins of transfers to Reich camps in 1944. The numbers of registered inmates for the entire concentration camp system during the years of Auschwitz's existence are known. Analyzing the data for all camps, we find that the system averaged around 100,000 inmates in 1941 and 1942. By August of 1943, the numbers had doubled to 220,000. They continued to rise, reaching 520,000 by August of 1944. In January 1945, when Auschwitz was abandoned, the population of the concentration camp system was recorded as 710,000 inmates.[7] Among the camp population statistics for Auschwitz alone are: August 1943, 74,000; August 1944, 105,168; January 1945, 67,000.[8]

In the period from 1944 to 1945, when the entire camp system population grew dramatically (five to seven times the 1942 population), large numbers of inmates were being transferred from the east to the west. Initially, these transferees were non-Jewish:

Declaration of the Reich territory as "Judenfrei" precluded the transfer of Jewish Auschwitz prisoners to camps inside Germany. Since the prohibition did not apply to non-Jewish prisoners, many non-Jews, especially Poles, were moved to camps in the German interior.[9]

This situation would change by the spring of 1944, when large numbers of Jews were transferred to concentration camps in the Reich. Dr. Franciszek Piper, head of the Department of Historical Research at the Auschwitz Museum, has acknowledged that "The subsequent lifting of the prohibition [of sending Jews to the Reich] in the spring of 1944 marked the onset of mass transfers of manpower surpluses into the Reich. A new category of prisoners was established. These prisoners were not assigned serial numbers."[10] It is from this time, the spring of 1944, that Auschwitz "became the center for the distribution of Jewish labor for the entire network of concentration camps."[11]

Arno Mayer noted, in his analysis of the "final solution," that while huge numbers of Jews were being delivered to Auschwitz-Birkenau:

... thousands of others were being shipped out by train to camps in Germany, including Buchenwald, Dachau, Flossenbürg, and Sachsenhausen. These evacuations were part of the frantic effort to remove valuable labor and incriminating evidence from the path of the Red Army. During the second half of 1944 about 400,000 foreigners were forcibly taken to Germany, most of them from the east and a large number of them Jews.[12]

We know as well that at this time Hermann Göring and Albert Speer, desperate to increase the output of fighter planes, proposed a plan to build an impregnable underground factory at Auschwitz. On April 7, 1944, Hitler offered to urge Heinrich Himmler to help procure the necessary manpower by impressing 100,000 Hungarian Jews. On May 11, Himmler notified Oswald Pohl, who was responsible for administering the concentration camp system, that Hitler had ordered 10,000 Waffen-SS troops be detached "to guard the 200,000 Jews ... [about] to be transferred to the Reich's concentration camps for assignment to large construction projects of the Todt Organization or to other essential war work."[13]

A notable indicator of the policy of transfers to the west is the case of famous diarist Anne Frank. Anne Frank and her family were deported to Auschwitz on September 5, 1944. Anne and her sister Margot were transferred from the transit camp in Auschwitz II to Bergen-Belsen on October 28, 1944, along with some 1,300 other female Jews.[14] It is worth considering that during this span of seven weeks that the Frank sisters were transferred from the Netherlands all the way to Auschwitz on the Polish border, only to be sent nearly all the way back, to Bergen-Belsen, two or three hours from the Dutch border.

As stressed in recent articles by Graf and Arthur Butz, the deportations of Hungarian Jews are an extremely important element of the extermination thesis. The transfer of Hungary's Jews represents the largest single group to be deported in 1944. We now know that while some of the Hungarian Jews were retained to work in Auschwitz itself, large numbers were dispersed to over 386 camps, the great majority of these in the concentration camp system within the German Reich.[15] The largest groups were sent to Bergen-Belsen, Buchenwald, Dachau, Gross Rosen, Gunskirchen, Mauthausen, Neuengamme, Ravensbrück, and Sachsenhausen.[16]

In this connection it is perhaps worth reminding that, by the summer of 1944, the alleged extermination centers in the east (excluding Auschwitz) were no longer in operation (see table 1). Auschwitz had become, in Franciszek Piper's words, "a center for distribution of Jewish labor." It is also clear, as Shmuel Krakowski concedes, that Jews sent to other concentration camps via Auschwitz were not registered as they awaited transfer from Auschwitz. It is thus safe to say that many Jews who were deported to Auschwitz were never registered until their arrival in the western camps.

At this time, we shall accept, as a provisional figure for the unregistered inmates of Auschwitz (disregarding his estimation of their fate), the figures offered by Reitlinger. Reitlinger claims "550,000 to 600,000 may have been gassed on arrival."[17] We find that Jean-Claude Pressac corroborates this estimate; Pressac suggests that 630,000 victims were gassed.[18] We shall assume the higher of these estimates and analyze Pressac's figure of 630,000 unaccounted for at Auschwitz.

If we return to the camp system statistics, we find that, by assuming the 630,000 unaccounted-for inmates of Auschwitz arrived evenly throughout the months of April 1944 through January 1945, we arrive at an average number of 70,000 (630,000 9) transferees per month. Clearly some portion of these transferees died en route to their destination camps in the west. A precise estimate of the number who died in this fashion is difficult to determine. In some cases, trainloads arrived without any casualties. In other cases, the numbers were significant. If we assume that on average 1 percent of the transferees died en route to their final destination, that leaves 623,700 (630,000 - 6,300) transferees from Auschwitz still unaccounted for.

Clearly the extermination thesis is not the only possible solution to the question of the fate of unregistered prisoners at Auschwitz. Indeed, it seems much more likely, based on the statistics of the camp system and the above analysis, that unregistered arrivals at Auschwitz were deported or transferred to other camps. While a large number of these transferees died in those camps, their deaths there were for the most part recorded and have long been accounted for in the official literature. Thanks to the faulty methods of the official historians, there has resulted a double counting of these victims: once as unregistered "victims" at Auschwitz, and once at the camps in the Reich, where many deportees actually perished.