Unprecedented US Aid to Israel Began Under the Sinai Agreements

Donald Neff is author of several books on US-Middle East relations, including the 1995 study, Fallen Pillars: US. Policy Toward Palestine and Israel Since 1945, and his 1988 Warriors trilogy. This article is reprinted from the January-February 1997 issue of The Washington Report on Middle East Affairs (P.O. Box 53062, Washington, DC 20009).

In January 18, 1974, Egypt and Israel signed an armistice agreement officially ending their 1973 war. The agreement became known as Sinai I because it was signed in the Sinai peninsula and involved Israel's occupation of that strategic desert.[1] Sinai I had been achieved after a heavily publicized week of shuttling between the two countries by Secretary of State Henry Kissinger, who for his efforts was hailed in the US media as the Superman of diplomacy. It was only later that American taxpayers would learn that Sinai I laid the groundwork for the start of unprecedented massive aid to Israel by the United States, which continues to this day.

The aid program to Israel has amounted to the largest voluntary transfer of wealth and technology in history, far more than all American aid given to rehabilitate Western Europe under the Marshall Plan after World War II.[2]

Sinai I was widely hailed in the West as a major diplomatic accomplishment. The Arab world more realistically considered it merely a modest first step in ending Israel's occupation of Arab lands, held since 1967 and some of which remain under Israeli occupation today. Under the pact, Israel agreed to withdraw its forces west of the Suez Canal, thus liberating the Egyptian Third Army, which had remained surrounded by Israeli troops since the October war, and withdraw all its forces back 15 miles from the eastern side of the canal to positions west of the Gidi and Mitla passes. Between the two armies would be stationed a United Nations peace force.[3]

While Kissinger's diplomatic prowess was loudly credited in the United States for Sinai I, it was actually a secret agreement that he signed with Israel that had achieved the breakthrough. This secret commitment foreshadowed what was to become America's huge aid program to Israel. The covert Memorandum of Understanding contained ten detailed points, the most important being a far-reaching pledge that Washington would be responsive to Israel's defense needs on a "continuing and long-term basis."[4]

The potential massive dimensions of that pledge began to become clear less than two years later when Kissinger, after another highly publicized shuttle between Cairo and Jerusalem, achieved what became known as Sinai II, signed on September 4, 1975.[5] The agreement was especially favorable to Israel, and considerably less so to Egypt. The major article involving Egypt committed that most powerful of Arab countries to abstain from the use of force to resolve the Arab-Israeli conflict, meaning in the words of scholar Abdel Safty: "Thus, the agreement marked Egypt's military abandonment of its commitment to the right to liberate occupied Arab territories."[6]

"The aid program to Israel has amounted to the largest voluntary transfer of wealth and technology in history ... "

For the Arabs, there was the bitter realization that Israel's continued occupation of their territory was against official US policy and the major instruments guiding international civilized behavior since World War II: the UN Charter and the 1949 Geneva Convention Relative to the Protection of Civilian Persons in Time of War. Yet it was Israel, not Egypt, that profited far more from Kissinger's diplomacy.

Kissinger made no effort to demand that the occupation end in exchange for the treasury he was about to give Israel. Instead he assured Israel a level of annual aid at around $2 billion for the next five years and opened to Israel a cornucopia of other US assets never imagined by the average US taxpayer.[7] The irony was that the amount of aid was of such magnitude that it allowed Israel to maintain the very occupation that the United States said it opposed.

It goes without enumeration that the staggering amount of money given to Israel would have been of significant impact in helping America address its own domestic problems, especially those in the ghettos of the crumbling cities. 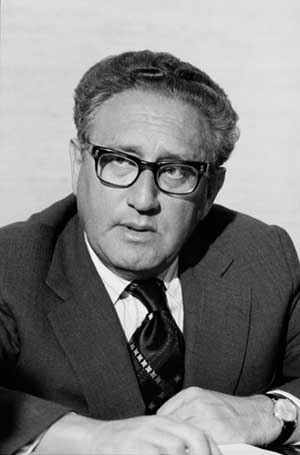 Henry Kissinger guided US foreign policy as Secretary of State (1973-1977) in the Nixon and Ford administrations. His secret agreements with Israel resulted in the Sinai accords and unprecedented US economic support to Israel.

Kissinger's series of secret understandings included a memorandum of understanding (MOU) with Israel in which he committed the United States to "make every effort to be fully responsive ... on an on-going and long-term basis to Israel's military equipment and other defense requirements, to its energy requirements and to its economic needs." This was made at a time when the US economy itself was reeling under the staggering costs of the oil boycott, which in turn had been imposed as a direct result of Washington's ostentatious support of Israel during the 1973 war.

The memorandum also officially committed American support against threats by a "world power," meaning the nuclear-equipped Soviet Union, and among other things promised:

For this colossal commitment of US wealth, technology and diplomatic support, Israel agreed to withdraw its forces between 20 to 40 miles east of the Suez Canal. This left well over half of Sinai under continuing Israeli occupation. Israel's major concession was to give up Egypt's oil fields, which lay on the western edge of the Sinai. The withdrawal resulted in Israeli forces being deployed east of the Gidi and Mitla passes, which were turned into observation posts. The United States pledged to set up and pay for stations manned by 200 Americans to protect both sides from violations. The arrangement replaced United Nations peacekeepers, who Israel opposed as being prejudiced against it even though UN reports from the field had proved to be rigorously objective over the decades.[11]

Defense Minister Shimon Peres summed up the benefits to Israel of Sinai II: "The .. . agreement [assures] us arms, money, a coordinated policy with Washington and quiet in Sinai ... We gave up a little to get a lot."[12]

Indeed, there is no example in history when one nation granted to another such enormous amounts of wealth and array of commitments as Henry Kissinger's Sinai II agreement. This perhaps help explain the tantalizing reference to Kissinger in the memoirs of Yitzhak Rabin, prime minister at the time of Sinai II, in which he wrote: "The story of Kissinger's contribution to Israel's security has yet to be told, and for the present suffice it to say that it was of prime importance."[13]