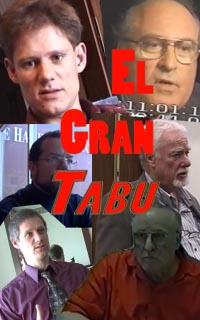 Two months ago if you had told me that I would be premiering a film at a major, mainstream film festival I'd have probably said you were losing it. And if you had told me that the film I'd be premiering would be a solidly revisionist movie in which people like Germar Rudolf and Ernst Zündel boldly present revisionist ideas and criticism of the Holocaust lobby, I might even have said you were ready for the funny farm. And if you had told me I'd be hobnobbing with Oscar-nominated actors and international superstars, and that my revisionist film would receive enthusiastic applause and a truly positive audience reaction, I'd have called the funny farm myself.

Yet everything I've described above is exactly what happened on June 7, 8, and 9 at the "Corto Creativo 07" film festival in Otay Mesa, an upscale suburb of Tijuana, the metropolis on the Mexico/California border.

It is difficult to express fully the importance of what happened at that festival, both in terms of barriers of the past being broken, and trails for the future being blazed. The Holocaust revisionist movement has taken a lot of serious hits the last few years, with some of our most important spokespeople being imprisoned, and many of us living in countries where we are afraid to speak up for fear of violence or government prosecution.

What happened in Baja those three remarkable days in June is enough to not only help revitalize a fatigued, persecuted revisionist community, but also to take Holocaust revisionism to new heights.

"Corto Creativo" is an annual film festival sponsored by the Universidad de las Californias (UDC) in Baja. I do not want to discuss the specifics of how I came to be invited to participate in the festival, but suffice it to say I was invited—as a VIP.

BINACOM is a sponsor of the Corto Creativo festival, and its president addresses the festival, which is also attended by Mexican federal, state, and municipal politicians.

As you can see, this is a serious, mainstream film festival, sponsored by a well-known university, attended by Hollywood celebrities, and organized by a professional educator who is the vice-president of an educational institution composed of major universities in the U.S. and Mexico.

Surely, this would be the last place you'd expect to find Bradley Smith.

And yet there I was, an invited guest at the festival — a VIP in fact — attending all the events, hobnobbing with celebrities, and premiering the first 32-minute cut of my revisionist film "The Great Taboo" (in Spanish, "El Gran Tabu"). I had been given the most prestigious time slot of the festival—the Friday evening screening. I had been allowed one hour forty-five minutes to give my talk, show my film, and afterward to hold a question and answer session. No one at the festival received more time. The organizers were friendly and very cooperative. Whatever help I needed, I was given—even free Spanish-language subtitles for my film!

For revisionists, it might seem too good to be true.

But it wasn't. In fact, it turned out better than I could have imagined. "El Gran Tabu" featured Germar Rudolf, Ernst Zündel, and me. In the film, we discuss revisionist theory, free speech, Zionism and 9/11, and other hot-button topics freely and without constraint. This is a solidly revisionist film. No excuses, no apologies.

There were perhaps two hundred people in the audience when my film was screened. The reaction from the audience, made up predominantly of film students, teachers, and filmmakers (mostly from south of the border), was completely positive. This was a mainstream audience—no revisionists—and yet I might as well have been making a presentation at the Institute for Historical Review. The young people at this festival expressed only support and earnest curiosity. There was not one hostile gesture, not one expression of dismissal.

I even had a lively on-camera exchange with Maria Conchita Alonso, during which she and I discussed the reaction of the professorial class in Venezuela to President Hugo Chavez's recent closing of an opposition TV station (this exchange related perfectly to my talk at the festival, which dealt with the response of the American professorial class to Holocaust revisionist ideas).

The Holocaust lobby has always feared the day that revisionist ideas—uncensored and not filtered through a Holocaust lobby mouthpiece—finally reach a mainstream audience. And the Corto Creativo festival showed that the lobby's fears are almost certainly justified: When a mainstream audience has the opportunity to view a professionally produced film about revisionism, the reaction is overwhelmingly positive.

A can of worms for the Holocaust Industry was opened in Baja last week. This could very well be the start of something big. After I was finished with the screening, person after person came up to me with different networking ideas and connections at universities and other venues on both sides of the border. Others volunteered to help me with production, editing, or anything I needed. I was really very surprised by this, and rather moved.

We're going to be taking this show on the road, and we are going to include in our road show the fastest growing market in North America—the Spanish-language market. This is a market heretofore untouched and un-exploited by revisionist activism—until now!

By the third day of the festival, some kind of "Holocaust education" organization that had been making a noise about my appearance at the festival created enough of a fuss that when the president of BINACOM, a professor who claimed to have lost relatives during the Holocaust, addressed the audience, she felt the need to devote her speech to denigrating revisionism, attacking me from the stage, slandering me as a racist and the representative of an "ideology" of hate.

But she did not address one word from the talk I had delivered, and not one word from the film. As I told her during her Q&A, she was the perfect example of the behavior of the American professorial class that I had addressed in my speech. She made my case. She would not address any revisionist text, no matter how simple. She would only attack and slander the individual who wrote it (I have this entire exchange on film).

And then I experienced something, again, that I had not expected. The young people in the audience stood with me, and openly challenged the professor's irrational denunciation of my presence at the festival.

How many times have revisionists been a lone voice surrounded by a hostile crowd? And yet there I was, with the full support of a young, mainstream audience, and it was the anti-revisionist professor who was the lone voice.

These were three days I will remember for a long time. And three days that the Holocaust Industry may soon come to remember with despair. Because something new was demonstrated at this festival: Give revisionists access to an objective, mainstream audience, and the falsehoods of the Holocaust lobby won't stand against the facts of revisionism and the argument for intellectual freedom.

And, thanks to this conference, I'm going to have many more opportunities like this, in a market where groups like the ADL have very little, almost no, pull at all.

This is the beginning. The beginning of something that could be very big for us. Initial preparations are already underway for the next screening of "El Gran Tabu," which is currently being updated to include footage from the Corto Creativo festival.

Last December, when I spoke at the Tehran Holocaust conference, I felt as though I were part of something unique and groundbreaking. I was, but I am more enthusiastic about what has happened here at the Corto Creativo 07. I made connections here with people with whom I can stay connected because they are "local," not thousands of miles away on another continent. And because I can really stay connected with these new connections, the opportunities to take this work on the road have suddenly blossomed in a dozen different directions.

There will be more to say very soon but, for now, I'll leave you with this: The Corto Creativo festival in 2007 demonstrated that what we've all been working toward these many years is fully attainable. I'll keep you informed of what's coming next.

The revisionist film that DESTROYED a film festival!