The chemical engineer and former math teacher Vincent Reynouard is a well-known French figure in the revisionist world. A very close friend and colleague of Professor Robert Faurisson, he calls the current “post-revisionists” Faurisson’s heirs.

Born on February 18, 1969, in Boulogne-Billancour to wealthy parents (both his parents were physicians, and his father a mayor at some point), he began his main activities as a revisionist in the early 1990s while he was still a university student. He created the “Norman Association for the Awakening of Citizens” (ANEC), which published the revisionist newsletter Nouvelle Vision, which later turned into a full-fledged magazine.

His first criminal charges resulted from brochures he had sent anonymously to 24 high school students who had won a history-writing contest called “Resistance and Deportation.” The brochure contested the existence of homicidal gas chambers in German-controlled areas during World War II. On 8 October 1992, the Caen Court of Appeals sentenced him for this to a suspended prison term of one month and a fine of 5,000 francs for denying one or more crimes against humanity.

In 1997, he published a book titled The Massacre of Oradour, for which he became quite notorious. In it he claims, based on a wide variety of evidence, that the Waffen-SS did not commit a massacre against the civilians of the French village of Oradour-sur-Glane in 1944, but that it was an accident caused by hidden resistance explosives. The book was subsequently banned by the French authorities. He repeated his hypothesis on a videotape and DVD, which were also banned in 2001. In June 2004, the Limoges Court of Appeals sentenced him for this book to two years in prison, 18 of them on probation.

This persecution did not end his desire for free inquire into the Holo­caust question, though. Quite to the contrary, driven into the corner and with no way out, he stepped up his activities by establishing his own or­ganization called Pour une Histoire Débarassée des Nombreux Men­songes (PHDNM; For a History Cleansed of Numerous Lies; it was later renamed to Pour une Histoire Libre et Indépendante, For a Free and Independent History), and in 2003 he launched his new revisio­nist magazine Sans Concession (Without Concession). As of now he has published 91 issues of it (many of them multiple issues in one edi­tion). Numbers 9 through 75 have been posted on CODOH as free PDF downloads since 2012 (see tinyurl.com/noaeyds), and many previous issues are still for sale on one of Reynouard’s websites (tinyurl.com/osph487).

It is needless to say that his persistence in exercising his right to controversial speech led to more persecution. On 8 November 2007 he was sentenced to one year in prison and 10,000 euros fine by the Criminal Court of Saverne for denying crimes against humanity by having written and distributed the brochure Holocauste: ce que l'on vous cache (Holocaust: What They Are Hiding from You) to museums, tourist offices and town halls throughout Alsace. The French International League against Racism and Anti-Semitism (LICRA), a French organization comparable to the ADL in the US, was awarded 3,000 euros in damages.

In June 2008, he was sentenced again, together with the Belgian revisionist Siegfried Verbeke, by the Brussels criminal court for expressing his revisionist views.

To avoid spending time in prison, Reynouard went into hiding for a year in Belgium. In February 2009, however, the Belgian investigative journalists Frederic Loore and Manuel Abramowicz tracked him down and published his whereabouts online and in the French weekly Paris Match. Reynouard was arrested on July 9, 2010, and extradited to France where he was imprisoned at Valenciennes to serve his sentence.

Released after nine months of detention in April 2011, he remained under judicial supervision and got into the judiciary’s crosshairs again for the distribution of a revisionist CD in 2009 to 120 high schools. Among other activities at this time, Reynouard wrote in the French rightwing weekly journal Rivarol in November 2011, and created his revisionist website phdnm.org.

In 2013 he launched his own video channel at sansconcessiontv.org, where he keeps posting his revisionist documentaries, news and opinion clips. One of his documentaries which attracted more attention than usual is “On a tous 70 ans,” in which he explained that the commemoration of the 70th anniversary of the landing in Normandy claimed to have been the beginning of a “liberation” was pure propaganda. He promptly got indicted for this and three more videos, and on February 11, 2015, he was sentenced to two years’ imprisonment plus a hefty fine by the Criminal Court of Coutances after having defended himself without a lawyer.

However, the prosecutor Renaud Gaudeul, noting that the sentence imposed exceeded the limits set by the law, resolved that “this sentence was illegal,” and he himself filed an appeal. On June 17, 2015, the Court of Appeal of Caen reduced the sentence to one year in prison without an additional fine (see phdnm.org with English subtitles).

The latest act of persecution occurred in May 2015, when he was sentenced to another two months in prison for an article he had published four years earlier in Rivarol, in which he had once more challenged the veracity of the orthodox Holocaust narrative. 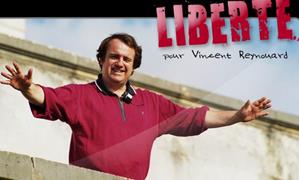 As a result of all this persecution, Vincent Reynouard finally gave up on France and left the country in June, going into exile permanently, or so he hopes (see his video “Je suis désormais réfugié à l’étranger”, “I am now a refugee abroad”; sansconcessiontv.org). In fleeing, he had to leave behind his archives and his second wife, who once loyally supported his revisionist endeavors, but she has come to realize that a life by Vincent’s side is one of blood, sweat, toil and tears, and that’s the last thing she wants. Vincent is now a lonely, homeless, jobless refugee strugg­ling to recover from this utter destruction of his existence by the French authorities.

We will keep on following Reynouard’s activities as he continues his seemingly unending struggle for his right to free inquiry and free speech on the Holocaust.

Any contact with him has to be indirect for the time being. Again, as in 1996 through 1998 with Germar Rudolf when he fled Germany, the Belgian revisionist Siegfried Verbeke has decided to once more lend Vincent a helping hand. You can write letters to Vincent by mailing them to Verbeke at Italiëlei, 203B, B-2000 Antwerpen, Belgium. For donations please see the instructions given at phdnm.org.