On April 18, 1988, an Israeli court solemnly declared "without hesitation" that a simple Ukrainian-born auto worker, John Demjanjuk, was "the sadistic motorman who had operated the gas chambers at the Nazi death camp in Treblinka." When the verdict was announced, hundreds in the Jerusalem courtroom jumped to their feet and launched into gleeful shouts of "Death! Death! Death!"

Five years later – and just as we were wrapping up this issue of the Journal – Israel's Supreme Court acquitted Demjanjuk of the hideous charge of helping to kill hundreds of thousands of Jews. In the face of compelling new evidence, it apparently decided that acquittal was the least damaging way out of what had become a great embarrassment for the Zionist state. John Demjanjuk's terrible 16-year ordeal has meant destruction of his good name, financial ruin for his family, and seven years imprisonment, five of them under sentence of death. Along with all others who stood with him, we join in expressing joy at this victory of justice. Demjanjuk must now be permitted to return without delay to his family in America. Ignoring for the moment Israel's role in the case, the actions of our own government should shame every American who cares about justice and fair play. The acquittal is a devastating indictment of the "Office of Special Investigations," the US government agency established to track down "Nazi war criminals." In its zeal to "get" Demjanjuk, the OSI, it later turned out, suppressed and threw aside – in at least one case, literally – evidence that OSI officials knew could have helped to exonerate this naturalized American citizen. Now, more than ever, it is time to shut down the OSI. 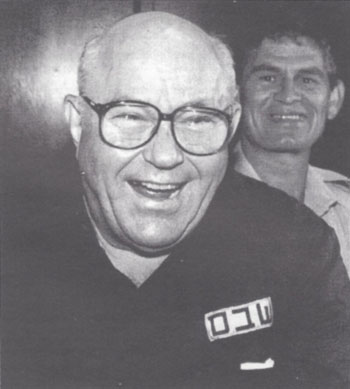 Even more culpable, though, have been the US Congressmen and Senators who dutifully voted, year after year, to continue funding the OSI. Throughout this entire affair, Washington's politicians and much of the establishment media fearful of the power of America's most formidable special interest group – put an alien agenda above all else. To protect their privileged positions, they bowed to the demands of the Holocaust lobby in this assault against justice and the rights of American citizens\. There was never any legal justification, for example, for the United States to turn Demjanjuk over to Israel – a country that did not even exist at the time of the alleged crimes. The Zionist state had no more right to try Demjanjuk than, let us say, the Vatican has to try Catholics living in the United States for crimes allegedly committed in Brazil. By handing him over, the US government recognized Israel's bizarre claim to act in the name of Jews everywhere.

To their everlasting credit, a handful of courageous Americans dared to defy the powerful "Never Forget, Never Forgive" lobby. We remember, in particular, Patrick Buchanan, Ohio Congressman James Traficant, and Cleveland businessman (and good friend of the IHR) Jerome Brentar.

Because they demanded justice for Demjanjuk, these courageous men were vilified as anti-Semites and "defenders of Nazi war criminals." These three are owed a great apology. But given the character of Alan Dershowitz, Marvin Hier and their like, it would be foolish to expect any expression ofhumility or contrition.

Happily, the acquittal of Demjanjuk is an important defeat for the mighty Holocaust lobby which Britain's chief rabbi, Immanuel Jakobovits, once accurately called "an entire industry, with handsome profits for writers, researchers, filmmakers, monument builders, museum planners and even politicians."

We don't expect many newspapers to stress the point, but the acquittal is also an important vindication of the cause of historical revisionism. For one thing, revisionists have again been confirmed in their decades-long insistence that "eyewitness" testimony – even of Jewish "Holocaust survivors" – must be regarded with the greatest skepticism.

In his highly-publicized trial in Jerusalem, which had many of the elements of a show trial, five Jewish "Holocaust" survivors declared under oath that they recognized Demjanjuk as the mass murderer of Treblinka known as "Ivan the Terrible." The judges cited this "eyewitness" testimony as the most compelling evidence against the accused. Although the five "witnesses" conceivably could have been grievously mistaken, so fantastic and sensational was their testimony that the heavy presumption must be that they lied brazenly.

From the outset, Israel's leaders announced that the well-publicized 1988 trial of Demjanjuk would be an "educational" undertaking that would "teach" the world the "lessons of the Holocaust." The Demjanjuk case certainly does have some important lessons to teach – and we will have much more to say about them in the next issue of the Journal.

We appreciate the help of Mr. Fred Burkhart of Chicago, who took the photographs on pages 2, 15, and 17 of the July-August 1993 issue.