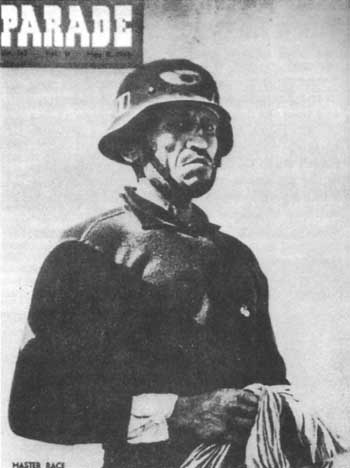 A common deception technique is to falsely caption or otherwise misrepresent an authentic photograph. Shown here is the front cover of a 1943 issue of the British magazine Parade, which was a tool of wartime Allied anti-German propaganda. It purports to show a disheveled and malevolent-looking German soldier, above the caption "Master Race." Derek Knight, an Englishman who served during World War II with the British "Army Film and Photographic Unit," revealed later that the man in this photo was actually an uncomprehending Egyptian who had been found on a Cairo street. He was persuaded to put on German helmet and a uniform-like jacket, and to permit himself to be photographed.