Was General de Gaulle a “Revisionist”?

Charles de Gaulle and the Extermination of the Jews
by Jean-Marie Boisdefeu
Published: 2005-09-01

Already by 1984 Professor Robert Faurisson had noticed that General De Gaulle never pronounced the words “gas chambers” for the simple reason that he did not believe in them[1]; nevertheless it wasn’t until the occasion of the Papon trial that people finally start publicly to question De Gaulle’s attitude toward the extermination of the Jews by the Germans.

For some, the general knew – and, by the way, from Pius XII to Papon everybody knew – but he held his tongue to the extent of not making any allusion to the extermination of Jews in his War Memoirs. Thus De Gaulle showed an unforgivable lack of sensitivity that might be explained by a quasi-atavistic anti-Semitism. Terrified by such accusations, especially the accusation of anti-Semitism, other people reply that the general was not anti-Semitic at all, but that he simply did not know. He was simply unaware of the existence of extermination camps and their gas chambers; he was aware only of the deportation of the Jews and he deplored those events several times in his War Memoirs.

In fact, all of this is vague, confused, and perhaps even hypocritical:

Before studying in detail the arguments of each, let us remind ourselves of the chronology of some facts:

The first one who replied to the charge brought against De Gaulle was Henri Amouroux. In the Figaro-Magazine of April 10, 1998 (pp. 30 and 32: “Is De Gaulle guilty?”), the notorious historian and member of the Institute of France questions the eventual responsibility of the general for “the French ignorance in the face of the genocide.” Amouroux acknowledges that the genocide of the Jews was “addressed in a little way or not addressed at all by General De Gaulle” in his War Memoirs. This can be explained, he states, because the extermination and the role of the Vichy government were not well known to the French of 1945. He backs his claim with the fact that in 1945 newspapers like Le Monde and Le Figaro did not contain any information about this topic. 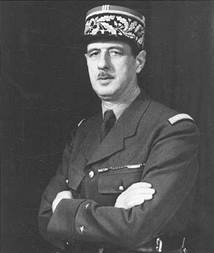 This analysis is really astonishing:

Thus we must exclude the possibility that De Gaulle didn’t hear about the extermination of the Jews when he published his War Memoirs from 1954 to 1959. (Let me remind you that they were republished at least until 1970 without any correction of the original text.)

Responding to Gérard Boulanger, the defense lawyer during the Papon trial who remarked in his book Papon, un intrus dans la République, that De Gaulle never spoke about the extermination of the Jews in gas chambers or by other means (an observation that professor Faurisson has already made as we saw), Jean Foyer, a former minister of General De Gaulle and president of the Charles De Gaulle Institute, wrote in the November 8, 1977 issue of Le Figaro-Magazine, p. 11, that this was plainly false. Foyer then quoted the following excerpts from the War Memoirs (pagination from the paperback edition, Plon publisher; 1958 for the second volume and 1961 for the third volume):

Unlike what Jean Foyer claims, it is very difficult to admit that those excerpts, even if we accept that they all concern Jews, refer to a massive “extermination” of the Jews according to a plan. Of course the general uses the epithet “horrible,” but he restrains himself from using the words “extermination” and “gas chambers.” Those excerpts seem rather to speak about a “shameful persecution,” here the deportation of women, men and children under “horrible” conditions. This description is quite banal, since everybody would admit that the prevailing conditions in Auschwitz were indeed deplorable when the deportation of Jews from France was reaching its peak.

Breaking with the official history and in support of an article of Georges Broussine (Le Point, June 20, 1998) – an article which didn’t bring anything to the debate – former minister and De Gaulle’s biographer Alain Peyrefitte stated (Le Point June 27, 1998):

“I can state from his own confidences that the general never confabulated on this kind of things [sic], and was not informed about the existence of extermination camps. In volume III of C’était De Gaulle (It was De Gaulle) I’m proposing to make public his private remarks. How could he be aware of their existence if Churchill and Roosevelt apparently were ignorant of it[2] Why didn’t they react?”

Meanwhile, Peyrefitte was protesting against the claim that the general “had omitted to speak about the Jews” in his Memoirs, but based his proof on the first three excerpts among the four quoted by Jean Foyer – and we have already stated that they are unconvincing.

Some took this promise for fact and did not even wait for the publication of volume 3 before using it as a source. In this case Jean-Louis Crémieux-Brilhac (former departmental information manager of the Free France in London) writes in La lettre des Résistants et des Déportés Juifs (“The Letter of Resistance Members and Deported Jews”) Sep-Oct 1998:

“General De Gaulle will be able 20 years later to tell Alain Peyrefitte that until a very late date he had not known about the existence of the extermination camps.”

As we know, Alain Peyrefitte has passed away since then but fortunately he had time to correct the volume 3 [published by Fayard in 2000]. From it we retrieved the following:

To summarize, Peyrefitte didn’t hold his promises; he just recalled some excerpts from the Memoirs that Jean Foyer already had quoted and these do not refer to an extermination of the Jews.

But the general’s two former ministers are not just producing unconvincing quotes; they are also omitting some excerpts that would enlighten us better about what the general thought about this question:

The last excerpt, let’s remind ourselves, is taken from volume 3 published in 1959, and republished without any further correction until 1970. We can, without caricaturing, summarize the general’s position like this: The persecution of the Jews with the collaboration of Vichy (as we saw, the general keeps himself from talking about extermination) was certainly odious and deplorable, but it can be considered as an accessory fact with an importance similar to the Cagoule affair (about which not one Frenchman in a hundred could say more than three words).

We can still refer ourselves to a choice made by Admiral De Gaulle, the son of the general, from speeches and messages delivered between 1946 and 1969 and published in 2000:[3] The only interesting excerpt can be found in a speech made on April 30, 1947 in Bruneval during the inauguration of the fighters’ memorial. It is still consistent with the style we found in the Memoirs:

“The six-hundred-thousand men and women from our homeland who died on the battle field, at the execution post, or of misery in the camps, died for France and for France only.”

It seems we can reasonably conclude from this that: