Weber Speaks on Jewish Power at IHR Meeting in Virginia

At a special Institute for Historical Review meeting in Arlington, Virginia, on Saturday, March 2, 2002, IHR director Mark Weber traced the rise of Jewish power in the United States over the past 60 years and emphasized the immense power and influence today of Jews in America’s political, cultural, intellectual and economic life.

Among the 38 men and women who attended this meeting – the first IHR event in years in the Washington, DC, area – were two nationally prominent writers, several attorneys and other professionals, and a gratifying number of younger people.

Although Jews make up no more than three or four percent of the total U.S. population, said Weber, they now wield greater power than any other single ethnic, racial or religious group. In this regard he cited a private conversation in 1972 between President Richard Nixon and the prominent religious leader Billy Graham, which had just been made public, during which the two agreed that Jews have a “stranglehold” on the U.S. media, and that as a result “the country’s going down the drain.” 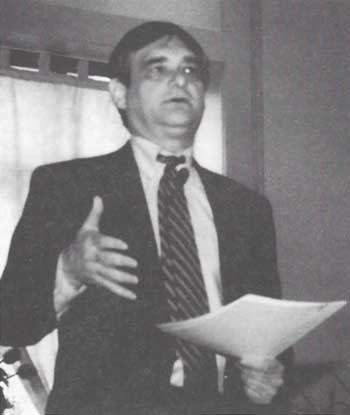 In his lecture, entitled “Jewish Power: Its Meaning for America and the World,” Weber said:

The most direct and obvious victims of Jewish-Zionist power are, of course, the Palestinians who live under Israel’s harsh rule. But as the IHR has made clear for years, in truth we Americans are also victims – through the Jewish-Zionist grip on the media, and the organized Jewish-Zionist corruption of our political system. We are pressured, cajoled, flattered, and deceived into propping up the Jewish state, providing it with billions of dollars yearly and state-of-the-art weaponry, and even sacrificing American lives – as in Israel’s 1967 attack on the “USS Liberty” – thereby making us accomplices of its crimes.

The truth is that if we held Israel to the same standards that we apply to Serbia, Afghanistan and Iraq, U.S. bombers and missiles would be blasting Tel Aviv, and we’d be putting Israeli prime minister Sharon behind bars for war crimes and crimes against humanity.

“Today the danger is greater than it’s been in many years,” said Weber. “Just the other week the French ambassador in London, Daniel Bernard, privately acknowledged that Israel – which he called ‘that shitty little country’ – is threatening world peace. ‘Why should the world be in danger of World War III because of those people?,’ Bernard bluntly said. Influential Jewish organizations and political figures, and much of the Jewish-dominated media, in collaboration with Israel’s leaders, and backed by this country’s pro-Zionist ‘amen corner,’ are now prodding our country into new wars against Israel’s enemies.”

Throughout history, said Weber, Jews have time and again wielded great power to further group interests that are separate from, and often contrary to, those of the non-Jewish populations among whom they live. This creates an inherently unjust and unstable situation that, as history shows, never lasts. As Weber put it: “We are today witnessing, and enduring, merely the most recent enactment of a great and tragic historical drama that has, through the centuries, played itself out time and time again, in country after country, in different cultures and ages.”

Weber also spoke about the Institute’s work and impact in recent years, including the international attention generated by the IHR’s role in last year’s revisionist conference in Beirut, which was canceled by Lebanese authorities under pressure from the US government and Zionist organizations. He also reported on preparations for the 14th IHR Conference in southern California, June 21-23.